Buffeted by unending tides of grief 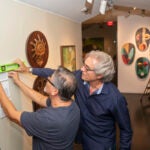 Professor of English Namwali Serpell plunges into her own experiences of grief — the heartbreaking loss of her older sister, who died at age 22 — for her anxiously awaited and soul-stirring new novel, “The Furrows.”

“It came very literally from a dream,” said the Zambian American writer, about her second novel after her acclaimed 2019 debut, “The Old Drift,” a historical saga about three families — Zambian, Italian, and Indian. Serpell dreamt she was swimming with her nephew Chedza. “The storm picked up. The waters rose. The wind rose. Very much like the first scene in the novel,” she described. “I was trying to swim him to shore. I woke up in a bit of a panic, my heart pounding — both with a sense of tenderness and love, and a sense of fear and imminent loss. This reminded me very much of dreams that I had about my late sister when I was mourning her.”

The first half of “The Furrows” opens with Cassandra, a 12-year-old girl whose 7-year-old brother, Wayne, appears to have drowned during a Delaware beach family vacation. His body is never recovered. The family is torn apart and roiling tides of grief alter Cassandra’s life, as she finds herself wrestling with the event over the years, reliving and rewriting it in her own mind.

“One of the things that I was trying to do with the overriding conceit of ‘The Furrows’ was enact, as Cassandra puts it, not ‘what happened,’ but ‘how it felt,’” Serpell said. “I was interested in how the dream life that I experienced with my late sister would create this kind of wave-like crashing of emotion over me. I would dream that she was alive and then I would wake to remember that she had passed. And every time I remembered, it was like she died again.”

In one of her earlier interactions with a therapist, Cassandra says, “I didn’t know how to accept death, though. I still don’t. I don’t really care to. Death is quite literally unacceptable, unreasonable, and unimaginable.” As a society, we often try to forget death, to disavow it, push it aside, or simply try to get over it, Serpell said.

“There are all of these different cultural forms that are shaped by that exact ambivalence that I make Cee [Cassandra’s nickname] articulate,” the novelist said. “Which is that death is unavoidable for us, but it is unbelievable to us. We cannot fathom — we are incapable of imagining a place beyond death that isn’t just another version of life — like heaven.”

Cassandra, who is mixed race, faces several instances of loss that play into the way she grapples not only with grief, time, and memory, but with her own sense of identity: first, the loss of her brother, her companion in being mixed race, and her Black father, who abandons her and her white mother, who is in denial over the death.

Serpell, who got her Ph.D. at Harvard in 2008 and joined the English Department last fall, said the second half of “The Furrows” was inspired by a dreamlike state she experienced while teaching at the University of California, Berkeley. In the novel Cassandra begins seeing her brother everywhere she goes. Here, Serpell says, the story plays with the idea of W.E.B. DuBois’ double consciousness — a feeling among racial minorities of being divided internally — as well as the Gothic trope of the doppelganger, a kind of supernatural twin.

The latter half of the novel also dives into the divisions that occur due to class, both between individuals of different races and those of the same race. Serpell, for instance, underscores how Cassandra’s “bourgeois” upbringing and education places her life in stark contrast with that of a homeless man she meets who shares the same name as her deceased brother. Everywhere, both internally and externally, a person and nation in conflict with themselves.

“A through line from the first half to the second half of the novel is what Anne Cheng calls ‘racial melancholy.’ She says that this is a very particular aspect of American culture,” Serpell said. “The racialized other is a kind of complicated loss for the nation itself, and this structures the way that racialization in America works. It’s a kind of failed mourning, both of the nation’s ideals, and of the huge numbers of actual people who have been sacrificed to imperialist, capitalist, racialized violence.”