Bacow counsels first-years to be ‘slow to judge, quick to understand’ 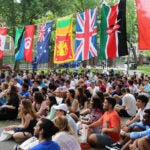 Keep open mind with people, ideas to make most of next four years, president says

In his last Convocation address as Harvard president, Larry Bacow urged the Class of 2026 to take advantage of the University’s diverse environment to learn to listen to those with different views in order to begin repairing the world in a time of extreme polarization and echo chambers.

Bacow, who will step down in June 2023, spoke at Tercentenary Theatre Tuesday afternoon in a ceremony that officially welcomed the newest members of the Harvard community.

“Our motto at Harvard is Veritas,” Bacow said. “It is more than a motto. It is the reason we exist, to seek the truth. But truth needs to be tested and needs to be revealed and that can only happen on the anvil of competing ideas. If you really seek the truth, it’s important to engage with people who think differently from you. Even more importantly, you need to be willing to change your mind in the face of a better argument or new information. Only when you have this experience will you be well equipped to make a difference in the world.”

Harvard aspires to prepare students to live and work in a complex and diverse global community, Bacow said, by admitting students from diverse backgrounds in terms of countries, cultures, genders, races, and ethnicities. The 1,649 members of the Class of 2026 hail from 49 states and 93 countries First-generation college students represent 20.3 percent and international students 13.9 percent.

“Our job is to prepare you for the world you will inhabit when you leave this yard,” Bacow said. “We are here to prepare you to deal with that world, a world that will challenge you and sometimes even offend you. And I hope you will master these skills while you are at Harvard so that you can devote your life to repairing a world that we all know is far from perfect.”

Bacow also called students to relish the first memories of their College years, including their first class, their first assignment, their first grade, their “very first burger at Bartley’s,” and the lifelong friendships they are about to form with roommates and classmates. Bacow told the audience the story behind his 53-year-old close friendship with Alan, his freshman roommate at MIT, a relationship he would have thought unlikely because of their differences.

“He was big,” said Bacow. “I was small. He was messy. I was neat. He brought his stereo to campus and loved to study with the music blasting. I liked to study with the stereo off. He liked to listen to the Rolling Stones, The Who, and The Band. I liked Bob Dylan, James Taylor, and Joni Mitchell. Alan liked almost all New York sports teams. I hated them. He was politically quite conservative. I was anything but.”

Yet their friendship took hold, Bacow said, because they focused on what they had in common rather than their differences, always respected and learned from each other, and helped one another out — it was Alan who fixed Bacow up on a blind date with Adele Fleet, now his wife of 47 years.

“During your time here, please don’t overlook your Alan,” said Bacow. “Please don’t judge people quickly based on their outward appearances or your first impressions. One of the many reasons that we admit students literally from all over the world, people with many different life experiences and many different interests, is because we learn from our differences. As you get to know your roommates and your classmates, please be slow to judge and quick to understand. If I had made the mistake of being quick to judge and slow to understand, not only would Alan not have become a lifelong friend, Adele and I would not have had two kids and four grandchildren. Look at what we would have lost.”

In his remarks to welcome the first-years, Rakesh Khurana, Danoff Dean of Harvard College, also emphasized the importance of being open to changing one’s mind, to discover the truth not only by rejecting conspiracy theories and disinformation, but also by overcoming the temptation to conform or believe that one holds the right views and that there is nothing to learn from people who think differently.

“Searching for the truth requires taking risks and being comfortable with being uncomfortable,” said Khurana. “It means inviting criticism. Choosing curiosity over certainty. To make the most of what Harvard has to offer — and to figure out what you can offer to Harvard and to society —  you are going to have to be willing to choose this riskier, less certain path through these next four years.”

Katie O’Dair, dean of students at Harvard College and newly named University Marshal, encouraged the first-years to embrace the uncertainty and nervousness of the moment as they make their transition from high school to College, to take the chance to discover who they are and who they want to become, and to make themselves at home.

“You belong here,” said O’Dair. “This is your home; your community; your family. It’s yours now. And in your time here, you can choose to be anyone you want. Just as the person you were in high school doesn’t need to be the person you are at this very moment, it’s highly likely that the person you are tomorrow, or next week, or next year will be different than who you are today. But whether you are the first or the 15th in your family to attend college; whether you traveled across the globe to be here or simply across the Charles River, Harvard is your home. It is home for you, and together it is our collective home, and our collective community, and you are a part of it. You are not a guest at Harvard; you are Harvard.” 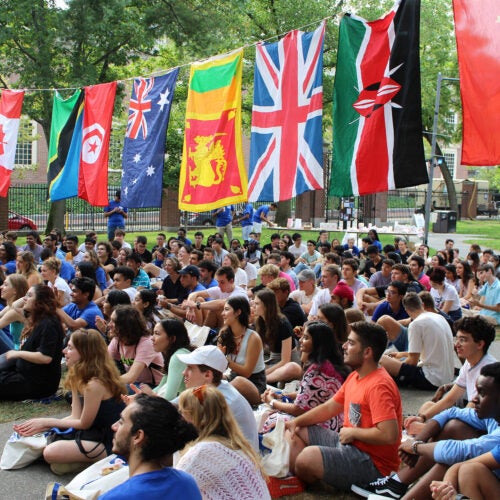 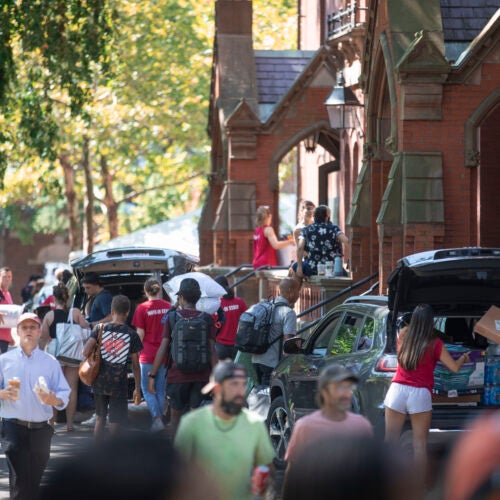