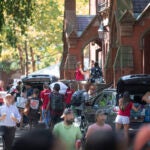 After two years of pandemic-induced virtual programming, Harvard College’s pre-orientation activities roared back to campus, bigger and better than ever.

The Dean of Students Office’s (DSO) pre-orientation programs — or “pre-o’s,” as they’re colloquially known — are meant to familiarize incoming first-year students with their classmates and in some cases the campus and the Cambridge-Boston area.

“It’s been magical,” said Andrew Hollis, who directed the First-Year Outdoor Program (FOP), the largest of the pre-o’s, which this year took 447 students on explorations of New England’s mountains, lakes, and forests. “The spirit of FOP is ultimately about building a community for these first-years.”

Lily Castro, the DSO’s director of orientation and family experience, said pre-o programming has helped soften the landing for thousands of first-year students. According to Castro, roughly two-thirds of first-years take part every summer. Such high attendance reflects both the enthusiastic engagement of first-years and the hard work of the many staff and upperclassmen who lead the programming. The mission, she said, is to make the move to College “as special and celebratory as possible.”

There are currently six pre-o programs, all of which are non-competitive (no doubt a relief for any newly minted Harvard student). The First-Year Arts Program (FAP) explores various artistic pursuits while the First-Year International Program (FIP) partners with the Harvard International Office and the Office of International Education to welcome first-years from around the world. The First-Year Retreat and Experience (FYRE) introduces first-generation, low-income students and those from under-represented backgrounds to the rhythms of College life, and the First-Year Urban Program (FUP) facilitates public-service projects and emphasizes the value of social change. The Leadership Institute for the First-Year Experience (LIFE) helps participants “identify what leadership means to them,” LIFE Director Miguel Tejada explained.

Pre-o students with all levels of experience participate, and Harvard’s pre-orientation leaders strive to build welcoming and inclusive environments for all the students. As such, FAP participants don’t need any formal artistic training to take part in activities, which culminated in the First-Year Arts Pageant, a wide-ranging showcase featuring skits, dance numbers, and dazzling visuals. Another well-attended event is FYRE’s “Harvard I Messed Up,” an open-mic celebration of failure and feeling safe in one’s own skin.

One of the core messages of Harvard’s pre-orientation programming is that students can find many ways to thrive on campus. FYRE, for example, stages on-campus scavenger hunts to acquaint participants with key landmarks and facilities. On a less tangible (though no less vital) level, it teaches first-years how to navigate the “hidden curriculum” that underpins so much of College life, including office-hours etiquette and time-management strategies.

First-years spent this past week exploring the world beyond Harvard Yard with FUP students carrying out community-service projects in Dorchester and FOP members venturing as far afield as Maine and Vermont. FIP Director Nicole Garcia said the return to in-person programming and providing international students “an even stronger sense of place” is thrilling for her team.

Garcia said that at the conclusion of a past program one student told her, “I feel like I’m home now.” By the end of this year’s pre-orientation, hundreds more should feel the same way.