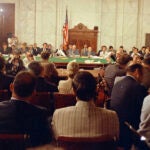 Police arrested five burglars inside Democratic National Committee headquarters at the Watergate complex in Washington, D.C., on June 17, 1972. Within a day, their ties to President Richard M. Nixon’s re-election campaign emerged and thus began the slow unraveling of Nixon’s presidency known as Watergate. Garrett Graff ’03, historian and author of a new book, “Watergate: A New History,” spoke to the Gazette about the 50th anniversary of the scandal and its legacy. The interview has been edited for clarity and length.

GAZETTE: The burglary and arrests at the Watergate are what’s thought of as the beginning of the Watergate scandal, but you say Watergate is more accurately emblematic of a way of thinking that drove decisions in the Nixon presidency. Can you explain?

GRAFF: I think America misremembers Watergate as an event, the break-in of the DNC offices, when history has shown us that Watergate was more of a mindset. It was this dark, paranoid, conspiratorial, corrupt mindset that enabled a whole series of crimes and abuses of power that permeated the entire Nixon White House from the campaign of ’68 right through his resignation in ’74. It encompasses a dozen distinct but interrelated scandals with overlapping players, differing motives, differing targets that led the Nixon administration deeper into this morass of scandal. In many ways, the burglary on June 17, 1972, was the equivalent for America of walking into the second or third act of a play without understanding that the play had been underway for some time before. 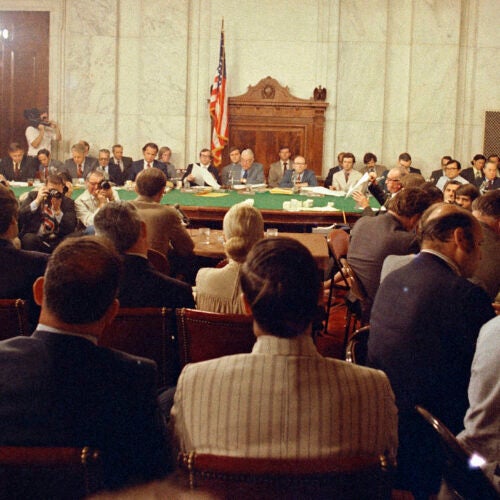 GAZETTE: What would be the first scene of the first act of that play?

GRAFF: What I tried to argue in the book is when you look at the full scope of the sins of the White House it was the Chennault Affair in the fall of ’68, which stands as one of the greatest political scandals in American history, one of the only times there are credible allegations of, effectively, treason against a senior U.S. official. It was only within the last decade that we understood the centrality of it at all to Nixon’s mindset and what unfolded there. But the Chennault Affair — when Richard Nixon, as a candidate, interfered with the Paris peace talks to keep the Vietnam War going for his own political benefit — is the original sin that drives the Nixon administration and the Nixon White House to ever deeper and more outlandish and complex cover-ups. That’s where it’s really important to understand the full umbrella of Watergate. There were so many crimes and schemes and abuses of power underway at any given time that it became impossible for the Nixon White House to come clean about any of them, even ones where they were more innocent than believed, without unraveling other schemes and crimes. And so, cover-up becomes a way of life for them.

GAZETTE: Watergate is the most examined political scandal in U.S. history. Congressional hearings were broadcast live on TV and then rerun at night; it also inspired dozens of books, memoirs, feature films, documentaries, even podcasts. What is there to learn that we didn’t know before?

GRAFF: There are three big buckets of information that are new, each of which refine and change the story in material ways. The first and biggest in many ways, is the identity of Deep Throat. No one had ever sat down and tried to write the story of Watergate knowing who Deep Throat was. It really reorients the story in terms of putting the FBI and the Department of Justice much more front and center in that story and the “succession” politics of the Justice Department playing out there.

The second bucket is what I would loosely call the newly declassified documents. All manner of new documents have come out in the last 25 years, everything from George Steinbrenner’s case file to the blockbuster documents about the Chennault Affair. That was something that until about 10 years ago, people didn’t even really understand was connected to Watergate at all, and it turns out it’s an incredibly central thread of the story.

And then, the third is the Nixon tapes. There were obviously a set of Nixon tapes that came out contemporaneous with the events, including the smoking-gun tape. But there has been a series of three volumes of further transcripts from the Nixon tapes that were done by historians Stanley Kutler, Douglas Brinkley, and Luke Nichter that were published beginning in the late ’90s and then running through 2016-ish. Those add incredible new nuance and texture and understanding.

GAZETTE: How is it that we still can’t say for sure who ordered the break-in or why? Are there other important questions that remain unanswered even after all this time?

GRAFF: One of the most fascinating and weird questions to wrestle with is H.R. Haldeman, who is seen as one of if not the most organized and competent chiefs of staff of any White House in the modern presidency. How did he allow this to spiral out of control in the way that it did? What really comes through to me in the research is just how little any of these people actually trusted each other and the rank corruption that unfolds amid all of them, all of the time, on all issues, even to their own detriment. Nixon casts aside one of his closest friends in Attorney General John Mitchell, even though it seems likely that John Michell didn’t order the break-in, basically because he didn’t trust the guy.

And you see that unfold after the burglary, where everyone runs for the hills, and no one is willing to have the hard conversation to figure out who was culpable and who wasn’t.

Wrapped up in that is a related but slightly separate and distinct question of what the CIA knew about the burglary in advance and what role, if any, did the agency have on the night of June 17, 1972? There is compelling but not conclusive evidence that the CIA knew a great deal and might have taken action to sabotage it. But that’s unproven, and we may never know or there might still be documents buried inside the CIA archives that come out some day that show that the CIA sabotaged the whole burglary.

Related to that is the truth of Martha Mitchell’s kidnapping. Again, there is compelling but not conclusive evidence that federal agents from either the FBI or the Secret Service, or both, were involved in holding her captive in California after the burglary. There’s a lot that we still don’t know about some of the specifics of this.

GAZETTE: Are there myths or misconceptions about Watergate that ought to be dispelled finally, aside from the abridged narrative of “All The President’s Men” that has so shaped the public’s understanding of this history.

GRAFF: That to me is a big one. Not to say that Bob Woodward and Carl Bernstein didn’t matter, but that they mattered in a way different than we have remembered over the years. I think the over-lionization of Woodward and Bernstein does a disservice to a number of individuals who deserve equal pride of place and equal laudatory heroism for their actions — on the Watergate Special Prosecution Force, on Sen. Sam Ervin’s committee, on Rep. Peter Rodino’s committee. Part of what makes the totality of Watergate so fascinating to me is what a compelling story it is of how power works in Washington. All of these institutions of Washington and government were necessary to force Richard Nixon from office. None of them could have done it on their own. The great lesson that Washington and crisis communications people, I think, learned out of Watergate is that “the cover-up is always worse than the crime.” And that turns out not to be true. The crimes of Watergate were, in fact, quite terrible and quite numerous, and the cover-up is actually the smallest slice of what ends up sinking Nixon.