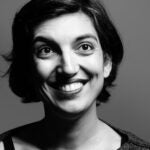 Fifteen minutes goes by in a flash, but it’s plenty of time for Emma Eun-joo Choi to deliver some audio “greatness” as the host of the new NPR comedy podcast “Everyone & Their Mom.”

The fast-paced smorgasbord of comedy, interviews, and life advice is tinged with the bizarre and personal, a combination that drew Choi, who is about to start her senior year, to comedy as a child.

“Part of the reason I came to Harvard was because of Conan O’Brien,” said Choi, who grew up binging the comedian’s offbeat late-night clips along with “Saturday Night Live” and “30 Rock.” “I also read Mindy Kaling’s memoir ‘Is Everyone Hanging Out Without Me?’ in seventh grade, and it changed everything for me. She wrote that she was a bad actor, but she wrote her own roles so she could cast herself in them. That was something I loved.”

Choi’s love for the smart and irreverent shows up all over “Everyone & Their Mom,” which launched in February and is produced by the same team behind the hit weekly news quiz show “Wait, Wait, Don’t Tell Me.” Past segments of “Everyone” include a critique of Choi’s grandmother’s kimchi recipe with celebrity chef Roy Choi, an interview about Harry Potter fan fiction with Pixar executive and “Turning Red” director Domee Shi, and grilling advice from chef/author Samin Nosrat.

Choi has found it equally — if not more — energizing to chat with the less-well-known. She called a Minnesotan who had set up a pay phone in his front yard, dug into the life of a rat expert, and, in a recent episode on graduation speeches, debriefed New York resident Jonathan Apana about a speech comedian Hari Kondabolu gave at Apana’s high school graduation.

“It was really nice that we got to create space on the show where people like Jonathan could laugh and have a good time, but also reflect on things that have impacted them that they may not have thought about before,” said Choi.

“Part of the reason I was tapped to do this podcast is because I’m willing to bring myself into it.”
— Emma Eun-joo Choi ’23

Choi’s other big creative love besides comedy is writing. She came to Harvard looking for other enthusiasts who could talk about books for hours and nurtured her literary talents in workshops with novelists including Gish Jen and Claire Messud. During a gap year in 2020, Choi started as an intern at “Wait, Wait” looking for levity during a dark time. She joined the production staff part-time in 2021, juggling her work responsibilities with her junior year course load. The experience wasn’t always easy, but it taught Choi a lot about work/life balance.

“I’ve had to let a lot of things go from my schedule to make room for this job while also being a student, and I’m not used to phoning it in on anything,” said Choi. “I’ve been pretty good about taking mental health breaks, but it’s a lot of work. Now I’ve definitely learned how to value my time, which is an excellent life lesson.”

Choi sees value in the personal as well as the side-splittingly funny and doesn’t believe the two approaches should be mutually exclusive.

Turning yourself into a public personality can be stressful, as Choi learned during her first few months on the job. She worked with an NPR voice coach on radio-friendly diction and studied how to make interviewing look effortless.

She also worked to develop boundaries between herself and her audience, deciding when an “overshare” was good comedy fodder and when it was best left on the cutting-room floor. She dealt with criticism and angry responses to her mere presence on the airwaves, and she learned a lot about how to thrive in the cutthroat world of show business.

“I think in comedy, especially, a lot of people are funny, and a lot of people are hard-working, but not a lot of people are nice,” she said, noting that her workplace is the exception to this adage. “Just being a nice person and saying yes to things will get you to open doors that you didn’t know were there. Comedy should be fun, and if stops being fun, then I can ask: ‘Why am I doing this?’”

This summer, Choi is living in New York, where she can finally meet some of her NPR co-workers in person and discover some emerging comedy talent to feature on the show. She’s also gearing up for her senior year and her senior thesis project: a collection of horror short stories.

“I think my comedy has really influenced my writing, because for me writing is just finding new ways to put words together, and the comedy comes in when you say words totally wrong sometimes,” she said. “If I get too deep into my fiction, I get very teenage angsty. If I get too into comedy, I become insufferable. So it’s good to switch off.”