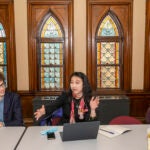 Finding something new — and true — to bring to a portrayal of historical figures as well-known as Thomas Jefferson and John Hancock is a challenge. But for the actors in the cross-gendered and racially diverse revival of the beloved musical “1776,” at the American Repertory Theater through July 24, history has proved a tool as well as a burden.

Informed by their own research and input from scholars like Annette Gordon-Reed, Carl M. Loeb University Professor, the female, nonbinary, and trans cast was able to bring fresh perspectives to Sherman Edwards and Peter Stone’s 1969 Tony Award winner, which depicts the Second Continental Congress struggling to draft the Declaration of Independence during a hot summer in Philadelphia.

To better understand her character, Jefferson, for example, Elizabeth A. Davis traveled to the statesman’s home, Monticello — twice. “The first time was right before we were going to start rehearsal,” back in 2020, said Davis. The current production — created by Diane Paulus, the Terrie and Bradley Bloom Artistic Director at A.R.T., and Jeffrey L. Page, co-director/choreographer — was originally scheduled to open that spring. “It was the day Monticello closed down for the pandemic,” Davis said.

When she was able to return, she stayed at the Clifton Inn, originally the home of Jefferson’s daughter. At this former estate, which the Founding Father designed, Davis felt the disconnect between “how beautiful and how aesthetic everything was” in the house and gardens and the former slave quarters. “We know that he was brilliant and did extraordinary things and also owned 607 people in the course of his lifetime,” said Davis. Being there, she added, helped her “really feel that contradiction.”

For Liz Mikel, who portrays John Hancock, research resulted in a more pleasant surprise about her character, who served as the president of the Second Continental Congress. “From what I could gather, John Hancock never bought or sold anyone,” said Mikel. Raised by an uncle after his father’s death, Hancock was one of the wealthiest Founding Fathers. “He inherited slaves after his uncle’s death, but he himself never bought or sold any person, so that’s good.”

An importer of wine and other goods, Hancock may have been at least partially motivated by a desire to evade heavy British levies, Mikel found. “He did not necessarily want to pay all of those taxes on all of those imports he was bringing in,” she said, noting that Hancock “went under the radar on some things” to avoid tariffs.

“He was a complicated man,” she said.

Both actors also spent some time reading up for the production, a co-presentation of the A.R.T. and Roundabout Theatre. Davis cites Jon Meacham’s “Thomas Jefferson: The Art of Power” and Gordon-Reed’s “Most Blessed of Patriarchs: Thomas Jefferson and the Empire of Imagination” and “The Hemingses of Monticello: An American Family.” (The A.R.T. has teamed up with the Boston Public Library to provide a reading list as well.)

The delay also allowed the cast to work with historians like Gordon-Reed and Vincent Brown, Charles Warren Professor of History and professor of African and African-American studies. “Having Annette Gordon-Reed available to us via Zoom twice and to be able to ask her specific questions about Jefferson was incredible,” said Davis.

It was also enlightening.

“They added a whole different level to all of the things that we’ve heard,” said Mikel.  For example, she said, “I never knew that there was a slavery clause in the Declaration of Independence, and that it had been removed.”

That clause, which would have outlawed slavery in the new nation, was sacrificed to win over the Southern states. However, the Northern states also profited from the trade in enslaved persons, as the show-stopping song “Molasses to Rum” lays out. “It really implicates everyone. It doesn’t let anyone off the hook,” said Davis.

Mikel said she gained a new insight into the hypocrisy of the founders. “When you are surrounded by the people who look like you, you have no other way to look at the world,” said Mikel. “You don’t have any outside perspective.”

Changing that perspective, said Mikel, is what makes this production feel so fresh.

Although this diverse revival was conceived before George Floyd’s murder two years ago, the global protests that followed have only heightened the urgency she feels about the play.

“What we encountered in our nation and around the world opened my eyes. People who have been marginalized need to tell this story, more so now than ever,” said Mikel. Praising Paulus and Page, as well as the cast and crew, she said: “We’ve been dedicated to making sure that this story is told with these actors and these bodies on the stage.”

Even when it’s been difficult, she said, the history has been a remarkable resource. “Being able to gather all of that information just gives a richer picture to whoever you’re portraying,” Mikel said.

“1776” is at the Loeb Drama Center through July 24. In the fall, the show will transfer to Broadway’s American Airlines Theatre before embarking on a 16-city national tour in 2023.