The story behind Amartya Sen’s memoir 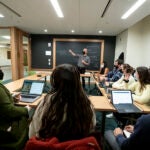 At Div School, centuries-old Aztec language speaks to the present

Nobel laureate, Harvard prof talks about how curiosity and communication shaped him

Renowned economist Amartya Sen was just 19 when he left his home in Kolkata and set sail for the United Kingdom to continue his university education. On the boat, he met members of the Indian women’s hockey team and became friendly with them, despite his initial fears they would share few of his interests or connections. That unexpected encounter in his youth is one of many formative conversations with strangers woven throughout his new memoir, “Home in the World.”

Sen writes about his early life growing up in Dhaka and Santiniketan (in what are now Bangladesh and West Bengal, respectively) during British colonial rule, studying economics as an undergraduate in Kolkata, and moving to the University of Cambridge to pursue further study. Along the way, he met mentors, friends, and intellectual sparring partners who encouraged and challenged his ideas about religion, liberty, and justice. These early experiences were foundational to Sen’s pathbreaking research on social choice theory and poverty, for which he received numerous accolades, including the 1998 Prize in Economic Sciences in Memory of Alfred Nobel.

The Gazette spoke to Sen, who is Thomas W. Lamont University Professor and Professor of Economics and Philosophy, about the challenges of writing a memoir, and the role of curiosity and communication in shaping his life then and now.

GAZETTE:  What made you want to write a memoir?

SEN: If anyone suggested to me when I was in school or in college that I would spend a lot of time writing a memoir, I would have been shocked. But if you start thinking seriously about your life, it can have a certain amount of fascination — at least to you, if not to others. I had some of that surprise, but it also became clear with age that we don’t spend enough time examining what makes us what we are. That odd question did generate some interest in me. Also when we come to a place quite different from any we have known, we are tempted to ask questions that we may not have asked otherwise. As I arrived at Trinity College in Cambridge, I could see it was a very different student atmosphere from Calcutta, where I had been. I had to ask myself: In what ways do the colleges — Presidency in Calcutta and Trinity in Cambridge — differ? It may not be a hugely profound question to ask, but once you ask the question, it’s very difficult to ignore it.

GAZETTE: You write about meeting people and learning from them in many different circumstances. How important was that kind of communication during your college days?

SEN:  I’ve always enjoyed chatting with unfamiliar people. For example, on the boat I took from India to England when I was 19, the Indian women’s hockey team was, interestingly enough, also on board. I had never encountered any group of people like that before. Initially, I didn’t think I would actually end up being friendly with them. But I did, and I also greatly enjoyed chatting with them, and coming to know some of them quite well. We drank a lot of coffee together and had wide-ranging conversations.

In Cambridge, I was happy to mix with many different political groups. They covered the whole political spectrum — from left to right. There were also groups of other kinds, like the self-consciously intellectual society, the Cambridge Apostles. Some of them were very smart — something of which they were clearly not unaware. If you have a society of people like E.M. Forster and Eric Hobsbawm and others like that, I suppose you have a right to think that you’re rather special. I must, however, confess that I did enjoy the weekly gatherings — if only to chat, argue, contradict, and ultimately find a way of understanding what others were trying to say.

GAZETTE: When you reflected on your early travels and education, was there anything you changed your mind about over the years?

SEN: Right from my childhood and certainly through my college days, I was absolutely adamant that religious divisions were a complete waste of time — or worse. I had to work out why I was so dismissive about being a Hindu or a Muslim or a Sikh or Jewish or a Parsi — why isn’t that religious identity important? Well, the fact is that it is important as far as your religious activities are concerned. But they need not be a good way of distinguishing people, and they should not be important in politics, except to the extent that you declare them to be important and then go to war on that self-created illusory importance. As I was growing up in school, a secular India moved quite rapidly into a country divided between Hindus and Muslims and Sikhs, and that was deeply tragic. The communal riots were vicious in the 1940s, and a lot of people died. Others had a miserable time having to move from one home to another. I had to ask again and again why religious divisions in general, and those particularly in politics, persist even though they were such misleading ways of thinking about people.

GAZETTE: What kinds of questions did you ask yourself about your relationship to politics over your lifetime?

SEN: Too many different types of questions to talk about them all. I did ask myself: Why did I take politics seriously? Why did I think in terms of being right wing or left wing? These distinctions often were also ambiguous. Being left wing attracted me, but contrary to some left-wing traditions, I thought liberty was very important. I was very happy to discover that my teacher Piero Sraffa had argued with Antonio Gramsci, the great Marxist thinker, that liberty was indeed very important, even though the Communist Party, not just in Italy, often tended to neglect the subject. This is a subject on which important debates can take place within left-wing circles.

When I was young, issues of equity and inequality absorbed me a lot — they still do. But perhaps I didn’t sufficiently ask the question: “Equality of what?” It’s only later that the idea that there could be great inequalities in different “spaces” — from income and wealth to liberties and freedoms. It’s not just about being rich or poor, being wealthy and devoid of prosperity. I had to ask: How much difference can inequality of liberty and of freedom make? I knew something about it, but it didn’t engage my attention as much as perhaps it should have. “Equality of what?” was clearly a good philosophical question, and it gave me enjoyable ground for arguing with oneself and with others. 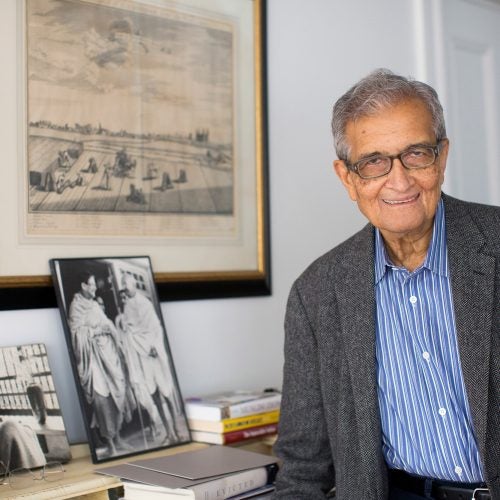 ‘I’ve never done work that I was not interested in. That is a very good reason to go on.’