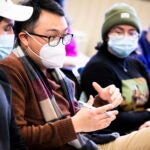 Nina Sayles spent five months of COVID isolation at her parents’ place in New Hampshire. An avid gardener, Sayles took advantage of the time to expand their garden — perhaps, she admits, a bit more than they need, now that she’s back on campus.

After she graduates in May, Sayles wants to expand the garden for the rest of us, too.

Sayles has been exploring the intersection of community health and agriculture in a dual-degree program at the Harvard T.H. Chan School of Public Health and the Graduate School of Design. While the modern industrial food system has worked wonders feeding the world, its flaws have also become apparent: excess resource use, narrowing of varieties, foods — both fresh and processed — selected for shelf life and stability during transport rather than taste and nutrition.

At least partly in reaction to those shortcomings, consumer demand for fresh, locally produced fruits and vegetables has boomed over the last decade, evidenced by the proliferation of farmers markets and community-supported agriculture groups, or CSAs. But Sayles said that there are potentially insurmountable hurdles to growing and distributing enough locally produced agriculture to feed the entire nation.

So she has set her sights on the regional food systems, with the thought that they may be the sweet spot where foods can be grown close enough to reduce transportation and related environmental costs as well as the toll on freshness and nutrition resulting from producing food far away from where it will be consumed. Boosting regional agriculture could allow growers to scale up enough to meet greater area demand, fill the needs of communities with fresher, more nutritious produce and other foods, and even retain some benefits of local agriculture, such as accessibility for consumers who want to learn more about where their food comes from.

“What I want to go on and do has gone more toward focusing on the potential for a regional food system,” Sayles said. “Something a little more robust than a local food system that might also have the benefit of economies of scale, which would improve food access, but also those environmental and educational benefits that you might get from local food.”

Erica Kenney, assistant professor of public health nutrition at the Harvard Chan School and Sayles’ adviser there, said Sayles brings a unique perspective to the problem of nutrition, which has long been a focus of public health officials.

“I don’t think it can be overstated how important it is to have a multidisciplinary perspective like Nina’s on this problem,” Kenney said. “The fields of nutrition and agriculture have traditionally been very siloed and cut off from one another, yet most of the pressing public health nutrition challenges we’re facing today — food insecurity, sustainability, and a food environment that primes us to overeat and increase our risk of diabetes, heart disease, and cancer — are intimately linked with how our agricultural system is set up. Having someone like Nina who can understand both perspectives and bridge that gap between them will be critical for solving some of these problems.”

Sayles’ interest in fresh, locally grown food began early. Her family spent a lot of time hiking and kayaking, and her love of the outdoors led her to become interested in growing things. As a high school junior, she took advantage of a program to spend a semester in Vermont on a working farm, where they grew a large portion of the food students ate.

“Growing up, I just really liked getting my hands dirty,” Sayles said. “I still love growing vegetables. I try to have a garden every summer but, rather than studying horticulture or soil science, to have a much broader, more holistic view of agriculture.”

Today, her interests have moved upstream to how to improve the workings of the food system rather than growing this or that particular crop, but Sayles said the awe and excitement of seeing things grow in those summer gardens hasn’t faded.

“I still will go out and check every day,” she said. “If I’ve just planted a new garden and see one more leaf or two more leaves, I’ll get excited. The science is clear how you go from a seed to a tomato, but that I could plant that seed and then have a tomato I created … it’s almost unreal.”

Sayles will be the latest graduate of a dual master’s in public health/master’s in urban design program. Ann Forsyth, faculty adviser to the GSD side of the program, said there have only been a handful of graduates since its inception in 2016.

“There is this crucial intersection between the places we inhabit and our health and well-being,” Forsyth said. “Both urban planning and public health address that issue from slightly different angles.”

In recent decades, urban planners have begun thinking harder about food and food systems, Forsyth said, including aspects like the protection of agricultural land and the intersection of local food production and transportation systems. Typically, planners focus on food in relation to economic and ecological issues but not in terms of nutrition.

“Thinking about the nutrition side of it is important and somewhat understudied in planning,” Forsyth said.

Forsyth knows Sayles pretty well, being both an adviser and editor of the Journal of the American Planning Association, for which Sayles blogs. She says Sayles is laid-back but also detail-oriented and adept at discovering new opportunities — all of which sort of comes together in a somewhat surprising hobby: fencing saber, one of three traditional weapons used in the sport along with foil and épée.

“The saber is the fastest of the three, so a little more adrenaline,” said Sayles, who is an accomplished competitor. “You have to make a decision and go for it for each point.”

She has been fencing since high school and most lately with the Boston Fencing Club, for which she is member services manager. Sayles said fencing appeals to her because it’s not just about strength alone or talent alone, but presents multiple ways to win — technique, athleticism, and tactics — and the victory can go to whoever creates a winning combination.

“If one isn’t your strong suit, there’s still room to improve,” Sayles said. She’s qualified for the senior national championships in April and said she’d love to make the national team, which competes in the World Cup.

After she graduates, Sayles said she’ll likely stay in New England, where she appreciates how foods shift with the seasons and where cities and rural areas are close to each other, which she said boosts opportunities to find synergies in the food system.

“My work is very place-based, and this is a place that I know, and that I like,” Sayles said. “It has a lot of potential.”