‘Into the Woods,’ together 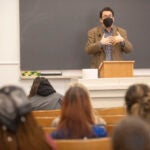 Aviva Ramirez came to Brianna Turner a few months ago with an idea: a collaborative, explicitly multiracial production of the beloved Stephen Sondheim and James Lapine fairy-tale musical “Into the Woods.”

Turner, president of Harvard Black Community and Student Theater (Black C.A.S.T.), had performed in two high school productions of the show and was immediately intrigued by the proposal from Ramirez, a member of the Latinx campus group TEATRO!

“I loved the show, but I had never seen it performed with a cast of entirely people of color,” said Turner, a joint concentrator in social studies and studies of women, gender, and sexuality. “There is so much to love about ‘Into the Woods,’ and we were excited by the idea of taking a really traditional piece of theater and adding our own creative flair and cultural influences from both of our respective groups.”

The new show, directed by juniors Turner and Ramirez, opened at the Loeb Drama Center Wednesday and runs through April 9.

For their production, Ramirez and Turner looked to change up the staging, casting, and structure of the show, which follows a childless baker and his wife as they attempt to counter a family curse that prevents them from having a child. A disparate group of characters pulled from the tales of the Brothers Grimm — including Little Red Riding Hood, Jack and the Beanstalk, Cinderella, Rapunzel, and a witch — cross paths with the couple amid their journeys to improve their own lots.

Since the show premiered on Broadway in 1987, it has received multiple Tony awards and nominations for its original run and revivals. For their production, Ramirez and Turner looked to change up the staging, casting, and structure of the show. They encouraged Black and Latinx participation at every level and cast a group of 16 people of color, most of them Black or Latinx or both. They also led the design process for costumes that incorporated patterns and textures found in the African diaspora and inspired by contemporary Black and Latinx artists and designers.

“We believe that musical theater is a fantastic art medium, and we regret — and hope to change — that it has been very homogenous in the past. That change is one of the main goals of TEATRO! and Black C.A.S.T.,” said Ramirez. “Not only can members of our communities be in these stories, but our identities can actually enrich the narratives that already exist in the text.”

The directors were also struck by how many of the show’s original themes felt particularly relatable to members of the group: fraught relationships between parents and their growing children; the price of getting what you want; and balancing community and self-interest.

“As organizations, TEATRO! and Black C.A.S.T. both have interest in the themes of intergenerational relationships and parent-child relationships, and how those patterns and sometimes trauma gets passed down,” said Ramirez, who concentrates in the history of art and architecture. “These themes are really present in the text of ‘Into the Woods,’ but they take on new meaning when those characters are populated by actors of color.”

First-time Harvard performer Florence Darko ’23 was drawn to the complexities of her character, The Baker’s Wife.

“The Baker’s Wife understands that there’s right and wrong and that some of the choices she makes are not necessarily good, but I think she really embodies what it means to be human,” said the economics concentrator. “That aspect of understanding that life is not perfect is something that really attracted me to that character.”

Ramirez and Turner also saw the production as a way to reintroduce their theater groups to the Harvard community as performances start up again after two years of pandemic-forced hiatus.

“I’m very grateful for this being my first production at Harvard,” said Darko. “I’m working with other actors and other students who look like me, and I don’t feel like the odd one out. That has really allowed me to feel comfortable.”

“Even though we’re prioritizing Latinx and Black actors in this production, I would say the themes are very universal, and the show should be applicable to anybody,” added Turner. “The show humanizes fairy tales, and it’s fun to see the stories you knew from childhood change within the show.”

With the momentum of reopening, Turner and Ramirez are excited to keep making ambitious work and inspire future student theater leaders to do the same — together.

“Black C.A.S.T. has been around for more than 60 years, and now we’re expanding to show that we can be in any sort of piece and performance,” said Turner. “I think there’s a lot we can learn from each other, and there has been a lot of laughter and community-building during this production.”