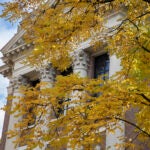 At a meeting of the Faculty of Arts and Sciences on March 1, 2022, the following tribute to the life and service of the late Stephen Williams was spread upon the permanent records of the Faculty.

Stephen Williams, Peabody Professor of American Archaeology and Ethnology, Emeritus, who worked in the Peabody Museum and the Department of Anthropology, was born in Minneapolis, Minnesota, on August 28, 1926, along with his identical twin brother, Philip. An early interest in the lost continent of Atlantis inspired him to pursue archaeology. Williams earned his undergraduate degree at Yale, an M.A. at the University of Michigan, and his Ph.D. at Yale. His first excavation was in his native Minnesota in 1947, followed by work with the great Emil Haury in Arizona.  While at Michigan he began his lifelong interest in the archaeology of the southeastern United States.

Williams’s dissertation, “An Archaeological Study of the Mississippian Culture in Southeast Missouri,” identified some of the earliest pottery associated with the Mississippian tradition, an Indigenous civilization that flourished in the eastern United States in A.D. 900–1500.  In 1954, he came to Harvard on a National Science Foundation postdoctoral fellowship to work with renowned curator Philip Phillips on the archaeology of the Lower Mississippi Valley. He was appointed a lecturer in the Department of Anthropology at Harvard in 1956, earned tenure in 1967, and became the Peabody Professor in 1972. Within the Peabody Museum, he rose from research fellow to curator and finally director for seven very eventful and productive years.

Williams’s youthful interest in pseudo-archaeology led him to teach a course on the topic of “fantastic archaeology” to enable students to distinguish between genuine, professional archaeology and the sensationalist and often spurious tales detailed in popular media about giants, lost continents, and alien visitors. In 1991, the University of Pennsylvania Press published his influential book “Fantastic Archaeology: The Wild Side of North American Prehistory,” a serious work of scholarship that went on to inspire courses on the subject in anthropology departments across the United States.  His list of publications includes dozens of important articles and book chapters on the archaeology of the southeastern U.S., six books (three written or edited with his close collaborator Jeffrey Brain), and ten book reviews of significant contributions to his field.

One of Williams’s signal archaeological contributions came to be known as the Vacant Quarter hypothesis. While touring sites around the confluence of the Mississippi and Ohio rivers in 1978, Williams was struck by an intriguing notion.  He knew that the Mississippian villages of the area, marked by their monumental earthen architecture, had hosted thriving communities of thousands of people between A.D. 800 and 1400, but Williams was also aware that many of these villages had been vacated by about 1450. Plotting these abandonments on a map revealed a vast no-man’s-land that he dubbed the “Vacant Quarter,” covering 50,000 square miles across eight states. This abandonment helped to explain why European settler-colonists scouting the area reported finding derelict villages harboring an “echoing stillness” in the sixteenth and seventeenth centuries.  Although the causes of these abandonments remain the topic of vigorous debate, Williams’s Vacant Quarter hypothesis remains widely accepted by archaeologists today.

Williams was a devoted teacher and primary adviser for over two dozen doctoral dissertations on the archaeology of North America. He chaired numerous important administrative and graduate and undergraduate instructional committees as well as Harvard’s museums’ council and served on the advisory committee for Pre-Columbian Studies at Dumbarton Oaks in Washington, D.C. He was deeply involved in the Southeastern Archaeological Conference for decades, including as the editor of its publications and as a member of its executive committee.

In 1967, Williams was simultaneously appointed Executive Director of Planning in the Faculty of the Peabody Museum and chair of the Department of Anthropology. The next year, he became the museum’s acting director. Wearing departmental and museum hats proved to be an asset for one of his most important intellectual projects:   conducting an exhaustive study of the size and uses of the Peabody’s various spaces for collections’ storage, for exhibitions, for conservation and care of the objects, and for teaching by members of the Department of Anthropology. That study informed his evaluation of the relationship between the department and the Peabody Museum and of what they could become if each were provided with adequate space to do their respective tasks and pursue joint ventures.

The Peabody Museum also housed the anthropology library in a single reading room, packed to the rafters with books. As director, Williams set about planning and fundraising for a new building that would provide desperately needed space for the library and for some of the most valuable ethnographic collections from North America and elsewhere. The initial plans were drawn up in accordance with Williams’s exhaustive study of the museum’s spaces and needs. Sadly that design was never realized, but a substantial gift for the Tozzer Library enabled construction to begin on a reduced version of it, completed in October 1974. He was a tireless fundraiser for other research programs and secured large grants for state-of-the-art preservation and storage of the Peabody’s vast photographic archives. Another grant funded the creation of the Putnam Laboratory for archaeological teaching and research in the Peabody Museum.

In his many leading roles in professional societies and at Harvard, Williams championed the cause of combating the illegal antiquities trade and the looting of archaeological sites that supplied the goods for that trade. His commitment to this cause was tireless and effective: eventually both federal and state laws were enacted to curb such activities in the United States.

Williams married Eunice Ford in January of 1962 and they had two children, Stephen John and Timothy. During his decades at Harvard, he continued his pursuit of sailing on Cape Cod, an interest first developed with his twin brother in Minnesota. Having spent a sabbatical year in Santa Fe, New Mexico, with Eunice, they yielded to its charms and decided to retire there, living the last of their many happy years together in the company of many other archaeologists and friends. He died on June 2, 2017, and is survived by his two sons and four grandchildren.