Damon Galgut wanted to challenge his readers, especially the white ones 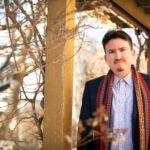 When he won the 2021 Booker Prize in fiction for “The Promise,” about a divided white South African family under apartheid, the South African novelist Damon Galgut looked more surprised than elated.

“It’s taken a long while to get here and now that I have I kind of feel like I shouldn’t be here,” Galgut, who’d been nominated twice before for the award, told the crowd that gathered in London for the ceremony in November.

But fans, critics, and the five judges felt otherwise. In awarding the honor, Maya Jasanoff, Harvard’s Coolidge Professor of History and chair of the 2021 judging panel, explained that the group “arrived at a consensus around a book that is a real master of form and pushes the form in new ways, that has an incredible originality and fluidity of voice, and a book that’s really dense with historical and metaphorical significance.”

During a wide-ranging online conversation on Tuesday, Galgut discussed the book’s narrative structure, tone, style, and historical underpinnings with the literary critic and essayist James Wood, who reviewed “The Promise” in the New Yorker when it was published last April. The exchange was an entry in the Mahindra Humanities Center’s Writers Speak series.

Many readers have praised the novel’s narrative technique, which jumps between the first and third person, character to character. Galgut began with a more traditional structure, but separate script work inspired him to try a more cinematic approach, in which the narration operates like a camera, zooming in and out and moving quickly from one character to another. The choice allowed him to “achieve real closeness to particular characters at certain moments … to speak from inside people at certain times, and then at other moments to pull right back and become a cold, almost inhuman, godlike eye,” Galgut said.

Wood, professor of the practice of literary criticism, called the approach “tremendously exciting.”

But not everyone’s interior thoughts are revealed to the reader. Galgut never gives the Black characters in his novel, including Salome, a crucial figure in the story, their own inner voice. His based his decision on the “brute fact” that “most South Africans do not perceive the inner lives of their fellow Black South Africans to the same extent at all.”

“There is a threshold beyond which the white imagination is reluctant to go,” Galgut continued. “Partly I imagine out of guilt, and partly out of a kind of rough necessity, because if you do imagine the inner life of another person, you imagine their humanity in its fullness, and you have to take account of your part in what is a very uncomfortable power dynamic.”

The author said he left Salome an “unanswered question,” in order to “let that be as bothersome as possible” to readers.

The promise of Galgut’s title refers both to South Africa’s failures and to a property pledge that a white matriarch in the story gives to her family’s Black maid. Land ownership has long been a contentious issue in South Africa. Almost 30 years after apartheid ended, much of the nation’s farmland is still held by whites.

Time is another central theme in the novel. Divided into four sections, each focused around the funeral of a family member, the story spans three decades and jumps forward in time between each death. Galgut said the structure allowed him to highlight the changing political life of the nation and to challenge his audience. “Part of the enjoyment and challenge of reading a book is that you have to stretch your mind,” said Galgut. “I guess what appealed to me is that readers have to fill in those blanks.”