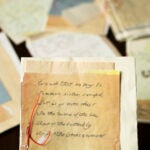 “Opera is a high-intensity sport that needs a team,” he said. “And being on a team is very important to me. There’s nothing like the feeling when everyone can get together and see each other’s work come to life.”

Fittingly for the metaphor, Wenzelberg first realized he wanted to pursue a life in opera while “running, quite literally,” between buildings on Manhattan’s Lincoln Center Plaza as a child chorister and soloist in The Metropolitan Opera Children’s Chorus and a composition student at Juilliard Pre-College for eight years. He loved the hustle and camaraderie fostered among musicians, singers, and stage workers to get a production off the ground.

And now Wenzelberg’s final campus act as a student, his senior thesis, will be a commissioned opera this spring for Lowell House Opera, designed for an ensemble and based on an epic work of literature: James Joyce’s “Ulysses.”

Wenzelberg, a midyear graduate who will participate in the Spring 2022 Commencement exercises, knew opera would be his life. But when he arrived at the College he decided that he also wanted to learn more about the stories and languages behind some of his favorite productions, like “A Midsummer Night’s Dream” and “The Magic Flute.” He was drawn to the liberal arts curriculum and opportunities for cross-department studies.

“I always have felt that my artistic identity matches the profile of opera, because I think an interdisciplinary approach is necessary to make the best art possible, and opera is interdisciplinary,” combining singing, composition, and dramatic performance, said Wenzelberg, who concentrated in English and received language citations in German and Spanish.

“HUM10 [Humanities 10] changed my life, and ‘Ulysses’ was the most mind-bending, terrifying, and fascinating novel,” said Wenzelberg. “It’s famous for being a raw and vivid and comprehensive picture of the life of several humans, as a reimagining of Homer’s ‘Odyssey.’ I also posit that it is a trauma novel, and a story about grief. It has a very bittersweet ending. You also have two versions of the same story told in the same book, which is very conducive to the opera stage. It becomes a duet.”

Wenzelberg wrote the music and libretto for the opera, called “NIGHTTOWN,” over the past two years. He will work with Lowell House Opera on orchestration and choreography before the planned performance run, which, coincidentally, marks the centennial of the publication of the novel. As part of his thesis submission, Wenzelberg also recorded a demo of the complete opera himself.

Doing any one of the three components of the opera would be “a full-time, genius-level project,” said Russ Rymer, a visiting lecturer in creative writing who advised Wenzelberg’s thesis. “It’s astounding that he’s done all of them and started at the beginning with a very literary idea.”

Wenzelberg is “so accomplished musically, but he went out for a creative writing thesis in an English Department, which shows how interested he is in literature and the writing process, not only using literature as a pedestal for good music. He’s at the beginning of a career that is going to go to amazing places,” Rymer added.

Wenzelberg was raised in Tenafly, New Jersey, and started conducting at age 4 for an audience of teddy bears in his room, according to an interview he did with NJ.com. His parents, neither of whom are professional musicians (although his maternal great-grandmother Pauline Covner conducted a chorus at Carnegie Hall in 1950), regularly took him to concerts, operas, and the theater — Wenzelberg recalls being entranced by Mozart’s “Magic Flute” at age 5. Along the way he had training in children’s programs like the one at the Met and Julliard and a star turn in a New York City Opera production of Benjamin Britten’s “The Turn of the Screw” in 2013. That year also saw the performance of a piece of the middle-schooler’s work-in-progress, “The Sleeping Beauty” by the Chelsea Opera.

For “NIGHTTOWN,” Wenzelberg focused on the character of Molly Bloom, the wife of protagonist Leopold Bloom. Molly is an opera singer who has lost a child and been unfaithful to her husband. In “Ulysses,” Joyce focuses on Molly only in the book’s final section (called “Penelope”). In the opera, she takes center stage.

“The goal of the opera is taking an avant-garde episode from the book which serves as a microcosm for the whole story and grounding it, framing it, and reimagining it through the perspective of Molly Bloom” as a woman on her own odyssey of self-discovery, said Wenzelberg. “It offers new and contemporary overtones on an ancient and archetypal story, modulating the ancient Greek nostos [homecoming] story to ask not where, but who, defines home.”

Wenzelberg was also drawn to some of the themes in “Ulysses” that spoke to current issues. In “Ulysses,” multiple female and non-binary people accuse Leopold Bloom of unwanted sexual advances using the phrase “me too,” almost 100 years before the #MeToo movement began. And in a section called “Circe,” Leopold meets Bella Cohen, who runs a brothel and presents as gender-fluid. For “NIGHTTOWN,” Wenzelberg adapted those scenes using contemporary word choices around sexual assault, and wrote Bella Cohen as an explicitly nonbinary character named Bell*, with multiple possible endings depending on the selection of the performer and whose music can be sung in any octave depending on the performer’s voice.

“I think contemporary opera needs to speak to contemporary times,” said Wenzelberg. “This is a way for opera to move in that direction through adjustments in music and the design of the art form.”

Wenzelberg has held music director roles at Harvard College Opera and the Mozart Society Orchestra, assisted with productions at Lowell House Opera, sang in the Harvard University Choir, and helped out anywhere else he could on stage and behind the scenes. He also been a guest conductor with the Boston Pops Orchestra and regularly travels internationally for conducting and performance opportunities.

The COVID-19 pandemic halted most of Wenzelberg’s production plans on and off campus, and he took a semester off from the College. He focused on “NIGHTTOWN,” attended the Gstaad Conducting Academy in Switzerland, and competed in the 2021 Metropolitan Opera National Council Auditions as a countertenor. He mourned the loss of live performance, rehearsals, and collaborations with Harvard friends and other musical peers, but found the themes of “Ulysses” resonating with his own situation in ways he never expected.

The opera is “a testament to a lot of loss, personally and collectively, during COVID. It’s also a love letter to everyone that has been part of my life, especially in the past few years and several months,” he said. “However, it has been the greatest gift as well to be back on campus and knowing that this opera will have a live performance. I’ve tried very fervently to make the most of a meaningful last semester here.”