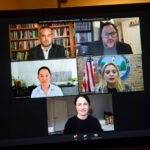 Young people today often are viewed as lazy, immature, and lacking in ambition even though they are not all that different from earlier generations, said Nancy Hill and Alexis Redding of the Harvard Graduate School of Education. In their book “The End of Adolescence: The Lost Art of Delaying Adulthood,” Hill, Charles Bigelow Professor of Education, and Redding, lecturer in education, wrote that young adults today have many of the same insecurities and fears about their futures that their parents and grandparents did at their age. The Gazette spoke to Hill and Redding about the disconnect. This interview has been edited for clarity and length.

GAZETTE: What are the most common misperceptions about today’s youth?

HILL: It seems that every generation thinks poorly of the youth of their day. Misperceptions today include that youth are lazy and self-indulgent, that they only want to work in jobs that are prestigious and pay well, that they live with their parents, and that they are resistant to growing up. We debunked these myths when we discovered a forgotten archive of interviews with college students from the 1940s to the 1970s. Based on these interviews, our research showed that college students from prior generations sound shockingly similar to today’s youth. Today’s 60- and 70-year-old people had the same insecurities and concerns about finding their future when they were 20-something. They had the same seeming resistance to taking responsibility and growing up. This was also true for those coming of age in the 1940s, ’50s, and ’60s. In debunking the myth that today’s youth are somehow more reticent to grow up than prior generations, we were able to demonstrate that coming of age is very similar from one generation to the next and that we understand them better than we imagined.

GAZETTE: What’s behind the view that every generation thinks that kids today are not as good as they were in the “olden days”?

REDDING: What’s important about this narrative is that it goes all the way back to Aristotle. There’s always been a dismissive narrative about “kids these days,” and so much of it stems from our own forgetting about what it’s like to be in this profound period of transition and to be making decisions at a moment when we’re still uncertain about how things are going to work out. When we look back across our lives, we can connect the dots in a way that makes sense because we know the end of the story. But we forget that young people are in the midst of a story where they don’t yet know that ending.

GAZETTE: Your book argues that young adults today and those in previous generations are more similar than different. What similarities struck you the most?

REDDING: There is a dominant narrative about achievement culture today and hypercompetitive college admissions creating a high-stakes moment for youth as they’re transitioning into college settings. That’s true. But I was surprised by the continuity of how much weight there was on the shoulders of young people in the 1970s as well. They felt the pressure of embracing the privilege and opportunity of being in college while thinking about how they would transition into the rest of their lives. We have also been fascinated by how young people describe renegotiating the relationships from home as they move to college and try to stay connected to their roots while discovering themselves. When we think of social media creating a digital tether between home and campus today for folks who move away to college, we assume that something profound has shifted because of that. Yet, we really don’t see a remarkable difference.

HILL: There are two similarities that were surprising to me. One was the loneliness that we hear about today on campus: The difficulty that some people have in finding their friendship group is the same today as it was in the 1970s. One of the students in our sample from the 1970s talked about how he expected to find friends in classrooms, and they sit in the college lecture hall week after week, and they don’t even know the names of the people they’re sitting next to. The loneliness they experienced is very similar to the kind of loneliness students talk about today. The level of anxiety that students experienced in the 1970s was also surprising. We hear a lot today on campus about how anxious students are about finding the right job, getting into the right graduate schools, and whether they are going to find their significant other. I was struck by how similar those feelings of uncertainty and anxiety are in the students’ voices from the 1970s.

GAZETTE: How are today’s college students different from their peers in the 1970s?

HILL: What has changed is that youth are reaching the markers of adulthood later: They’re getting married later, on average, than they were in the 1970s. The age of moving out of the house, the age of first marriage, the age of first child and those sorts of things are later than they were on average in the 1970s. But this isn’t unique to today’s youth. If we go back 100 years or more, to the 1920s or the 1890s, we find that the age of first marriage looks very similar to today. The average age of first marriage for a man in 1890 was 28. There is a drop in the middle of the 20th century, when people graduated from high school and could get a job that paid a living wage, get married, buy a house, and have a family by the time they were 22. What has changed is that it’s harder for youth today to find the kind of job that pays a living wage and has a future — one that makes them feel secure enough to move out of their parents’ house and reach all the markers of adulthood.

REDDING: It’s also important to remember that while these are the traditional sociological markers, we see young people today crafting for themselves what it looks like to build a family of their own. As we’re looking at these markers, not everyone is going to choose to get married or raise children, and that doesn’t make them less of an adult. It’s important for current generations to be aware that there is more agency in defining what adulthood looks like today. That’s a notable difference.

GAZETTE: So what are the benefits of delaying adulthood?

“The people in our book are now in their 60s and 70s and their lives turned out OK; not without bumps and struggles, but they turned out OK. If we could tell every youth that it’s going to turn out OK, how much freedom would that give them to be their authentic selves?”
— Nancy Hill

HILL: They include the ability to expand horizons, to take a step back, and think about the opportunities to craft a life that you want. College is the only place we have right now where young people can somewhat press pause. But even then, they can’t really press pause because there are the pressures to get into the right extracurriculars, decide their major, build their resume, etc. Still, college continues to be the best place for youth to delay adulthood. The question becomes, how do we help those who don’t go to college or can’t go to college? They also should have the benefits of time as they make the transition from adolescence to adulthood. There’s an equity issue because the people who get the benefits of time are already privileged and the people who are pressed into adulthood, who are taking on responsibilities at an early age, are often those who are from lower-income backgrounds or ethnic minority backgrounds.

Part of what we debunked with our research is the notion that development is taking longer today than before and that this is new. There are theories out there that say that “emerging adulthood” is a new developmental stage we need to account for in our theories. It’s not a new developmental stage for two reasons: First, delaying adulthood is something that people have been doing for decades. Second, not everyone gets to experience more time by delaying adulthood. It’s an equity issue, and if we can name it and understand the costs of pressing some people into adulthood and others getting the privilege of time, then we can really deal with it and give everyone the benefits of time and then help them understand what to do with it.

GAZETTE: What advice would you give to parents and adults in general to help their young people in the transition to adulthood?

REDDING: We see this false narrative about generational difference that is creating such a boundary between parents and their children, and teachers and the students whom they teach. Our goal in building this connection is not only to break down that divide, but also to build a bridge that helps us to understand that our shared developmental experience means that we can offer meaningful guidance across generations. We can also have more empathy for young people today by tapping into the fact that we experienced these moments as well. I think we get so stuck in talking about generational divides that we forget not only that we understand kids today, but that we can give them advice that resonates with what they’re going through.

HILL: Today’s youth have as much in common with their grandparents. That’s one thing that I hope readers take away from the book, and that should hopefully open conversations across generations. By knowing these commonalities, we can better support youth today and have a greater empathy for the challenges that they’re facing. The people in our book are now in their 60s and 70s and their lives turned out OK; not without bumps and struggles, but they turned out OK. If we could tell every youth that it’s going to turn out OK, how much freedom would that give them to be their authentic selves?