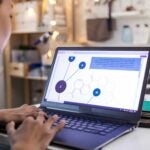 What happens when an authoritarian leader waging a campaign of extrajudicial killings and disappearances in his antidrug war uses the internet to spread misinformation and set public opinion against all critics of his methods, including journalists?

You get what’s been happening in the Philippines over the past five years, as President Rodrigo Duterte’s government has turned social media into an effective tool of information warfare designed to intimidate and silence all opposition and distort and manipulate the public’s understanding of reality, warned investigative journalist Maria Ressa during the annual Salant Lecture on Freedom of the Press on Tuesday evening.

“When you want to rip the heart out of a democracy, you go after the facts. That’s what modern authoritarians do. This is the world we live in,” said Ressa, winner of the 2021 Nobel Peace Prize, referencing a notion from Yale historian Timothy Snyder’s book “On Tyranny.”

Currently a Shorenstein Center Fellow and Hauser Leader at the Center for Public Leadership at Harvard Kennedy School, Ressa has spent her 35 years in journalism covering Southeast Asia. She was a reporter and bureau chief at CNN for two decades before co-founding Rappler, an independent investigative news outlet, in the Philippines, in 2012.

Since 2016, Ressa and her Rappler colleagues have been targeted online for their criticism and exposés of Duterte. Ressa has been sued and arrested multiple times, and Manila court convicted her of cyber libel in June 2020 over a story about a wealthy businessman’s ties to a judge and to the drug world. Ressa neither wrote nor edited the piece, which was published in 2012, before the libel law existed. Facing years in prison, she’s appealing the conviction and says the charges are merely an attempt to weaken Rappler and serve as a warning to other journalists.

Invited to receive her Nobel Peace Prize at a ceremony in Oslo, Norway, on Dec. 10, Ressa still doesn’t know whether the Duterte government will allow her to attend.

“I am putting myself in their power because I will do my job. I have done nothing wrong. All of this is meant to intimidate me, to silence me, or to be afraid and duck out,” she said. “And these types of tactics on social media really do work.”

Duterte’s elaborate network of fake and real Facebook accounts in the Philippines working in coordination to flood enough disinformation and lies to drown out facts and truth and change people’s views and behavior, should serve as a “cautionary tale” for other countries and prompt calls for immediate interventions that must be led by the U.S. tech companies, she told Latanya Sweeney, Daniel Paul Professor of the Practice of Government and Technology at Harvard Kennedy School (HKS).

The strategy has immediate and dangerous ramifications, she said, as many countries, including the Philippines and the U.S., are scheduled to hold elections in 2022.

While digital warfare in the Philippines may be starker, Americans should not feel more protected from its effects, she said.

“You guys heaved a sigh of relief after the election of President Biden. But the underlying systems haven’t changed,” she said, referencing revelations in The Wall Street Journal series “The Facebook Files” that the company abandoned a temporary measure to minimize posts that induced angry engagement right after the 2020 election because it was less profitable.

Fixing this will require the technology industry, journalism, and the public to step up. Since tech “created the problem,” she argued, the first remedies must come from there. Unfortunately, the industry doesn’t seem to believe it has any obligation to serve the public interest, only to deliver returns to shareholders, she said.

One “easy” move is to revise Section 230 of the U.S. Code Title 47, the Communications Decency Act, which shields internet service providers, social media platforms, and anyone who has a website or blog from being held liable for content posted by another.

Another law, the E.U.’s Digital Services Act, which aims to limit the spread of illegal content via artificial-intelligence filtering, is the most effective at addressing algorithmic bias right now, but it raises freedom of speech concerns that make it imperfect, she said. Still, because the algorithms are “prioritizing the spread of lies, hate, anger, and conspiracy theories, let’s cut it off upstream. Content is the byproduct of the toxic sludge.”

Harvard College student Ryan Tierney asked Ressa how she has been able to soldier on with her work amid the barrage of threats and danger she’s endured the last several years. He cited the case of the just-released American journalist Danny Fenster, who was imprisoned by the Myanmar government over his work, as an example of the peril some journalists face.

Ressa said she drew a line in the sand long ago as a student at Princeton about the standards she would live by.

“I knew that if I stopped doing my job — that it wasn’t just about me — and I couldn’t,” she said. “Because if I gave up, then it’s almost like my entire life, my entire career, would be a lie. You need to actually live your values when it matters the most, not when it’s convenient. And the true test of your values is when you stand to lose something.” 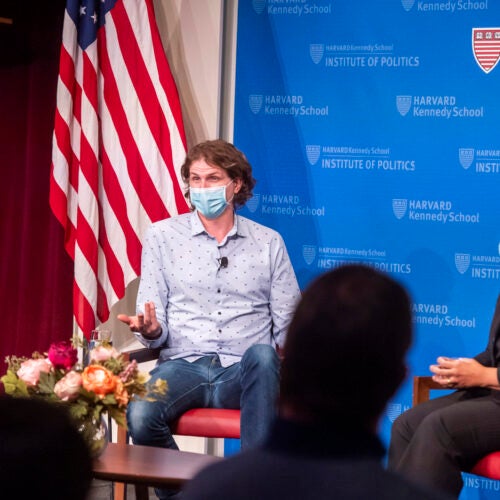 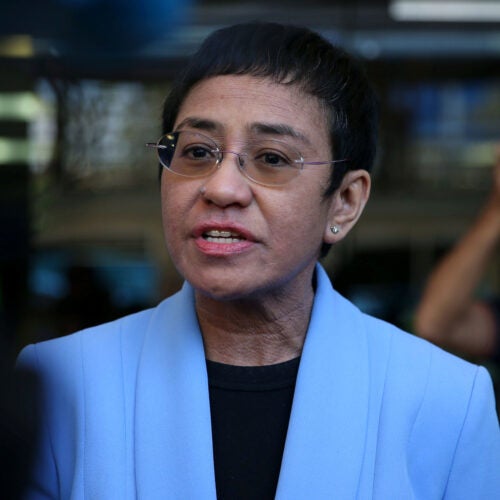 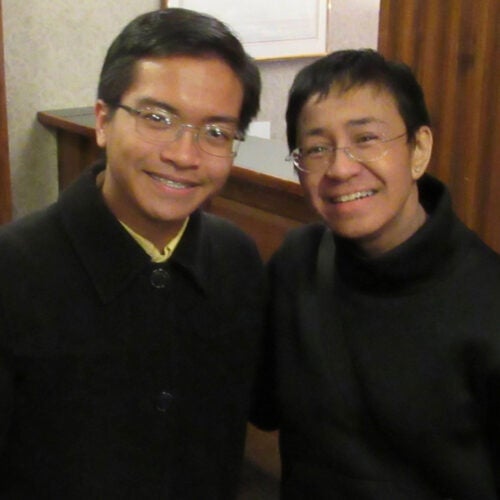 Like Maria Ressa, Jeromel Dela Rosa Lara ’23 emigrated from Philippines as child and is focused on giving voice to the unheard