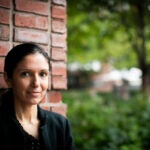 A life’s mission sparked by disbelief over Tuskegee study

Filipino journalist Maria Ressa, a fall 2021 Harvard Kennedy School fellow whose career has cast a critical eye on terrorism, the authoritarian transgressions of the Philippines’ Duterte government, and the role of social media in disseminating disinformation was awarded the 2021 Nobel Peace Prize on Friday.

The Norwegian Nobel Committee awarded the prize, shared with Russian journalist Dmitry Muratov, “for their efforts to safeguard freedom of expression, which is a precondition for democracy and lasting peace.” In the announcement, the panel said the pair represent journalists around the world engaged in the fight to speak freely despite “increasingly adverse conditions” for both democracy and freedom of the press. Muratov is the founder and editor-in-chief of the independent newspaper Novaya Gazeta.

Ressa is CEO of Philippines-based Rappler, a digital media company focused on investigative journalism. She founded the company in 2012, after serving for nearly two decades as CNN’s bureau chief in Manila and Jakarta, Indonesia. The Princeton graduate, born in the Philippines and raised in New Jersey, is a Joan Shorenstein Fellow at the  Shorenstein Center on Media, Politics and Public Policy at the Harvard Kennedy School, and a Hauser Leader at the Center for Public Leadership. She has received numerous awards for her work and, in 2018, was named a Time Person of the Year.

“Maria Ressa fearlessly fights for the free press at a moment when it is imperiled all around the world,” said Shorenstein Center Director Nancy Gibbs, the Edward R. Murrow Professor of the Practice of Press, Politics and Public Policy. “Democracy needs such champions. The Shorenstein Center is proud to have her as part of our community this fall, to learn from her about the forces reshaping the press, and their direct impacts on politics and the health of free societies.”

“We are thrilled that Maria Ressa is bringing her powerful ideas and values to the Kennedy School as a fellow this fall,” said Kennedy School Dean Douglas Elmendorf, the Don K. Price Professor of Public Policy. “Her Nobel Peace Prize is another affirmation of the vital importance of her years of often dangerous work protecting freedom of expression. Our students will greatly benefit from conversations with her about how to defend the core values of a democratic and open society.”

Ressa and Rappler have written about governmental corruption and the extrajudicial killings that are part of President Rodrigo Duterte’s war on drugs. In addition Ressa has reported on the spread of propaganda and disinformation on social media in support of Duterte, warning that the tactic threatens democracy through a “death by a thousand cuts.”

In response to her actions, Duterte has threatened her directly, saying in July 2020, “You will have a dose of your own medicine.” She has been arrested 10 times on charges ranging from tax evasion to “cyber libel,” and is appealing a 2020 conviction on the latter charge.

“Free, independent, and fact-based journalism serves to protect against abuse of power, lies, and war propaganda,” the committee said in its announcement. “The Norwegian Nobel Committee is convinced that freedom of expression and freedom of information help to ensure an informed public. These rights are crucial prerequisites for democracy and protect against war and conflict.”

“The Nobel Committee’s spotlight on journalists acknowledges the increased dangers we face today just to do our jobs,” Ressa said Friday. “In a battle for facts, journalism is activism. Newsrooms require new thinking and a re-evaluation of leadership: How do we turn our upside-down world right-side-up? What values must guide us? I’m looking forward to working with the Center for Public Leadership as a Hauser Fellow and continuing Rappler’s investigations into information operations with the Shorenstein Center.”

Center for Public Leadership Co-Director Hannah Riley Bowles said that the center’s students will be able to learn from Ressa not just leadership, but also tenacity and courage.

“Maria Ressa has worked tirelessly and fearlessly for years to drive social change in her home country of the Philippines and benefit democracy worldwide,” said Bowles, who also co-directs the Women and Public Policy Program and is the Roy E. Larsen Senior Lecturer in Public Policy and Management. “We couldn’t be more grateful for Maria to be with us on campus as a Hauser Leader this fall, role modeling principled public leadership, vision, tenacity, and courage for a generation prepared to carry this work forward.”

“At a time when freedom of speech and truth itself are threatened all over the world, it is inspiring that the Nobel Prize committee has awarded its coveted peace prize to two brave journalists from the Philippines and Russia,” said Professor of Public Leadership David Gergen. “We at the Center for Public Leadership are proud to join the Shorenstein Center this fall as co-hosts for one of them.”

Ressa, who expects to be on campus in November, spoke at Harvard last year about journalism and how the assault on facts has shifted its role to one of advocacy. Nieman Foundation Curator Ann Marie Lipinski introduced her at the 2020 event, sponsored by The Nieman Foundation and the Harvard University Asia Center, and said Ressa has managed her fight “with fearlessness, strength, grace, and wisdom.”

In an interview posted Friday on the Rappler site, Ressa said the fact that the Nobel Prize Committee felt the need to honor two journalists is a statement on the state of the world — and of the Philippines — today, when facts and truth are under assault. She said the fight sometimes makes her feel “like Sisyphus rolling the rock up the hill” but that facts are the foundation for truth and the trust of the public. All are needed to meet today’s globe-spanning challenges.