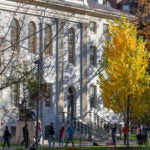 Becoming founders of a future FAS

Ashley Emann’s transition from the military to being a successful Harvard student constituted a kind of boot camp in higher education for someone on a clearly nontraditional path.

Applying as a first-generation college student straight out of active duty, she had an abundance of questions and few resources. How should she upload her application? How could she list any awards, certifications, or skills she got from the military that don’t translate easily to the civilian world? What did the G.I. Bill cover and, just as important, what did it not?

When she finally got to campus, Emann had trouble adjusting from the military world to the academic one. She struggled in classes, getting a 50 on her first chemistry test. Soon, grades in her other courses started slipping.

To make matters worse, finding emotional support was difficult as the 22-year-old first-year, who had spent the last four years working and living in the “real world,” was having trouble connecting with her mostly 18-year-old peers who were fresh out of high school. Not to mention, she was engaged to an active-duty Marine who, at the time, was deployed overseas.

The situation was tough on Emann. But Marine life — where, as a woman, she had been very much in the minority — had somewhat prepared her. She’d learned then about self-reliance and how to find ways to adapt and overcome whatever obstacles came her way, so that’s what she did.

Now, a Harvard College junior, she is set on helping other veterans do it, too.

“There’s going to be a lot more following us,” she said. “If I can make it easier for the next generation, then I want to be that person.”

Emann recently started a newly created role as one of two student coordinators at the Undergraduate Admissions Council specializing in helping those with military backgrounds apply and succeed at Harvard.

“If I can make it easier for the next generation, then I want to be that person.”
— Ashley Emann ’23

The role involves helping guide veterans through the application process. Many of the questions the prospective students ask are ones she’d struggled with, like whether they should be applying as a first-year or as transfer student, and how lessons learned through military experience and training might prove valuable in a higher-education setting.

“Some veterans have previous credit from before they went into the military, and others obtain credit through the education opportunities within the military,” Emann said. “If they are applying for the wrong application, they can miss the deadline for the application they should have been applying to.”

Emann also shares her own experiences, including her struggles, successes, and the things that ultimately helped her adjust.

“A large portion of what we talk about is telling our story, letting others know that there are veterans at Harvard, and that there is a place for us here,” Emann said. “The biggest thing that I address when talking about my experience is that mistakes and, sadly, failures are going to happen.”

Emann tells them how she turned things around with persistence, a robust support system, and the advice of other veterans.

She got help with classes through tutoring and office-hour meetings with her instructors and resources like the Math Question Center, and learned key study strategies and how to address test anxiety. Talking to veterans who were juniors and seniors, she got tips on how to explain and soften the blunt (and sometimes off-putting) communication style that are part of military culture so she could better connect with her classmates. They also showed her how to pace herself at an institution like Harvard.

“My first mistake was taking on too many intense courses too fast, too soon, and too on top of one another. Four years was a long time away from academics — though it didn’t feel like it was a long time until I was in class struggling,” said Emann. “The upperclassmen were great at advising us on planning the next steps to achieve our goals — looking into fellowships, graduate schools, internships, what clubs may interest or benefit us, and they were there when we had VA issues.”

Those included things like getting assistance for medical issues or submitting disability claims.

Emann became part of the Harvard Undergraduate Veterans Organization in 2019. She helped lay the foundation for the organization to grow and is now its director of administration. The group started in 2018 with seven members; Emann joined the next year, along with six others, bringing total membership to 14. Now it is at 49.

She wants others, like her, to have the kind of support she had from the group.

“I guess you could say it gave me something to bounce back against when I had my back to the wall and I was struggling with my classes and wondering if I made the right decision,” she said.

After her rocky first year, she ended up spending much of her pandemic second in North Carolina with her fiancé, back from his tour overseas, and his three young children. Her new challenge became learning how to be a full-time student remotely while helping out with the kids.

“Juggling school, juggling a household, and juggling three kids — two of whom were going to school themselves … remotely — it was intense,” Emann said. But through it, they established a good routine and strong relationships. “The oldest, for instance, would come to me if she had anything she wanted to talk about.”

This year, Emann is living off-campus in Cambridge with her four pets (her fiancé is stationed in California and the children are living with their mother in North Carolina). Along with working with prospective veteran students, she mentors high school students applying to college.

She’s enjoyed seeing the veteran community at Harvard continue to grow and hopes it will get even larger.

For those veterans thinking of applying, she says she has two simple words: “Do it.”

“Put it all on the application,” Emann said. “Tell your story. Tell all the ups and downs. If you don’t tell your story, they won’t know who they’re missing out on.” 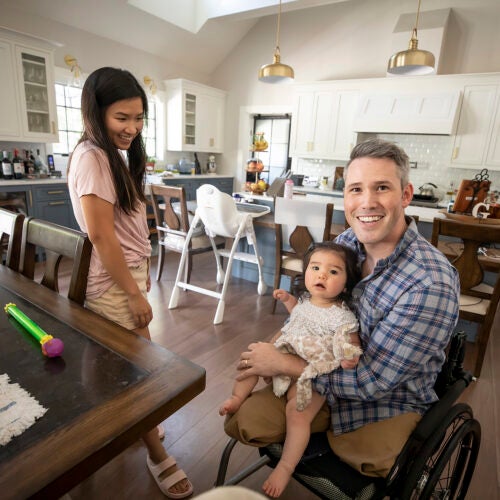 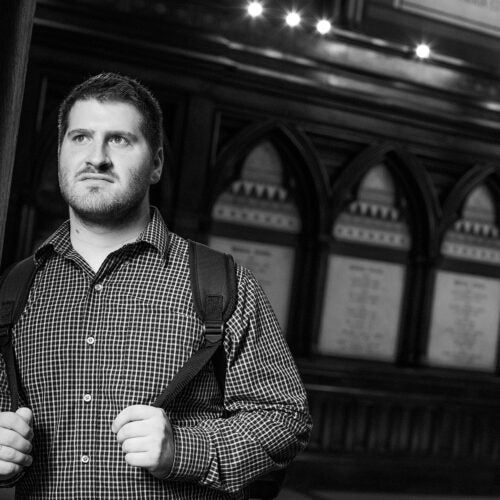 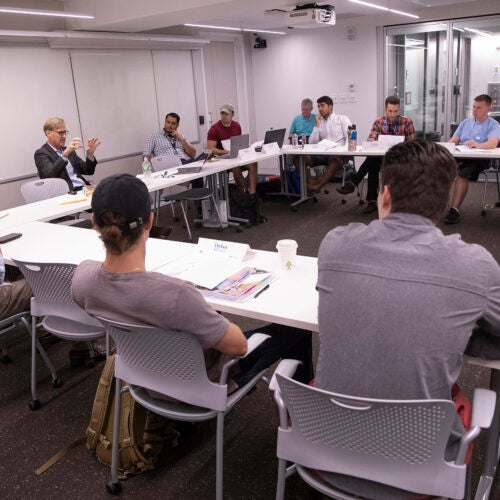