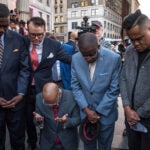 The topic was the Declaration of Independence as 13 students and Harvard lecturer Jonathan Hansen gathered at the Cabot Science Library to probe the document’s driving ideas.

“As you’re reading this, does it seem over the top, does it seem convincing, are you skeptical, do think they made their case too strong?” Hansen wondered of the Founding Fathers who drafted the declaration.

It was the type of question that Hansen, senior lecturer on social studies and faculty associate at the David Rockefeller Center for Latin American Studies, might have asked in any of his classes on the Revolutionary era. But the students seated around him were not undergraduates or even graduates, but instead were current military and veterans, descendants in spirit of those who fought in the nation’s formative war.

Monday’s seminar was part of the Warrior-Scholar Project, an academic boot camp intended to help provide members of the armed forces or those recently discharged with the skills and confidence to transition to top-tier colleges.

This marks the fifth year that Harvard has been a host of the summertime program that is offered at 17 major universities nationwide. Participants are immersed in academic life through intensive courses that combine classroom instruction and readings.

The Warrior-Scholar Project launched at Yale University in 2012 as a one-week liberal arts program, but since 2015 some campuses have also offered a STEM (science, engineering, technology, math) week. Starting in 2017, Harvard’s liberal arts week has been followed by a STEM week at Massachusetts Institute of Technology.

Michael J. Klarman, the Kirkland & Ellis Professor at Harvard Law School, is now in his third year teaching a boot camp seminar. He said the experience has been rewarding.

“The Warrior/Scholars are engaged, well-prepared, intellectually curious, and full of interesting ideas and questions,” he said by email.

Sara Butler, a boot camp participant, also has noticed those qualities in the participants in this year’s program, which runs July 7–21. In discussion periods, “No one really steps aside” or sits quietly in back, observed Butler, who is transitioning out of the Air Force and seeking admission to a four-year college.

“The irony is that you have physically some of the bravest people on the planet — they literally charge machine-gun nests. Yet they are intimidated by the transition to a campus setting.”
— Logan Leslie

During the seminar on the Declaration of Independence, the veterans had no shortage of ideas about the historic wartime document.

Tomas De Oliveira, who served eight years in the Marine Corps and is now a reservist, said he was struck by the almost personal tone of the 27 grievances listed against the British crown, and how the document seemed intended as an appeal to the American public.

“It strikes me as a break-up … a boyfriend or girlfriend just finally calling it quits,” he said.

Brian McCarron, a Coast Guard avionics electrical technician stationed on Cape Cod, said he hopes the boot camp will help him achieve his goal of earning a degree in aerospace engineering.

“For me it’s just soaking it all in, getting a step up on making sure the opportunity I have in the future when I go to college is the best opportunity I can have,” he said.

Logan Leslie ’16, Harvard director of the Warrior-Scholar Project in 2014‒15, said service members are often unaware of their educational opportunities, and can find even the idea of college daunting.

“The irony is that you have physically some of the bravest people on the planet — they literally charge machine-gun nests. Yet they are intimidated by the transition to a campus setting,” said Leslie, who served eight years of active duty in the Army and is currently a National Guardsman while pursuing business and law degrees at Harvard.

“The biggest benefit of the Warrior-Scholar Project is that it shows them that there is really nothing to it, nothing to be intimated about,” he said.

Sidney T. Ellington, executive director of the project, said that veterans who attend college under the G.I. Bill tend to undersell their educational potential, noting that 40 percent of the $12 billion spent annually on G.I. benefits goes to for-profit colleges, many of which lack regional accreditation.

He said one aim of the project is to help participants “re-envision their options for college.” Another is to help them succeed when they do enroll.

In addition to seminars focusing on democracy and citizenship — three led by Harvard instructors — this year’s Harvard program includes study skills workshops, writing classes, assigned readings, and a tour of the Schlesinger Library on the History of Women in America at the Radcliffe Institute for Advanced Study.

Jane Kamensky, the Jonathan Trumbull Professor of American History and Carl and Lily Pforzheimer Foundation Director of the Schlesinger, is in her third year teaching a boot camp seminar. She said she participates in part because she supports the University’s ongoing effort to support the military on campus and include servicemen and -women in its “diverse fabric of students.”

Also inspiring her involvement is that enlisted soldiers often come from “backgrounds of minimal privilege,” said Kamensky. “I want them to come away with the feeling that they deserve citizenship on a campus like ours.”

At Monday’s seminar, Hansen told students his intent was not to reach any conclusions about the Declaration of Independence that day.

“My hope is just to get you hungry to come back tomorrow and come back on Wednesday, and Thursday, and Friday, and make a career of it,” he said. “Come back to college and enjoy it.”