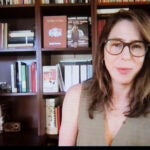 Under the light of a full moon, they gathered in a courtyard of Kirkland House last week for a “legend-trip” to a supposedly haunted or supernatural site.

The destination was Hicks House, Kirkland’s library. Built in 1762, it was home to John Hicks, a participant in the Boston Tea Party who was shot during the Revolutionary War. The students in “Supernatural Storytelling: Ghost-Lore, Occult Legends, and the Politics of the Paranormal” had learned of this history the previous week during a ghost tour with Cambridge Historical Tours.

Instructor Lowell Brower led a discussion about the practices of legend-tripping and ostension (in folklore studies, it means embodying or living out a legend). Then the group entered the library equipped with battery-operated candles, high-quality audio recorders, and an open mind about what forces might reveal themselves.

After some hesitation, Danielle Kelly’s group “started taking ourselves really seriously” and tried to contact Hicks.

“We all held the big candle in the middle of the table, and we started asking yes or no questions to see if he would respond” through the movement of the light, said the junior. “I’m telling you, it moved. I thought it was so cool. I took video of the whole thing.”

The trip was one of several planned for the course, offered through the concentration in Folklore & Mythology. Others included visits to Wadsworth House, Holden Chapel, the site of Harvard Indian College, and a ghost bike outside Harvard Gate, erected in memoriam to Darryl Willis, who died in a road accident in 2020.

Students work on weekly assignments called creePSETS, including collecting a ghost story from another person on campus, documenting local Halloween lore, or writing a letter to a paranormal entity. They can choose a creative, essay, or storytelling approach to their final project.

“I want to give the students the opportunity for experiential learning alongside academic thought,” said Brower, the head tutor, director of undergraduate studies, and a lecturer on Folklore & Mythology who received a doctorate in African and African American Studies from Harvard. “They are deeply familiar with this landscape of campus and Harvard Square, but they get to access this world from a completely different point of view, think through its haunted histories, unearth its skeletons, and resurrect its traditions.”

“I’ve always been interested in how ghosts and monsters can function as cultural touchstones, and this is the oldest college campus in America, so it felt like a natural fit,” said Ellie Powell ’25. “My hopes were really high for this class, and it’s been better than I could have ever hoped. We do amazing readings, and we’ve looked at Harvard hauntings specifically, which was really intriguing to me.”

Powell wasn’t alone. More than 100 people applied to take the course, which was originally restricted to 20 students. Brower expanded the roster to 31 and said the high level of interest among students reflects a fascination with the supernatural itself and how it intersects with other elements of everyday life, including life on campus.

“Many students have had destabilizing, weird, and confusing experiences that haunt them in various ways. Some practice magic arts, and others want to know how supernatural and occult discourses play out in a contemporary world that appears to be deeply committed to scientific rationality,” said Brower.

“It’s been great. All the students in the class are really invested in the class, and I’m not really afraid anymore. I just get excited by ghosts. I want to go and explore other places where they might exist,” said Kumbhat, an English concentrator. “It changes the way you walk through campus. You become a tiny person in a huge place with a long history. You just welcome the ghosts into your life for a little bit.”

“This class allows students to tap into their own folk traditions as legitimate sources,” said Brower. “We want to give credence to supernatural storytelling and supernatural belief and take it seriously as embodied experience, as powerful metaphor, and as deeply meaningful informal human communication.”

“Supernatural Storytelling” also focuses on the interactions between paranormal activity and inflection points in culture and politics. Class readings include texts on religious and patriarchal persecution of women during the Salem witch trials and the use of supernatural myths among white enslavers to exploit and oppress enslaved Black Americans.

After their time in the library, the group reconvened on the lawn behind the Malkin Athletic Center to discuss their experiences and hear student presentations on the week’s readings. Brower noted that sitting together and telling stories is a particularly meaningful experience after more than a year of remote instruction and activities.

“Upper-year students feel immense pressure to pass on Harvard traditions to new students,” after so many months away from campus, said Brower. And Harvard legends and rituals “help foster a sense of belonging.”

“The stories give students a chance to claim vernacular ownership over what can sometimes feel like an intimidating, ungraspable place. And after the silences of the pandemic, we want to make campus loud with stories again,” he said.