In chronicle of beasts, the endings are sometimes bloody 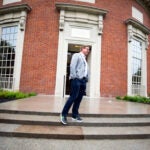 Users give Houghton renovation a thumbs-up

Murderous elephants, gulls vandalizing the Vatican, and macaques that will mug you given the chance: Mary Roach’s new book, “Fuzz,” covers the strange, messy, and sometimes dangerous world of human-wildlife conflict. We connected with Roach, author of six best-sellers, including “Stiff,” ahead of her virtual Harvard Science Book Talk on Tuesday. The interview was edited for clarity and length.

GAZETTE: You get asked a lot about how you get your ideas. I’m curious: How do you know when it’s the right one?

ROACH: Oh, boy. I’m often halfway through the book before I feel confident it’s the right one. I usually go through a period of kind of trying things on for size and often I’ll try on two or three kind of related things and they’re not quite right. The main thing when I’m looking for a new topic is that it it has to let me explore multiple things in person. It’s almost like a documentary filmmaker scouting out places to go and film. I’m really looking to make sure there’s going to be enough variety to keep things interesting. Sometimes I just hit dead ends. I think that I might be heading in one direction but I’m not finding the right variety. Eventually I’ll land on something that seems to tick all the boxes.

GAZETTE: You cover a lot of cases in the new book: man-eating leopards, marauding macaques, run-ins with bears. What surprised you most about the animal-human encounters you researched?

ROACH: I was very surprised to learn that elephants kill 500 people a year in India. I don’t think of elephants as animals that kill anyone. I think of Babar and Dumbo and National Geographic, so the depth of the problem in India came as a complete surprise. That was the biggest surprise I encountered in reporting the book. But it was all new to me, so all of it was, kind of, a surprise.

GAZETTE: For “Fuzz,” you did a lot of traveling. What are some of the experiences that stick out?

There was also the part of India in the middle of Himalaya that I’d never been to. It’s just gorgeous, and they have a unique situation with the leopards there. In other parts of India, leopards don’t stalk people as prey, which is typical of big cats. They’ve got prey that they normally like. Mountain lions here don’t stalk people. Every now and then someone is killed by a mountain lion, but for the most part they’re interested in deer and smaller animals. The leopard situation in the middle of Himalaya is unique in that they do, and I was interested to learn what makes an animal a man-eater, how did that happen, and to see how people deal with it.

GAZETTE: A lot of the people in the book have job titles most people will never have heard of. Can you describe a few of them, and would you want any of their jobs?

ROACH: There were titles like human-elephant-conflict specialist and bear manager, which I quite like. It has that kind of bureaucratic ring to it. Danger-tree-faller-blaster was a good one. I wouldn’t want to be a bear manager because it’s a really difficult job. You’re tasked with protecting both the public and the animals, and that’s a really hard and often emotionally challenging job because sometimes you end up destroying those animals. The people who do this job are often wildlife biologists, people who got into the line of work because they love the outdoors and they love working with wildlife, and they end up having to do this often because people have been careless with leaving garbage unsecured and leaving out things that attract bears and bring bears into a settled human community, which doesn’t typically end well for the bear. That’s a tough job. I wouldn’t want that. Danger-tree-faller-blaster seems like it could be fun. You get to spend time climbing huge, hundreds-of-years-old trees and you get to work with explosives. I don’t think I’d be good. I probably would have fallen from a tree or blown myself up within the first year but, still, it’s a pretty fun job.