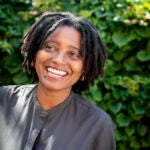 Naming the things you feel

This weekend, thousands of Harvard alumni, affiliates, and guests will come together for Unity Weekend, a three-day virtual conference led by — and in celebration of — Harvard alumni of color.

The first-of-its kind weekend will provide alumni a forum to discuss issues at the intersection of identity, inclusion, and impact. The weekend was conceived and developed by the Harvard Asian American Alumni Alliance, Harvard Black Alumni Society, Harvard Latino Alumni Alliance, and Native American Alumni of Harvard University, in partnership with the Harvard Alumni Association.

“Systemic racism has deep roots in our nation’s history, and over the last several years, we have collectively experienced a heightened awareness around the impact of structural oppression across our communities,” said Harvard Black Alumni Society President Yvonne Osirim ’01, J.D. ’07. Osirim said the alumni volunteer leaders felt they “had a responsibility to promote and advance a culture of inclusion among Harvard alumni.”

Author, producer, and television host Baratunde Thurston ’99 will speak about the intersection of art and democracy in his keynote. Thurston has advised the Obama White House, produced for “The Daily Show,” and is the author of the book “How to Be Black.” He was Emmy-nominated for hosting the Spotify/Mic series “Clarify,” and is executive producer and host of “How to Citizen with Baratunde,” one of Apple’s favorite podcasts of 2020.

Baratunde’s address will follow an opening conversation, “Crashing the Gates: The Fight for Equity in Hollywood and the Arts,” between film producer Franklin Leonard ’00 and novelist Celeste Ng ’02, who use their influence to help other creators find audiences. Cultural commentator and CNN contributor Jeff Yang ’89 will moderate.

Panels and conversations will convene experts who are alumni from across the University to cover a range of topical issues of interest to the alumni groups participating. An environmental justice panel will explore how communities of color are disproportionately affected by the climate crisis and what they can do to solve it. An interactive, collaborative workshop will offer ways communities can use entrepreneurship to drive impact. Alumni in the education field will examine issues of accessibility and mental health faced by schools as in-person learning returns. Finally, a story slam will feature personal narratives from alumni, with music from current students.

“We wanted to show the many ways in which we could work together for the betterment of our communities and Harvard as a whole — and also learn from each other about our differences and how tensions can be addressed collaboratively,” noted Glenda Melinda Aldana Madrid ’07, Harvard Latino Alumni Alliance’s vice president of reunion.

The weekend is also the culmination of a series of Unity Webinars, which addressed topics related to race, ethnicity, diversity, equity, and justice. President Larry Bacow will participate in a Unity Webinar on Oct. 6 in a conversation with Judge Ketanji Jackson ’92, J.D. ’96, who presides over the District of Columbia Circuit Court of Appeals.

“We’ve been able to share our programming with the entire alumni body, and we hope we’ve seeded relationships and built community across difference that will grow and benefit Harvard, our communities, and each other,” said Jeannie Park ’83, president of the Harvard Asian American Alumni Alliance. Park said the virtual collaboration and webinar series stewarded by the four alumni groups made it possible for hundreds of alumni to take part, many of whom might not have been able to make it to campus.

Eighteen months of collaboration and a focus on “shared priorities and passions” led the four alumni groups to develop a “profound trust and respect,” said Emily Van Dyke ’03, M.P.H. ’09, president of Native American Alumni of Harvard University. “We’re hoping [the collaboration] is simply the beginning of a new phase.”

From Flint, Michigan, to Nebraska, to Hollywood — field lessons

Alumni speakers from several of the panels spoke to the Gazette about their experiences — working in fields ranging from the arts to business to public health — to offer insights on some of the issues central to the weekend.

Leonard spends his days looking for the next great movie, and that might mean screenplays that have been overlooked or don’t fit the mold. He is the founder of The Black List, a company known for its annual survey of best unproduced screenplay; films like “Juno,” “Argo,” and “The King’s Speech” have been on past lists. His TED Talk, “How I accidentally changed the way movies get made,” has been viewed nearly 1.7 million times.

For Leonard, the equation is simple: The more voices with different experiences, the better the storytelling and the greater a film’s success. Hollywood has “a choice between recognizing these realities or failing as a business,” he said. Earlier this year, he penned an op-ed for The New York Times breaking down how “Hollywood’s Anti-Black Bias Costs It $10 Billion a Year,” and the Harvard Business School has published a case study on The Black List. “If the film industry doesn’t recognize the need for the ‘culture industry to reflect life,’” he said, “they will cease to be relevant — and I mean that both in cultural and business terms.”’

The other element of success? Diverse teams. “I can’t really conceive of a place where diverse groups wouldn’t need to work together in order to be successful. It’s so endemic to everything that I do and see.” He points to artists and producers like Ava DuVernay, Ryan Coogler, and Barry Jenkins and how they have built diverse teams — and found success doing it.

Now, a new partnership between The Black List and MGM seeks to “discover new voices with unique perspectives from historically underrepresented communities over the next two years,” according to The Black List website.

Author, “Everything I Never Told You” and “Little Fires Everywhere”

For award-winning novelist Ng, the value of diverse groups working together is something “we can see every day — every time we need to solve a problem or face an unfamiliar situation and ask a friend or colleague for their thoughts. It’s a reminder that diversity isn’t just an academic idea; it’s actually an asset for our society.”

Ng is known for more than bestselling novels. A fellow writer, Mira T. Lee, told The New York Times that Ng uses social media to “promote positive change and to highlight other writers, especially women and writers of color.” Ng once posted a call to action about joining a group of writers auctioning character-naming rights for upcoming books to raise funds for Immigrant Families Together, a volunteer group working to reunite migrant families.

To make a difference, listening isn’t enough, she said. “The truth is that many people in marginalized groups explain their experiences and concerns repeatedly, yet those concerns are disregarded or even disputed,” said Ng. “At the same time, those marginalized groups are frequently asked to listen and empathize with groups that enjoy more privilege and more power.”

Ng and Leonard are on the panel “The Fight for Equity in Hollywood and the Arts.”

“The system has structurally locked people into long-term poverty,” leaving marginalized groups to compete, Morgan said. But it doesn’t need to be that way. Diverse groups can access greater power and opportunity if they recognize their problems are shared by other groups, he said. “Functioning in isolation weakens us.”

His company, Ho-Chunk, drives economic development for the Winnebago Tribe of Nebraska, a position that affords him a “platform to promote some of the other racial groups in our area.” He recently penned an op-ed in the Omaha World-Herald about how he grew his company and reinvested in the surrounding communities.

The lessons he has learned could be used by other groups, he said. “We have a phrase in our community: In order to do one thing, you have to do everything.” So, as they sought to diversify the reservation’s economy and create a middle class, Ho-Chunk started its own construction company, built a town from the ground up, bought a bank because they couldn’t get loans, and even sold used cars to avoid the “exploitative lending practices” of other dealerships, Morgan explained.

His work hasn’t gone unnoticed. The Obama White House selected him as a “Champion of Change” and he was named Advocate of the Year by the U.S. Department of Commerce’s Minority Business Development Agency. Morgan will speak on a panel about creating impact in communities of color through entrepreneurship.

CEO of Eliment and Company

Murillo knows what creating change for a community looks like, and what it doesn’t. Before running her own company to support growing businesses and startups, she spent a decade at Google, where she founded the multicultural marketing team, as well as a Latino employee resource group. She also co-founded the Silicon Valley Latinos in Tech Giving Circle. “Impact means that your intention and the output of your actions are in alignment to make things better for the people who need it. They get to decide if the impact is real, if it actually served them.

“As a small business owner, as a woman, as a Latina, I was very aware that the perspective I brought to the table was completely different than that of many around me, but it meant that I could help guide our efforts to reach more diverse communities like mine and others like it,” she said. Murillo add that including diverse voices at the table has to be intentional. This approach isn’t “smart ‘diversity’ strategy — it’s just smart strategy,” she said.

For Unity Weekend, Murillo will emcee a story slam where alumni will share personal stories they’ve written. Spaces where people “can listen and glean from others’ experience” and feel safe to share their own experiences should be more available, more “common,” she said. She hopes hearing others’ stories will help individuals connect to each other. “They’re all human stories. There’s a lot we can all learn and appreciate from that.”

Hall has learned the importance of allies to solve difficult problems, like the water crisis her hometown faces. “Allies all over the world helped us amplify the message our community shouted for more than 18 months,” she said about Flint’s need for clean water after it was found to contain lead in 2014. “Because of our own voices, and the voices of our allies, we are one step closer to having water we can trust.”

After completing her degree in epidemiology, Hall returned to Flint to share what she had learned. In addition to founding a public health company called We Are Healthy and Well, she serves as a mentor for the Flint Public Health Youth Academy, chairs the Health and Environmental Justice Committee for the Flint branch of the NAACP, and is director of wellness and environmental justice for Black Millennials for Flint.

Hall, who describes herself as a “young, Christian, Black, queer woman from Flint,” said her intersecting identities have shaped the spaces she’s been able to enter. “I look for someone who looks like me and make it my responsibility to leave the door open for someone else.” Hall is taking part in the panel “Environmental Justice: The Enduring Impact and Urgent Challenges for Our Communities.”

“When we, especially as members of the Harvard community, commit ourselves to continuously showing up and learning,” she said, “we can leverage our education, privilege, and resources to have an even greater impact on the world around us.”

It’s an idea at the very heart of Unity Weekend.

Register for the event and learn more at the Unity Weekend website.