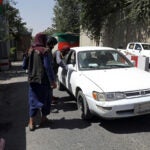 Facing a Tuesday, Aug. 31 deadline to exit Afghanistan, Americans and Europeans are racing to complete their evacuation of thousands of their citizens, along with Afghans who worked alongside them, amid the rising threat of violence from the ruling Taliban, and other political factions such as ISIS-K, the Afghan affiliate of Islamic State, which claimed responsibility for two deadly blasts near the Kabul airport Thursday.

The pullout could have catastrophic consequences, fear those who’ve worked with the many international humanitarian aid organizations, including the United Nations, that have operated in Afghanistan for decades. They anticipate that Afghans who worked for any U.S. and European humanitarian aid efforts will face retribution from the Taliban, despite leaders of the group insisting that will not be the case. And with most foreign aid workers gone, it’s unclear if Afghans will continue to receive badly-needed financial assistance, food, and medical care.

Michael VanRooyen is the Lavine Family Professor of Humanitarian Studies at Harvard T.H. Chan School of Public Health , the J. Stephen Bohan Professor of Emergency Medicine at Harvard Medical School,  and director of the Harvard Humanitarian Initiative, a University-wide academic and research center for humanitarian crises and leadership that supports scholars and non-governmental aid organizations working around the world. VanRooyen, who has worked as an emergency physician with relief groups in over 30 countries affected by war and disaster, explains what the Taliban takeover could mean for Afghanistan. This interview has been edited for clarity and length.

GAZETTE: What’s happening with the international aid organizations that have long operated in Afghanistan?

VanROOYEN:  Most foreign nationals have been evacuated or are in the process of being evacuated, although some leading organizations are still there. There was a call to evacuate staff as of May, so it’s been some months already where there has been a significant drawdown of expatriate presence, and leading up to this there was an additional call to try to get everybody out. I haven’t sensed that there are people who wanted to get out who couldn’t get out, at least from the international staff. (I honestly don’t know the numbers.)

Afghan professionals who have worked with U.S. and other non-governmental organizations to provide aid over the many years here are being actively targeted and hunted. And so, one big issue is the safety of people who have really depended on the U.S. and on the European and Western NGOs to be their operational partner and now they’re going to be left, which is really distressing. Many of the Afghan people who are seeking shelter are not going to be able to get it because most don’t have U.S. or other passports.

GAZETTE: Who are some of the bigger players and have they had to pack up and leave?

VanROOYEN: I know that [the United Nations] World Food Programme is very active there because of food insecurity. Many Afghans are dependent on food aid. The U.N. High Commission for Refugees is very active there. Other organizations, like the U.N. Assistance Mission in Afghanistan, are there, as well; the operational NGOs, the ones that do a lot of the implementing, like International Rescue Committee; I know Doctors Without Borders has presence there. I am assuming that International Medical Corps, which has had a deep history of work in Afghanistan, is still there, as well.

GAZETTE: What happens after the Aug. 31 deadline?

VanROOYEN: After this period of transition, where the Taliban has essentially allowed certain internationals to depart the country under threat but peacefully, the next phase is going to be their consolidation phase. What is it going to look like? The Taliban, in the past, has taken on and provided assistance to populations, at least in certain sectors. But the degree to which they allow access to international agencies, particularly U.N. agencies like HCR or the World Food Programme, [is uncertain] and the results from not allowing any aid will be absolutely devastating, and very quickly.

GAZETTE: What needs have these organizations been addressing?

VanROOYEN: Everything. First, economic aid. That is, the infusion of cash or cash resources or ways that people can be stabilized [financially] so they don’t have to sell their assets and migrate. So, the ability to stabilize populations in terms of their own economic status is a big one.

The next one is the health sector. Things like curative medical facilities, which will crumble, and public health interventions like vaccination programs, for example, or prevention of COVID or managing COVID infections or a variety of other things, will also be severely strained without international NGO and U.N. presence. Because that’s largely how the health system was propped up.

Food security and nutrition: Out of the almost 20 million people who are dependent on aid, a large number of them are food insecure. One out of every two children, so half of the children in the country, suffer from malnutrition. That is precarious. And if that [aid] gets either interrupted or not appropriately managed by major and heavy-lift resources, malnutrition will spiral.

One [challenge] is going to be: How do you house and manage displaced people when there have been [nearly] 400,000 displaced since May? The worry is that, with accelerated displacement, there could be another global refugee crisis.

GAZETTE: Once the U.S. forces are out and the Taliban has complete control, is that the end of Western humanitarian aid in Afghanistan? What happens to those operations?

Afghanistan is so largely dependent on international aid — 70 percent of the economy is dependent on international aid. If that dries up, because of either economic sanctions or a reduction in support or lack of access by the Taliban, it’s a full collapse of the country. [That’s] arguably already happening. The thing that NGOs and U.N. agencies are contending with is being able to get access to vulnerable populations for the delivery of aid and the ability to bring in foreign aid to assist people.

Another challenge is going to be the protection of both civilians and those trying to deliver aid. That’s under threat because of the [Taliban’s stance toward] women and children, and particularly women. The Taliban has been incredibly aggressive in its human rights abuses against certain populations, particularly those who countered them in the past, and also, frankly, programs that support women. 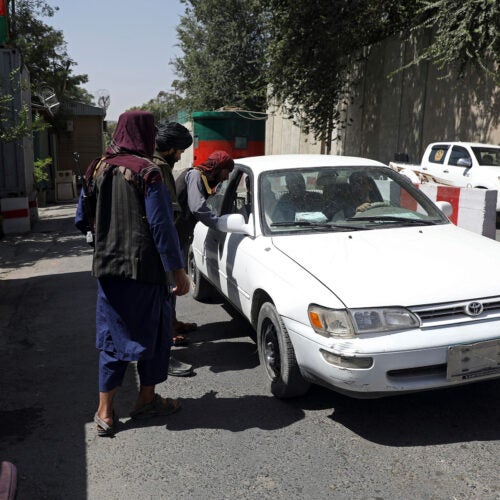 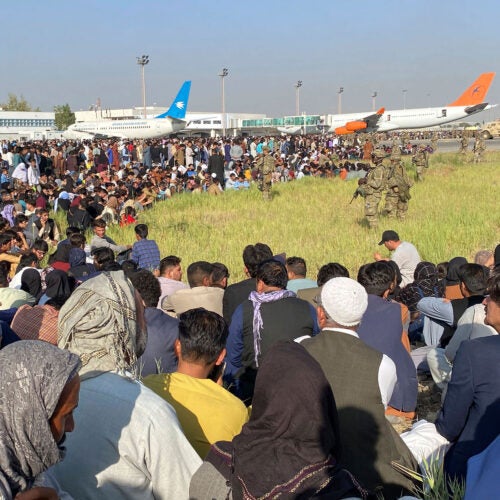 GAZETTE: What else concerns you about what may lie ahead for Afghanistan?

VanROOYEN: The other thing is this issue of human rights. The worry is not only the deprivation of traditional forms of humanitarian aid, such as food, food security, health care, access, housing, management of refugees, all of those things. But the thing that really worries everyone is the possibility of just catastrophic human rights abuses, focusing on women and children and civilians who have supported the aid effort in the past. I think those groups are at huge risk. The thing that may be telling after the 31st, and certainly in the next months, is what happens to those groups? Not only [if] will [aid] be allowed to come in, even under tight control, but also if those populations will be attacked or be protected. And that’s to be determined. That’s a major worry.