How COVID taught America about inequity in education 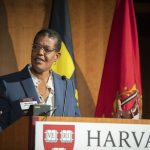 “Unequal” is a multipart series highlighting the work of Harvard faculty, staff, students, alumni, and researchers on issues of race and inequality across the U.S. This part looks at how the pandemic called attention to issues surrounding the racial achievement gap in America.

The pandemic has disrupted education nationwide, turning a spotlight on existing racial and economic disparities, and creating the potential for a lost generation. Even before the outbreak, students in vulnerable communities — particularly predominately Black, Indigenous, and other majority-minority areas — were already facing inequality in everything from resources (ranging from books to counselors) to student-teacher ratios and extracurriculars.

The additional stressors of systemic racism and the trauma induced by poverty and violence, both cited as aggravating health and wellness as at a Weatherhead Institute panel, pose serious obstacles to learning as well. “Before the pandemic, children and families who are marginalized were living under such challenging conditions that it made it difficult for them to get a high-quality education,” said Paul Reville, founder and director of the Education Redesign Lab at the Harvard Graduate School of Education (GSE).

Educators hope that the may triggers a broader conversation about reform and renewed efforts to narrow the longstanding racial achievement gap. They say that research shows virtually all of the nation’s schoolchildren have fallen behind, with students of color having lost the most ground, particularly in math. They also note that the full-time reopening of schools presents opportunities to introduce changes and that some of the lessons from remote learning, particularly in the area of technology, can be put to use to help students catch up from the pandemic as well as to begin to level the playing field.

The disparities laid bare by the COVID-19 outbreak became apparent from the first shutdowns. “The good news, of course, is that many schools were very fast in finding all kinds of ways to try to reach kids,” said Fernando M. Reimers, Ford Foundation Professor of the Practice in International Education and director of GSE’s Global Education Innovation Initiative and International Education Policy Program. He cautioned, however, that “those arrangements don’t begin to compare with what we’re able to do when kids could come to school, and they are particularly deficient at reaching the most vulnerable kids.” In addition, it turned out that many students simply lacked access.

The rate of limited digital access for households was at 42 percent during last spring’s shutdowns, before drifting down to about 31 percent this fall, suggesting that school districts improved their adaptation to remote learning, according to an analysis by the UCLA Center for Neighborhood Knowledge of U.S. Census data. (Indeed, Education Week and other sources reported that school districts around the nation rushed to hand out millions of laptops, tablets, and Chromebooks in the months after going remote.)

The report also makes clear the degree of racial and economic digital inequality. Black and Hispanic households with school-aged children were 1.3 to 1.4 times as likely as white ones to face limited access to computers and the internet, and more than two in five low-income households had only limited access. It’s a problem that could have far-reaching consequences given that young students of color are much more likely to live in remote-only districts.

“We’re beginning to understand that technology is a basic right,” said Reimers. “You cannot participate in society in the 21st century without access to it.” Too many students, he said, “have no connectivity. They have no devices, or they have no home circumstances that provide them support.”

The issues extend beyond the technology. “There is something wonderful in being in contact with other humans, having a human who tells you, ‘It’s great to see you. How are things going at home?’” Reimers said. “I’ve done 35 case studies of innovative practices around the world. They all prioritize social, emotional well-being. Checking in with the kids. Making sure there is a touchpoint every day between a teacher and a student.”

The difference, said Reville, is apparent when comparing students from different economic circumstances. Students whose parents “could afford to hire a tutor … can compensate,” he said. “Those kids are going to do pretty well at keeping up. Whereas, if you’re in a single-parent family and mom is working two or three jobs to put food on the table, she can’t be home. It’s impossible for her to keep up and keep her kids connected.

“COVID just revealed how serious those inequities are,” said GSE Dean Bridget Long, the Saris Professor of Education and Economics. “It has disproportionately hurt low-income students, students with special needs, and school systems that are under-resourced.”

This disruption carries throughout the education process, from elementary school students (some of whom have simply stopped logging on to their online classes) through declining participation in higher education. Community colleges, for example, have “traditionally been a gateway for low-income students” into the professional classes, said Long, whose research focuses on issues of affordability and access. “COVID has just made all of those issues 10 times worse,” she said. “That’s where enrollment has fallen the most.”

In addition to highlighting such disparities, these losses underline a structural issue in public education. Many schools are under-resourced, and the major reason involves sources of school funding. A 2019 study found that predominantly white districts got $23 billion more than their non-white counterparts serving about the same number of students. The discrepancy is because property taxes are the primary source of funding for schools, and white districts tend to be wealthier than those of color.

The problem of resources extends beyond teachers, aides, equipment, and supplies, as schools have been tasked with an increasing number of responsibilities, from the basics of education to feeding and caring for the mental health of both students and their families.

“You think about schools and academics, but what COVID really made clear was that schools do so much more than that,” said Long. A child’s school, she stressed “is social, emotional support. It’s safety. It’s the food system. It is health care.”

This safety net has been shredded just as more students need it. “We have 400,000 deaths and those are disproportionately affecting communities of color,” said Long. “So you can imagine the kids that are in those households. Are they able to come to school and learn when they’re dealing with this trauma?”

The damage is felt by the whole families. In an upcoming paper, focusing on parents of children ages 5 to 7, Cindy H. Liu, director of Harvard Medical School’s Developmental Risk and Cultural Disparities Laboratory, looks at the effects of COVID-related stress on parent’ mental health. This stress — from both health risks and grief — “likely has ramifications for those groups who are disadvantaged, particularly in getting support, as it exacerbates existing disparities in obtaining resources,” she said via email. “The unfortunate reality is that the pandemic is limiting the tangible supports [like childcare] that parents might actually need.”

Educators are overwhelmed as well. “Teachers are doing a phenomenal job connecting with students,” Long said about their performance online. “But they’ve lost the whole system — access to counselors, access to additional staff members and support. They’ve lost access to information. One clue is that the reporting of child abuse going down. It’s not that we think that child abuse is actually going down, but because you don’t have a set of adults watching and being with kids, it’s not being reported.”

The repercussions are chilling. “As we resume in-person education on a normal basis, we’re dealing with enormous gaps,” said Reville. “Some kids will come back with such educational deficits that unless their schools have a very well thought-out and effective program to help them catch up, they will never catch up. They may actually drop out of school. The immediate consequences of learning loss and disengagement are going to be a generation of people who will be less educated.”

There is hope, however. Just as the lockdown forced teachers to improvise, accelerating forms of online learning, so too may the recovery offer options for educational reform.

The solutions, say Reville, “are going to come from our community. This is a civic problem.” He applauded one example, the Somerville, Mass., public library program of outdoor Wi-Fi “pop ups,” which allow 24/7 access either through their own or library Chromebooks. “That’s the kind of imagination we need,” he said.

On a national level, he points to the creation of so-called “Children’s Cabinets.” Already in place in 30 states, these nonpartisan groups bring together leaders at the city, town, and state levels to address children’s needs through schools, libraries, and health centers. A July 2019 “Children’s Cabinet Toolkit” on the Education Redesign Lab site offers guidance for communities looking to form their own, with sample mission statements from Denver, Minneapolis, and Fairfax, Va.

Already the Education Redesign Lab is working on even more wide-reaching approaches. In Tennessee, for example, the Metro Nashville Public Schools has launched an innovative program, designed to provide each student with a personalized education plan. By pairing these students with school “navigators” — including teachers, librarians, and instructional coaches — the program aims to address each student’s particular needs.

“This is a chance to change the system,” said Reville. “By and large, our school systems are organized around a factory model, a one-size-fits-all approach. That wasn’t working very well before, and it’s working less well now.”

“Students have different needs,” agreed Long. “We just have to get a better understanding of what we need to prioritize and where students are” in all aspects of their home and school lives.

Already, educators are discussing possible responses. Long and GSE helped create The Principals’ Network as one forum for sharing ideas, for example. With about 1,000 members, and multiple subgroups to address shared community issues, some viable answers have begun to emerge.

“We are going to need to expand learning time,” said Long. Some school systems, notably Texas’, already have begun discussing extending the school year, she said. In addition, Long, an internationally recognized economist who is a member of the National Academy of Education and the MDRC board, noted that educators are exploring innovative ways to utilize new tools like Zoom, even when classrooms reopen.

“This is an area where technology can help supplement what students are learning, giving them extra time — learning time, even tutoring time,” Long said.

Reimers, who serves on the UNESCO Commission on the Future of Education, has been brainstorming solutions that can be applied both here and abroad. These include urging wealthier countries to forgive loans, so that poorer countries do not have to cut back on basics such as education, and urging all countries to keep education a priority. The commission and its members are also helping to identify good practices and share them — globally.

Innovative uses of existing technology can also reach beyond traditional schooling. Reimers cites the work of a few former students who, working with Harvard Global Education Innovation Initiative, HundrED, the OECD Directorate for Education and Skills, and the World Bank Group Education Global Practice, focused on podcasts to reach poor students in Colombia.

They began airing their math and Spanish lessons via the WhatsApp app, which was widely accessible. “They were so humorous that within a week, everyone was listening,” said Reimers. Soon, radio stations and other platforms began airing the 10-minute lessons, reaching not only children who were not in school, but also their adult relatives.