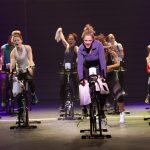 A young person falls into a magical world where the long-accepted rules no longer apply. Luckily our traveler meets a series of characters who guide, and sometimes chide, as the young adventurer traverses the winding path to a new way of being. At its heart, this is the story of “Alice in Wonderland,” Lewis Carroll’s classic 1865 novel, a story that — stripped of its strict gender casting — offered a perfect vehicle for Queer Bodies in Motion’s first artistic endeavor, “Alice in Rainbowland.”

The 30-minute Virtually Oberon production, which will be available as a video stream from the American Repertory Theater June 10‒30, highlights dancers, musicians, and other members of the LGBTQIA creative communities of New York, Massachusetts, and Rhode Island. The show arose from a simpler idea: an inclusive flash mob that would feature dancers free of typical gender roles, explained creator Ana Masacote. “The idea was really to make same-sex partner dancing just a normal, everyday thing in everyday society,” said Masacote.

The pandemic put an end to the idea of such an in-person, immersive performance, and as Masacote and her colleagues began re-envisioning their basic concept, it grew, rather like Carroll’s Alice. “I started collaborating with all the artists and bringing it out into a larger dance spectrum,” explained Masacote, who will discuss the work at the during the ART’s free “Lunch Room” discussion on Tuesday at noon. Soon it had expanded from its Latin dance music base to incorporate more jazz and Afro-Cuban styles, and as the creators discussed the possibilities for a videotaped piece, a larger concept took shape. “It became a conversation on identity,” said Masacote. “We wanted to address transgender issues and gender identity and gender fluidity and expression.”

One of the collaborators, Lilly Rose Valore, a dancer, model, and trans activist from Boston, had previously created a work based on “Alice in Wonderland,” and, with her permission, Masacote crafted a script based on it, with Rose Valore in the role of Alice. With its themes of transformation and self-discovery “Alice in Wonderland” is “a powerful story for the community,” said Masacote. “It has so many hidden meanings about showing up in the world and how you choose to express yourself and becoming who you are along the way.” Ultimately, she said, the work allowed the artists to ask: “What does a Rainbowland for us look like? What does a world of gender-free expression, a world welcoming of identity look like?”

The resulting performance strings together dance and musical performances that evoke Latin dance, African and Afro-Cuban tradition as well as the trans ballroom style familiarized by the HBO show “Pose.” Most of the pieces are solo, a byproduct of pandemic restrictions, but in one duet (recorded once the dancers had been vaccinated), Masacote (as the White Rabbit) and Mori Granot-Sanchez (as Partner) begin to salsa dance, trading roles with “liquid leading,” in which the sinuous dance moves reflect the gender fluidity of the characters. “Salsa is perceived as very gender binary,” said Masacote. Freeing it from these restrictions, she said, “reflects the idea that dance is a mirror to the way we show up in the world, in life.”

That interpretation works for Nadia Issa, who dances the role of Absolem, the hookah-smoking caterpillar whose questions at first mystify but ultimately enlighten Alice. “Absolem is that character who helps her confront what she already knows,” said Issa. A first-year master of theological studies student at Harvard Divinity School, focusing on African and African American Religious Studies, the non-binary, gender-fluid performer interpreted Absolem as an orisha, a deity in Regla de Ocha-Ifá, an African diasporic religion that developed in Cuba. Swirling around in ocean-blue skirts of Yemayá, a mother figure, Absolem is a whirlwind, both stern and loving. Wanting to avoid “telling a trans person how to be,” Issa said, “It’s about how do I nurture Lilly/Alice into owning the craziness and embodying that?”

Issa sports wings, a symbol of growth and metamorphosis that takes up the visual of those voluminous skirts. “The most obvious theme of ‘Alice in Wonderland’ is one of growing up and coming into yourself,” said Issa. “Dance is so powerful in that we live in a very disembodied world,” a detachment accented by the pandemic as well as violence against Black and brown people and the trans community. “When you’re growing up, it’s really easy to separate yourself from your own body, to be scared of your own body.” The message of “Rainbowland” is an antidote, said Issa. “When you turn into yourself, it feels good.”

In another presentation of The Lunch Room, Afro-Latin dance specialist, arts leader, and social activist Ana Masacote and dancer, model, and trans activist Lilly Rose Valore will discuss “Alice in Rainbowland” on Tuesday (June 8) at noon. The Lunch Room is the A.R.T.’s virtual talk show featuring the artists, activists, and civic leaders who are shaping communities. You can register for the free discussion here.