RISE sets its sights on helping some of Cambridge’s neediest 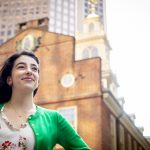 Understanding the mayor’s office from the inside

In Cambridge, one out of every 10 families with children under the age of 18 and one in three woman-headed households with minor children live below the poverty line. Black or African American, Hispanic, or Latinx residents are twice as likely to live under the poverty line, and the pandemic has only exacerbated health and wealth gaps by race and gender.

To help some of its most vulnerable neighbors, Harvard and local philanthropic partners including MIT, the Cambridge Community Foundation, and others provided financial support to the city of Cambridge’s new guaranteed-income pilot initiative, which will provide support to Cambridge residents who need it most. The initiative will offer $500 no-strings-attached monthly payments to 125 eligible single-caretaker households over an 18-month period beginning in August. Participants will be chosen by lottery.

The Cambridge RISE (Recurring Income for Success and Empowerment) project is spearheaded by Mayor Sumbul Siddiqui, Vice Mayor Alanna Mallon, councilor Marc McGovern and a wide consortium of nonprofit partners, including the Cambridge Economic Opportunity Committee, Just-A-Start, and the Cambridge Housing Authority. The payments will be handled/managed through the Family Independence Initiative (FII), the distribution partner for Cambridge RISE.

“Harvard is pleased to help support the city of Cambridge in the RISE initiative and, by extension, the many residents who will benefit from the program,” said Tom Lucey, director of government and community relations. “The University is proud of our ongoing work with the city and its partners to address critical challenges facing our community — in areas ranging from public health to equity to social justice — particularly as we emerge from a unique and complex year.”

Cambridge RISE will address the immediate financial and health needs of the focus population, and while the recipients’ numbers are small compared with the numbers who need help, they will also be offered opportunities for long-term economic empowerment and growth and benefits counseling. The 125 winners will be selected by lottery from entrants on its website. The $500 monthly payments will be made through debit cards.

“We know single-caretaker families in Cambridge are struggling, are well below the Cambridge poverty line, and the impact to single mothers and women of color is even higher,” said Siddiqui. “These families are struggling to make ends meet and are often unable to pay for emergency-related costs.”

The program has also received support from The Boston Foundation and Mayors for a Guaranteed Income, as well as state representatives and donors.

“The emotional and financial stress of continually living paycheck to paycheck perpetuates the generational cycle of poverty,” said Mallon. “By giving single caretakers a little extra breathing room each month, we’re emboldening them to go back to school, take time off work to interview for a higher-paying job, save for a rainy day, and get on a path toward long-term, upward economic mobility.”

To be eligible, households must be headed by a single caretaker with children under the age of 18 and fall below 80 percent of area median income (AMI); the bulk of the participants are expected to earn under 50 percent. Working alongside the Center for Guaranteed Income Research at the University of Pennsylvania, the winners will be randomly selected from a pool of applicants who meet the eligibility requirements.

“As we’ve seen in pilot projects across the country, we anticipate this investment in our pilot group will have significant positive impacts in the overall health and well-being and employment outcomes of these residents,” said Siddiqui.

Cambridge RISE joins a growing number of direct-cash pilot projects across the country, including those in Stockton and Oakland, California; Baltimore; Paterson, New Jersey, and others. Early findings from Stockton’s program are promising, particularly in the areas of employment and mental health. Beyond economic benefits, recipients were found to be less anxious, less depressed, and less fatigued from financial stress.

A direct-payment initiative in Chelsea, Massachusetts, called Chelsea Eats is making payments to 2,000 households each month. A recent study out of the Harvard Kennedy School found that recipients in that program spend most of their allotments at food stores and restaurants.

“The families participating in this program had been experiencing extremely high levels of food insecurity, with more than half reporting that their children were sometimes not eating enough because the families could not afford food,” said Jeffrey Liebman, professor of public policy at the Kennedy School and the director of the Rappaport Institute for Greater Boston. “With 12 percent of Chelsea households receiving assistance, this program demonstrates that direct payments can be delivered at scale.”