Fueled by a love of education and creativity 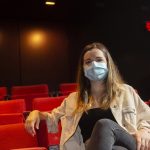 Shahara Jackson was already a leader, so what did grad school teach her? How ‘to go bigger’

The seeds of Shahara Jackson’s zeal for education were planted in her childhood. She grew up in Brooklyn, New York, in a tightknit family, in which the figure of her beloved grandmother Rathenia Jackson loomed large.

Rathenia Jackson was a revered elementary school principal. When she died, hundreds came to pay their respects. Seeing so many people at the funeral made a big impression on Jackson, who was 14 years old. By then, she also worshipped Marva Collins, an educator who opened a school in her home for struggling students in the Chicago public schools in the 1970s. Jackson still remembers watching “The Marva Collins Story,” a 1981 television movie starring legendary actress Cicely Tyson as the Chicago teacher.

“I was enamored of the profession,” said Jackson, who will graduate this month with a doctoral degree in education leadership from the Harvard Graduate School of Education (GSE). “Those two experiences, seeing the impact that my grandmother had on so many people, and the example of Marva Collins, were really powerful influences on me.”

A successful educator on her own, with stints as an elementary and high school teacher, principal of a charter middle/high school in Brooklyn, New York, and founder of a consulting and coaching organization, Jackson came to Harvard hoping to learn how to become a transformational superintendent.

“I learned an in-depth amount about the interconnectedness of systems and structures, which are committed to keeping our educational system at the status quo,” said Jackson. “I also learned that wherever one sits in the educational ecosystem, they can affect change — with strategic planning, effective effort, and support.”

Jackson should know. As a school administrator, her work entailed supporting teachers and staff to allow them to thrive, and as a teacher, she loved seeing young people come alive in the classroom. In 2001, Jackson learned a lesson that has marked her career: Let students lead their own learning. It happened when Jackson asked her fourth graders at P.S. 399K in Brooklyn to write a reflection on the verdict of one of the three Ku Klux Klan members who bombed the 16th Street Baptist Church in Birmingham, Alabama, killing four girls. A student asked whether they could write poems instead, and Jackson was amazed not only by the work they produced but also by the realization that students can direct own their learning.

“I learned then that as a teacher, I can be there to push students along or walk on their side,” said Jackson. “My job is to foster an environment where students can be creative. Creativity breathes life into the world. Being creative gives you license to live your life full of passion, and when that happens no one can put limits to you.”

Jackson’s appreciation for creativity comes from her love for music. A gifted singer, she has found ways to combine music and education, her two passions in life, singing at graduations, school functions, and in her church choir. Once, she took a two-year leave from teaching to tour with a jazz band across Europe, a “dream come true” for Jackson, who idolized Whitney Houston while growing up.

At Harvard, Jackson sang with the Kuumba Singers of Harvard College. During the pandemic, she signed up for voice lessons trying to fulfill an old dream. But she also filled her time with public-service commitments and leadership roles. She was a first-year Dean of Students Office Teaching Fellow, the Specialty Proctor for Public Service and Greenough Proctor at Harvard College, and president of the Harvard Black Graduate Students Alliance (2019‒2020). She was named the Ed.L.D. marshal for her class.

As part of her doctoral program, Jackson did a three-year residency at Boston Public Schools’ Office of the Superintendent, providing executive coaching to leadership team members. Her capstone dissertation explored the ways in which a school district office can develop trust by building bridges between district office leaders and principals to benefit students, families, and the entire school system.

“There is historic mistrust, and it’s systemic,” said Jackson. “It’s between teachers and families, between district school leaders and teachers, and between the community and the district. It’s pervasive.”

Elizabeth City, Ed.D.’07, senior lecturer on education at the Ed School and Jackson’s primary adviser, was impressed at Jackson’s leadership qualities. “She was a very experienced and accomplished educational leader when she came to Harvard,” said City.

“The question is: ‘What value did we add to Shahara?’” said City. “Part of what she was learning how to do here is to take her gifts, talents, and experiences and figure out how can she accelerate educational change for more children and adults? She had worked with leaders in various capacities, and she wanted to know, ‘How do I do that bigger?’ I think she figured out here that you need to go deeper to go bigger.”

The lessons learned are many, said Jackson. The pandemic exposed and deepened inequities in education and affected students’ mental health, as many felt disconnected and isolated from their peers and teachers. The pandemic hit Jackson close to home; seven of her close friends lost loved ones to COVID-19. She sang at three virtual funerals.

While Jackson acknowledges her grief for the losses of the pandemic, including the isolation and the loss of community, she is also grateful for the support of the 25-member cohort that she said lifted her up during the ups and downs of the last three years. When she had a bike accident that left her in a cast and crutches for several months, many of her colleagues rushed to help. “My cohort members, my professors, my adviser,” she said. “I would have not made it without them.”

Jackson displayed grace, poise, and diligence during her time at Harvard, said Tracie Jones, director of diversity, inclusion and belonging at the Ed School. “She’s a leader and doesn’t wait on other people to do the work,” said Jones. “She’s someone who is looking at how she can bring access to marginalized communities, how to get young people to see themselves at Harvard, and how to educate school leaders in thinking outside of the box.”

Jackson herself has learned how to think outside the box during her last year at the Ed School. Amid all the difficulties brought on by the pandemic, or maybe because of them, she reacquainted herself with her old dreams, made time for “cultivating [her] joy,” and found a new purpose. “I’m ready for my what’s next,” she said.

“I’d like to use my voice in multiple ways,” Jackson said. “I’d like to use my singing voice and my speaking voice because the two are not separate. You can learn from music and be inspired to do more and be better. Everyone can leave footprints around the world. I want to leave footprints across the globe. And sometimes, it’s me touching someone with my voice or sometimes touching people with my presence.”