When things just add up 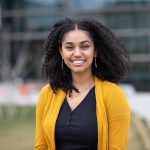 GSAS student Morgan Opie reflects on her journey in mathematics

It’s hard to believe mathematician Morgan Opie was ever uncomfortable with the subject.

After all, the Cape Cod native, who finished her Ph.D. at the Graduate School of Arts and Sciences (GSAS), is an expert in algebraic topology and geometry — areas that deal with the abstract properties of shapes — and will soon start as a postdoctoral researcher at UCLA.

“What got me started in mathematics was that I was behind in the subject, and I wanted to get ahead so that I could potentially graduate early from high school,” said Opie, who had been homeschooled for most of her childhood. “I feel like it was just sort of a slippery slope for me. Each time I found out about another math topic, I wanted to take that class and that would lead me to another class.”

At age 15, she started taking dual-enrollment courses at Cape Cod Community College, beginning with a summer math class. She found that she really enjoyed it, so she stuck with it. She graduated early from high school with an associate’s degree in math and earned a bachelor’s at UMass Amherst and master’s at the University of Cambridge before enrolling at GSAS.

“It was really satisfying to me to understand something that I’d always found confusing,” she said. “That’s still something that keeps me interested in math — you begin with some confusing, abstract concepts and wrestle with them until they make sense.”

There is also an often-overlooked creative aspect to the work, Opie said.

“To solve simple problems, you sometimes need to think about or even invent vast pieces of theory,” Opie said. “Math research is like solving a puzzle, but where you get to construct some of the pieces. It’s a lot of fun, and it’s really beautiful.”

Reflecting on her six years in the Math Department, Opie said it’s been a time of validation and self-discovery.

A big part of that confidence came from tutoring and teaching her peers. Opie was a pedagogy fellow in mathematics at the Derek Bok Center for Teaching and Learning, teaching students linear algebra and designing and teaching several tutorials for undergraduate concentrators.

“It wasn’t until I started teaching that I really realized how much I knew,” Opie said. “When you go to teach a class, you realize there was a time when I didn’t know that this isn’t something that everyone knows about. It’s an opportunity to tell people about math and to convince them that it’s something useful and worth learning about.”

Tutoring and teaching also helped Opie come out of her shell, she said. Through high school and college, she was incredibly introverted. Gaining confidence in her math skills and teaching abilities helped change that. “I’m not super-shy anymore,” she said, laughing.

During her time at Harvard, the 27-year-old also helped organize the monthly Womxn in Math Lunches at Harvard, which provide informal opportunities for women in the community — from first year undergraduates to faculty — to get to know each other.

“The lunches aren’t particularly formal. We just sit down, eat together, and talk. About math, life, teaching, whatever comes up,” Opie said. “Sometimes we talk about ‘Womxn in Math’ issues but usually it’s more about just getting to know each other and building a sense of community.”

At UCLA next year, she will be researching algebraic topology and seeing where the theories take her. When it comes to the impact of her work, Opie said she is playing the numbers game.

“I do the type of math that I do because I find it beautiful, but I don’t really expect my theorems to have an immediate real-world impact,” Opie said. “I think about math as a toolbox, where I’m creating all these tools, including all these theorems. Maybe 10 years from now some physicist or chemist will pick it up and say, ‘This is the tool that I need to solve this problem.’”