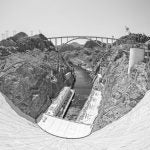 Christiane Taubira and Aminata Touré details efforts in their nations

The murder of George Floyd last May by white police officer Derek Chauvin in Minneapolis triggered a series of protests and a reckoning on race that spread across the nation and renewed discussions about deeply embedded racism in countries around the world.

Two prominent European human-rights activists appeared in a trans-Atlantic Harvard event on Thursday to discuss ways legislation on that continent can and has been used to fight racism. The event also marked both the anniversaries of the Floyd killing and that of the French Parliament’s passage 20 years ago of “Taubira’s Law,” which recognized the Atlantic slave trade and slavery as a crime against humanity.

Christiane Taubira was France’s minister of justice from 2012 to 2016. She introduced the French anti-slavery law as well as legislation permitting same-sex marriage and adoption. Aminata Touré is vice president of the Schleswig-Holstein Parliament in Germany and the first Afro-German vice president of a parliament in that country.

Moderator Mary D. Lewis, Robert Walton Goelet Professor of French History, began the conversation by asking Taubira about the law that bears her name, specifically comments she made at the time of passage that it amounted to a symbolic reparation.

Taubira replied that she now feels that reparation can never be fully possible. “No one on earth, no matter how rich or how powerful, can reform the millions of lost lives,” she said. “So let’s make it clear: The crime itself is not repairable. Sorry is not enough. That’s why this law recognizing slavery as a crime against humanity contains other sections — such as teaching this history at all levels, celebrating officially every year, and [creating] a national committee dealing with history and memory.”

Taubira’s Law, she pointed out, also exists to remind young people and students that certain laws, such as those permitting slavery, can themselves be immoral.

Touré spoke of an effort she’s been spearheading to have the word “race” removed from Article 3 of the German constitution, which prohibits racial discrimination. Lewis pointed out that it may seem contradictory to remove “race” from an equal protection clause, but Touré pointed out that the word has particular connotations in Germany, where it promotes the idea of one bloodline as superior to another.

“The term race is outdated in Germany, and it is racist itself,” she said. “We are not saying that the founding fathers and mothers of our Constitution in 1949 had bad intentions when they wrote it, following what previously happened in the sense of killings and enslavement in Germany. However, they used racist language.”

Her goal, she said, is to prompt a “grown-up” discussion about racism, where Germany comes to terms with its colonialist history. “We are not very well educated in the colonial system we were part of. In Germany we grow up thinking that we didn’t participate. That is not true, and the word ‘race’ is connected to this story we tell ourselves.”

The online event was sponsored by the Minda de Gunzburg Center for European Studies and the Hutchins Center for African and African American Research, with the support of the Cultural Services of the French Embassy.

Responding to an audience question, Touré cited the 1935 Nuremberg Race Laws as an example of the word race being used to justify crimes. That said, she emphasized that her main goal was to change actions, not words. “I deeply believe that language is important, but we really need legislators to act against racism. In Germany we take the easiest point: We say, ‘Changing the constitution should be easy. Let’s do that.’ What we really need is to talk about is institutional racism, laws that are racist, police officers that are racist. If you ask me, we can leave the word in the constitution if we’re tackling all the other things.”

Taubira further argued that race is not a biological fact, but an idea that was invented to justify the crime of slavery. To emphasize this she spontaneously broke into song, choosing a lyric from the late Jamaican singer-songwriter Bob Marley’s “War” that echoed her beliefs: “‘Until/ the philosophy/ which holds one race superior/ and another/ inferior/ is finally/ and permanently/ discredited/ and abandoned,/ everywhere is war.’ Thank you, Bob Marley.”

A few audience members asked about the rise of far-right politics in Europe and the attendant Islamophobia in addition to anti-Black racism. Touré responded that this movement was at first overlooked in Germany, and this was largely responsible for her own entry into politics.

“The moment when I decided was when I saw in Germany that a lot of right-wing parties entered the parliament on different levels. I was deeply scared about it. … This is why I said we need a grown-up conversation because if we do not educate ourselves about it, we will not be able to fight it,” she said.

One audience question for Taubira was submitted several times: whether she would leap into next year’s French presidential election. “That question is always a trap, you know?” she answered. Taubira’s name has been floated in the French press as a potential progressive candidate amid some growing dissatisfaction over the prospect of a rematch between centrist President Emmanuel Macron and far-right leader Marine Le Pen.

Taubira would only say that she hopes to be involved on some level. “I feel some anguish because I care for how young people are going to live in our country with so many injustices, so many crimes and so few prospects. But as of now I can’t say how I will be able to be part of it.”