Pinning down a new future 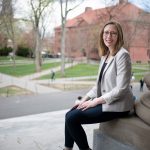 When an injury finished his wrestling career, Cliff Wang had to rework his plans

Cliff Wang had wrestled since he was 6. The sport had taught him countless lessons — about determination, hard work, perseverance through adversity — that echoed through his life off the wrestling mat.

In his sophomore season, while wrestling the country’s eighth-ranked wrestler, it taught him something else: There is a time for everything in life. Despite his continued love of the sport, his time on the mat had ended.

“I always knew there was going to be a future after wrestling,” Wang said. “I knew there would be a day when I didn’t have to think about going to practice, the shoes would be put away, the constant weight-cutting and all the training were going to be done. But it was a pretty tough way to have it all be done.”

Wrestling taught him one last lesson though, one that he would learn through its absence. The lesson was that choices awaited, now that Wang’s focus could stray from becoming an All-America wrestler.

Wang was a biology concentrator at the time of the injury, and intended to attend medical school eventually. But he said he’d always been torn between the one-on-one nature of the help rendered by a physician and the potentially broader impact of work in other fields. During a trip to China to visit family — his parents immigrated to the U.S. before he was born — he experienced air pollution so bad that he couldn’t see the sun or clouds during the day or the moon and stars at night.

“Fortunately, I have a healthy body with no medical conditions and I didn’t experience any physical symptoms,” Wang said. “But I took clean air for granted.”

Wang wound up switching his academic focus from medicine to climate change and sustainable energy. As he was making that transition, his body healed. Though he’ll never wrestle again, within a year he was able to run and participate in other activities.

He also came to terms with himself. An important lesson he learned from wrestling is that progress is not linear, there are always ups and downs. After leaving wrestling, he struggled with his mental health as well as his physical health. He came to grips, he said, with unhealthy habits that stemmed from what he described as “toxic” family dynamics when he was growing up. He had never dealt with their fallout in himself, he said, until he saw that they were harming his relationships on campus.

While Wang was healing, he was also exploring. Wrestling and keeping up with his classes had taken all of his time, but since he now had some breathing room, he looked for a lab to join, eventually joining the lab of Michael Aziz, the Gene and Tracy Sykes Professor of Materials and Energy Technologies. There, he became interested in Aziz’s work on flow batteries, which are based on liquid components, rather than solid. That allows them to be scaled up massively, with potential applications in the electric grid, where storage will need to be a key component as renewables generate more and more of our power. Unlike a conventional grid, which operates by matching power generation to demand, and where a natural gas plant can be rapidly spun up to generate more power when needed, a grid that relies heavily on renewables needs storage to meet increased demand when the power source isn’t operating, such as at night when the sun doesn’t shine on solar panels or on still days when wind turbines aren’t turning.

Tommy George, a postdoctoral fellow in Aziz’s lab who directed Wang’s senior thesis, said Wang persevered through the abrupt changes last spring when the pandemic upended everything. Wang had planned a project that would be impossible with the labs shut down or, later, with access restricted. Instead, he pivoted to a project that entailed mathematical modeling of the electrical conductivity of the membrane that separates a flow battery’s liquid components. The way the battery works is that positive ions flow across the membrane, freeing negative electrons to flow into the wire and produce electricity. The conductivity of the membrane, George said, is a key factor in how well the battery works.

“I got to know him pretty well,” George said. “Overall, he’s the sort of person who lights up a room. He’s a friendly guy who brought great energy to the lab and humor to lab meetings. As his research mentor, I also understand that he’s highly motivated, a researcher who’s focused on producing good results.”

Today, Wang said he’s interested in continuing his work on energy sustainability and is looking ahead to a doctoral program at the University of California, Irvine, possibly in the lab of George’s own undergraduate research advisor.

“It’s a great department, one that’s really growing in prominence in our field of electrochemistry,” George said. “I’m excited for him. I know he’ll do great there.”