Tindal named director of Harvard Museums of Science and Culture 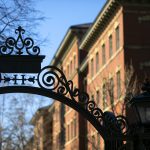 1,968 total accepted to the Class of 2025 as regular-decision letters go out

Brenda Tindal has been named executive director of Harvard Museums of Science and Culture, Claudine Gay, Edgerley Family Dean of the Faculty of Arts and Sciences (FAS), announced today. Tindal will begin her new position May 17.

Gay said that Tindal will lead “with a passion for the work of museums as incubators of courageous inquiry” as the public face of the FAS research museums, which include the Harvard Museum of the Ancient Near East, Peabody Museum of Archaeology and Ethnology, Harvard Museum of Comparative Zoology, Harvard University Herbaria, Museum of Natural History, the Collection of Historical Scientific Instruments, and the Mineralogical and Geological Museum.

“A forward-thinking leader and public historian, she brings to her work a heartfelt belief in the power of museums as profound sites of connection and new learning,” Gay said of Tindal. “Throughout her career she has prioritized meaningful civic dialogue and learning among broad and diverse audiences and has skillfully built the trusted partnerships and authentic community relationships needed to center museums in advancing public knowledge.”

Tindal joins the FAS as an award-winning educator and scholar from the International African American Museum (IAAM) in Charleston, S.C., where she served as founding director of education and engagement and led the launch of the museum’s inaugural education program. Prior to IAAM, she served as director of education at the Detroit Historical Society during the start of its widely acclaimed “Detroit 67: Looking Back to Move Forward” exhibition and community-engagement initiative. She also served as staff historian and senior vice president of research and collections at the Levine Museum of the New South in Charlotte, N.C., where she was the first woman and first African American in that role.

“Museums are not merely cabinets of curiosity; they are well-positioned to serve as hubs for new learning and play a meaningful role in helping their communities and stakeholders grapple with hard truths and nuanced issues.”
— Brenda Tindal

At the Levine, she co-curated the pioneering 2017 project “K(NO)W Justice K(NO)W Peace,” one of the first exhibitions in the country to show community-law enforcement relations in a historical and socio-cultural context.

“As a museum leader, I’ve encountered and had to navigate a number of challenging and sensitive community and institutional matters. Some of the controversies and delicate dilemmas museums face require courageous inquiry, thought partnership, and creative solutions. Museums are not merely cabinets of curiosity; they are well-positioned to serve as hubs for new learning and play a meaningful role in helping their communities and stakeholders grapple with hard truths and nuanced issues,” Tindal said.

At the Levine, Tindal also served on the curatorial team that developed the exhibition “Courage: The Carolina Story that Changed America,” which explored the region’s role in the landmark school desegregation case, Brown v. Board of Education (1954), and was awarded the National Medal for Museum Service, the nation’s highest honor given to museums and libraries, in 2005. Last year she received the Museum Leadership Award from the Southeastern Museum Association (SEMC) for service leadership and innovative practice.

Tindal has worked extensively in the diversity, equity, inclusion, and accessibility space as well as that of race and slavery and institutional reconciliation. She served as consultant for and participated in The Atlantic’s third annual summit, “Race + Justice: Charlotte,” in 2017. At Princeton (2011‒2012), her research as an Institute of Museum and Library Services Fellow and associate archivist laid the groundwork for the Princeton & Slavery Project, and she co-curated “‘Your True Friend and Enemy’: Princeton & the Civil War.” She has taught numerous courses and workshops, including the history of American slavery and emancipation to civil rights in the national imagination, and led training on best practices for engaging descendant communities in the interpretation of slavery at museums and historic sites.

“One of my sweets spots as a museum practitioner is working with undergraduate students and faculty. Having taught at the university level, I’ve always incorporated museums into my instructional practice. I believe museums are essential parts of the learning ecosystem, and the opportunity to be back on a college campus and leverage Harvard’s extensive collections — I’m just thrilled at all of the possibilities,” she said. “There are so many unique opportunities to engage with the museums and deepen connections. I’m honored to join this community of scholars and museum practitioners, and I look forward to building upon HMSC’s interdisciplinary prowess and its robust, public-facing enterprise.”