Bhargava is Class of 1996’s pick for chief marshal 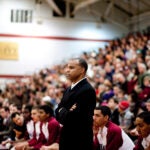 Lawyer has fought for civil rights of underserved and marginalized

The Harvard Alumni Association (HAA) has announced that Anurima Bhargava ’96 will serve as this year’s chief marshal, following a tradition that goes back more than 120 years.

“What an honor and gift to be chosen to reflect the magic and light that emanates from the mighty Class of 1996,” said Bhargava, the director and president of Anthem of Us, a strategic advisory firm that helps institutions and communities center equity and belonging in what they do.

Elected by her classmates, Bhargava will play a number of ceremonial roles to help her class celebrate their 25th reunion. She described her classmates as “lifelong” companions who strengthen each other with spirit and wisdom, and she offered words of praise to the Class of 2021, soon to join the alumni ranks. “You have persevered with honor,” she said. “We can’t wait to witness what will grow from the seeds you have planted, and how you will enrich the soil — and together begin to fill the cracks and divides — for all of us.”

“Anurima Bhargava is an uncompromising and tireless advocate for so many of the students in our country who need a fighter on their side,” said HAA President John West, M.B.A. ’95. “She has turned her vision for equity and opportunity for all into a life committed to service to those in need and those who want a better life for themselves. We welcome her to join the long line of alumni like her who have made a difference.”

Throughout her distinguished career Bhargava has helped marginalized and underserved groups seek justice and equity as well as access opportunity. As a lawyer, much of this work has focused on fighting on behalf of students’ civil rights (including undocumented students) and helping survivors of sexual and racial violence.

For much of the Obama presidency, she was chief of the Educational Opportunities Section in the U.S. Department of Justice’s Civil Rights Division, leading federal enforcement of civil rights laws in schools and institutions of higher education. Bhargava also served on the White House Task Force to Prevent Campus Sexual Assault as well as other national advisory councils.

Prior to working in the Justice Department, Bhargava was a member of — and then led — the education practice at the NAACP Legal Defense and Educational Fund. Her team litigated educational equity and justice cases in front of the U.S. Supreme Court.

In December 2018, Speaker of the House Nancy Pelosi appointed Bhargava to the U.S. Commission on International Religious Freedom, where she now serves as vice chair.

In her latest role, at Anthem of Us, she advises foundations, media, and arts, and civil and human rights organizations to address harassment and discrimination and promote social justice and make policy and practice recommendations.

Bhargava came to Harvard from a predominantly Black public school on the south side of Chicago, where she found her desire to work on law, civil rights, and education.

As a member of the Student Advisory Committee at the Kennedy School’s Institute of Politics, Bhargava began to see “that civil rights and justice were situated at the very heart of democracy and community, and politics generally.”

“I spent much of my time [at Harvard], as I do now, trying to build and cultivate spaces where people can feel like they belong and are valued — from daylong events like Cultural Rhythms to student protests to lifelong associations with the Institute of Politics, Philips Brooks House, and the South Asian Association.”

Bhargava has kept close ties to the University. Last February, she addressed students and alumni on campus as the keynote speaker for the annual Public Interested Conference, coordinated by the Phillips Brooks House Center for Public Service & Engaged Scholarship. She has also served as co-chair for the National Advisory Board for Public Service at Harvard College, was a senior fellow at the Carr Center for Human Rights at the Harvard Kennedy School, and was a fellow at the Institute of Politics.

Through her service to Harvard she hopes she can show students “that service takes on many forms, including telling their story or giving solidarity and voice to the silences,” to help them “build or find a lifelong community grounded in purpose,” to engage across difference, and to give brown and Black students especially “a space to share their stories and to find community.”