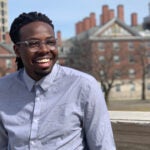 Recognized for their service to the University

First awarded in 1981, the Harvard Medal recognizes extraordinary service to the University in a variety of areas, such as teaching, fundraising, leadership, and innovation. Alumni, former faculty and staff, and members of certain organizations affiliated with the University are examples of individuals who may be eligible for consideration. Traditionally awarded at Commencement, the HAA has made the decision to defer the presentation of the 2020 Harvard Medals until a later date when it is safe to bring people together.

Having served Harvard with distinction for over five decades, Evans will retire as senior admissions officer this summer. Known for his effective communication and humor, Evans has acted as a mentor, advocate, and friend for Harvard students since he began his career on campus.

Evans’ tireless recruitment efforts have reinforced Harvard’s mission of excellence and helped to create a more inclusive and diverse College. Participating in the selection of 50 Classes, Evans has recruited from California to Connecticut, ensuring that students from all backgrounds gained the same chance at higher education.

Raised in Phillips County, Arkansas, Evans earned degrees in electrical engineering from Tennessee State University and Princeton University. While working in Huntsville, Ala., on the Saturn-Apollo project in the late 1960s, Evans began recruiting African American high school students for admittance into some of the nation’s top universities. The media attention his work garnered led Harvard College Admissions to offer him a job in 1970.

Evans has served as an adviser to the Harvard Foundation for Intercultural and Race Relations since its inception in 1981. At the Harvard Alumni Association Black Alumni Weekend in 2003, the David L. Evans Scholarship Fund was announced — its original $250,000 target soared to over $1 million within three years. In 2016, referencing Evans as “the best of Harvard,” the Hutchins Center for African & African American Research awarded him the W.E.B. Du Bois Medal.

Fawaz has been unwavering in her dedication to Harvard. As a member of the Board of Overseers from 1996 to 2012 — including a term as president — she demonstrated an ability to build consensus, serving on its executive committee, chairing the social sciences committee, and leading the subcommittee on visitation. A former Carnegie Scholar, Fawaz was also a member of visiting committees at the College, the Radcliffe Institute for Advanced Study, the Department of Near Eastern Languages and Civilizations, and the Center for Middle Eastern Studies.

From 2009 to 2016, Fawaz was an Overseer member of the Harvard Alumni Association Committee to Nominate Overseers and Elected Directors, chairing the committee in 2016. In 2014, the Harvard Arab Alumni Association presented her with a Lifetime Achievement Award, which recognizes alumni who have made “distinctive achievements in promoting cultural, scientific, social, economic, or political development in the Arab region.”

Born in Sudan to Greek-Orthodox Lebanese parents and raised in Lebanon, Fawaz studied history at the American University of Beirut. She continued her studies at Harvard, receiving an A.M. in 1972 and a Ph.D. in 1979, and joined the Tufts University faculty. In 1994, she became chair of the history department, and from 1996 to 2001, she was the dean of arts and humanities and associate dean of faculty. Fawaz is now the Issam M. Fares Professor of Lebanese and Eastern Mediterranean Studies at Tufts. In 2012, she was named a Chevalier in the French National Order of the Legion of Honour.

O’Donnell has been referred to as a “Harvard treasure” and one if its most inspiring volunteers. His Harvard tenure includes service as a member of the Harvard Corporation and the Board of Overseers, where he served on and chaired numerous committees, and as elected director of the HAA Board of Directors.

When the Harvard Campaign was launched in 2013, O’Donnell was tapped to co-chair what would become the largest capital campaign in the history of American higher education. O’Donnell has also demonstrated his commitment to the University in his role on the Harvard College Fund Executive Committee and as honorary co-chair of the Harvard Graduate School of Education campaign. In addition, O’Donnell has served on the Allston Work Team and chaired many College and Harvard Business School (HBS) reunions.

For over three decades, O’Donnell has also dedicated his philanthropic efforts to cystic fibrosis research, establishing the Joey Fund in 1986 after losing his own son, Joey, to the disease.

Growing up in Everett, Mass., O’Donnell enrolled in Harvard College in 1963 on a full scholarship and excelled in football and baseball. He would later go on to endow the baseball coach position and fund what is now known as O’Donnell Field.

Upon earning his M.B.A. in 1971, O’Donnell joined HBS’s administration as associate dean of students before establishing a food service management company for sports and entertainment venues. O’Donnell now serves as chair of a nationwide leader in the food service industry, while continuing to serve Harvard in numerous ways.