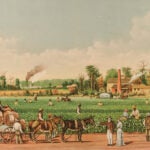 Political experts agree that Iran, which is at odds with Israel and Arab allies of the U.S., is perhaps the greatest threat to stability in the Mideast, and the heat was turned up when former President Donald Trump withdrew from the international Iran nuclear containment deal in 2018.

On Feb.18 President Biden, along with European leaders, offered to restart talks with Tehran to revive the pact. But Iranian leaders had set Feb. 23 as the day on which to sharply limit international inspections amid tightening economic sanctions. Seeking to defuse the situation, International Atomic Energy Agency (IAEA) Director General Rafael Grossi went to Iran and reached an agreement on access on Feb. 21, two days before the deadline. This also opened the door for continued talks with the West on reviving the 2015 nuclear pact.

In a Belfer Center-sponsored Zoom event on Wednesday, Grossi discussed his recent trip with David Sanger, a Kennedy School lecturer and national security correspondent for The New York Times. Grossi, who took over as IAEA director general in December 2019, spoke about his negotiations with Iranian leaders, along with the extra burdens placed on his agency by the dangers of the pandemic.

“All of a sudden the world collapses.” Grossi said about the travel restrictions brought by the COVID-19 outbreak. “You cannot fly, you cannot send out your inspectors, and you don’t know what is going to happen, especially when you have hot potatoes like Iran.”

Yet he said that ending inspections was too great a gamble. “I had an important decision to make, which is, should we stop? Other international inspectorates did just that. But the first message I had was that we are not going to stop for a single minute. We are going to be present everywhere, knowing that continuity of knowledge in terms of nonproliferation is essential. That was easier said than done, because countries were closing down, and border control became impenetrable. I had to do a lot of convincing.”

Talk focused on the Iran trip, which took place against political battles over the nuclear deal, both in Congress, where some on both sides of the aisle question the effectiveness of the agreement, and among U.S. allies in the region, who fear Iran’s emergence as a nuclear power. The deal, instituted under then-President Barack Obama in 2015, placed verifiable restrictions on Tehran’s nuclear program in exchange for relief from economic sanctions by Western powers.

On the same day Grossi spoke at Harvard, Wendy Sherman, the former director of the Kennedy School’s Center for Public Leadership and a current Biden State Department pick, was grilled on Capitol Hill over her role as chief negotiator for the deal.

Grossi has expressed concerns about the potential of Iran’s nuclear escalation. Sanger cited Grossi’s recent statement that we are on the way to a confrontation, if not a full-blown calamity, if Iran’s nuclear program is not curtailed, and Grossi outlined some of the delicate negotiation that went on during the trip.

“All of a sudden the world collapses. You cannot fly, you cannot send out your inspectors, and you don’t know what is going to happen, especially when you have hot potatoes like Iran.”
— Rafael Grossi, general director of the International Atomic Energy Agency

As he explained, in December Iran’s mullahs called for new production of nuclear reactors, centrifuges, and uranium. Grossi said Iran chose Feb. 23 as the date to end its cooperation and begin new production. “I felt that was a strategic, fatal date. Everyone was decrying it, but nobody was doing anything about it,” Grossi said. “My concern, which I expressed to the Iranians and the rest of the world, is that if we didn’t do anything, we would enter a black hole in many of these areas — what they’re doing in terms of fabrication of nuclear material.”

While there was no definitive resolution, Grossi left Iran with an agreement that he would return after three months, during which time the IAEA would be able to monitor Iran’s activities on an acceptable, but more limited level than before. 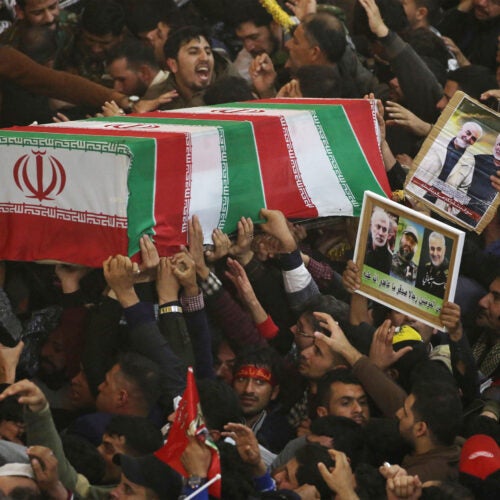 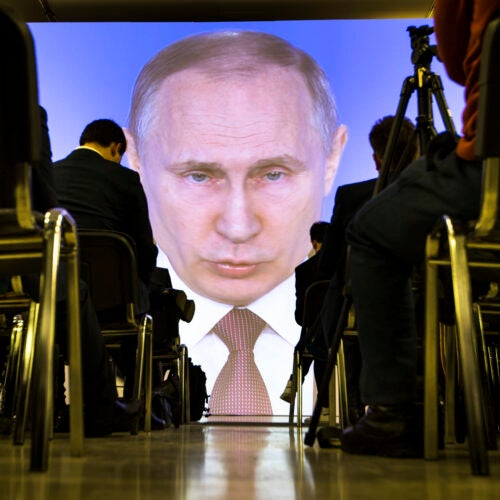 In a related concern, Sanger noted that newly mined nuclear material was found at three different sites in Iran, and he asked what the Iranians were telling the IAEA. “They tell us very little, and that is the problem,” Grossi said. “This is not my first crisis, though I hate to use that word. They argue that some of the things happening there are old ones from some time ago, and they have been giving technical explanations that I found are not credible.” This too will be part of his ongoing negotiations with Tehran. When asked what sort of proposal the IAEA was making Grossi responded, “Let’s talk. That is the proposal.”

Taking the first attendee question, Kennedy School Professor Matthew Bunn returned to the issue of nuclear safety, specifically the effects of the Fukushima disaster of 2011. He asked what steps the IAEA has taken since that incident and what still needs to be done.

Grossi replied that the biggest systematic changes happened after the Chernobyl disaster in 1986, which prompted international collaboration on nuclear safety. Fukushima, he said, was a warning against complacency, prompting new stress tests and reviews of safety standards. “Safety is a process, like taking your morning shower. You do it every day, and you cannot stop. We are always safe, and we are never safe — it is a constant process and all the more so when you have new technologies.”