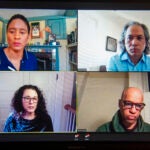 In today’s online world, so-called “magic” is easy. Technological tricks can make anything disappear or transform with a few clicks of the mouse. But when a small band of magicians present “The Conjurors’ Club” with the American Repertory Theater (A.R.T.), they will be sticking to the basics, keeping their online presentation as intimate — and as real — as possible.

This intimacy, say the conjurors behind “The Conjurors’ Club,” which begins March 12, is fundamental to what they do. “Without an audience, magic cannot happen. It’s just a person alone in a room doing fancy choreography,” said performer and magician Geoff Kanick, one of the show’s two co-creators, during a Zoom interview.

Originally presented as an in-person show in New York in 2017, “The Conjurors’ Club” was conceived as a melding of magic and immersive theater. “We wanted to combine those worlds and have a place where you can see magic from 360 degrees,” Vinny DePonto, the show’s other co-creator and a mentalist (or mind reader), explained from his home library. The result was a site-specific entertainment where magicians performed in elevators and even underneath the stage. The point, DePonto said, was “access to magicians that you don’t typically get in a perfectly constructed proscenium,” making the magic feel fresh and unexpected.

Adapting that kind of access for an online performance took some rejiggering. (“I had to figure out how to read minds through a screen,” said DePonto.) It also fit well with the A.R.T.’s ongoing efforts to reach — and even build — audiences in this socially isolated time, such as the ongoing “Behind the Scenes” series, which continues on March 16 with “The Weeping Camel,” the weekly Lunch Room talks, the new series A.R.T. Travels, and ongoing streaming performances through Virtually Oberon, including “Hype Man” beginning April 8.

“A.R.T. has embraced this year of disruption as an opportunity for digital experimentation, innovation, and learning about how we can continue to be creative, collaborate with artists, and engage our audiences,” said Diane Paulus, the A.R.T.’s Terrie and Bradley Bloom Artistic Director. “Digital experiences will never replace in-person theater, but I strongly believe they are not going away. The digital corollary to our in-person theater work is a vital opportunity to reach new audiences around the world, and, most significantly, to provide greater access to theater.”

Key to “The Conjurors’ Club,” say its creators, is that the show, though online, happens in real time. During each performance the audience will witness live magic, performed by magicians in different virtual rooms — the online equivalent of that elevator or the space beneath the stage. Seated before a home screen, the audience will watch, and participate in, each performer’s act, viewing the same card tricks and sleight-of-hand they would see at an in-person theater. As the night progresses, the audience will move onto another online “room” and another performer. “Every night you’ll experience three different magicians,” explained Kanick. “It’s like speed dating, so you get a chance to see that there are many flavors of magic.”

To best replicate that feeling of a “real” in-person show, each magician will work in front of a single camera. That fixed point of view, explain the conjurors, best approximates the experience of being in the audience of a live magic show. “We wanted to make this the most analog digital experience possible,” said Kanick. “We don’t use any camera tricks. It is as if you were sitting across the table from these magicians.”

“Magic works so well in person because you’re in the same room, where you know the rules,” added DePonto. “We want to recreate that. We want to build the trust, the rapport with our audience that says that you can be in the room with us.”

“We are very excited about giving audience agency,” Kanick continued. “Like, when you’re watching the show, you are talking to the magicians. You’re interacting. You are doing things. You’re making choices.”

That interaction will aided by the “secret package” that comes with each ticket, the contents of which the magicians are unwilling to divulge. “Mystery is an important element of magic, and I think that this is a good mystery,” said Kanick. “But I would add that we hope that people get to do stuff during the show, but also that it inspires them to dig deeper on their own after the show as well.

“Magic reaches through the screen in a really beautiful way, and if we can enhance that by having some objects or magic happening in your home, that’s also really exciting,” he added.

“This idea that magic happens all around you is what we’re aiming for,” said DePonto. Making that magic possible in this difficult time has been a challenge, both admit. It has also been, in some ways, enlightening, noted DePonto. “When we get back into a space where we can gather, we’re going to have taken away so much from this virtual space that we can apply,” he said. “I’m actually really excited to figure out what the next version of this show is.”

Already, these new possibilities have begun to weave their spell. “During one of the developmental shows we had someone in L.A., we had a magician in Chicago, someone tuned in from Ireland, and we all got to, like, share in these moments together from all over,” said Kanick. “That was real magic for me.”

For more information about the “The Conjurors’ Club,” “Behind the Scenes” series, A.R.T. Travels,  Virtually Oberon, and the weekly Lunch Room talks visit the A.R.T. website.