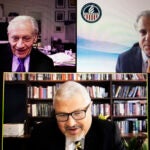 How Trump illustrated the need for more curbs on presidential power

It has bedeviled Americans almost since the country’s founding, but systemic racism is a solvable problem, lecturer in public policy Robert Livingston argues in his recent book, “The Conversation: How Seeking and Speaking the Truth about Racism Can Radically Transform Individuals and Organizations.” And at a Kennedy School talk this week, he outlined ways that individuals and organizations can move forward — especially when change is supported from the top.

“The million-dollar question that I’ve been working on is, how do we turn a solvable problem into an achievable solution?” he asked the audience at the moderated talk “Where Do we Go From Here: Making Progress Toward Racial Equity.” As a social psychologist, Livingston said he has found that subtle persuasion can be more convincing on the individual level than facts and figures.

Livingston cited a city police force he once helped train to be aware of implicit bias. The mostly white officers nodded passively at the facts he presented but had little reaction — “Until the one Black police officer on this force broke down in tears, because he could relate to all of this. The data was basically his life on the force — for example, some citizens in the town had actually called the police on him while he was in uniform walking the beat. All of a sudden the White officers are captivated; they now believe that racism is a real thing. I was a little bit annoyed because I thought, ‘How scientific is that?’”

This experience, however, led to his book’s main thesis: that human connection is the best vehicle for social change.

“I have a line that says ‘There can’t be social change without social exchange.’ I’m actually providing a template for information, conversation, and action,” he said. He said leaders at organizations need to think deeply about their problems and their causes before jumping to solutions — particularly when the problem is racism, which he noted many white Americans aren’t convinced even exists.

Once a problem is identified, the next step is to develop empathy, and then move to concrete strategies. This, Livingston said, involves changing how people look at each other — “decategorizing” them by racial stereotypes, and “recategorizing” them as individuals or teammates.

In a case closer to Harvard. Livingston reported how Massport changed the way it evaluated construction proposals for the Omni Seaport Hotel in Boston to include diversity as a selection criteria.

“I wrote a case on this at Harvard and when I interviewed one of the developers he said ‘I’m not racist, I’m just busy,’ meaning that his job in the past was to get from point A to point B. This policy now gave him an incentive to look for more diverse subcontractors and as a matter of fact, he did.” As a result, diversity on the Omni project rose to 35 diversity, with more Black- and Latino-owned businesses on the site.

“The moral of the story is, it never would have happened without the policy,” Livingston said.

Kennedy School Academic Dean Iris Bohnet, who moderated the talk, noted an organizational effort at the Kennedy School about a decade ago that responded to Professor Jane Mansbridge’s realization that most of the portraits on the School’s walls were of white men. Since then, new portraits have been commissioned.

Livingston agreed that changes of iconography have a psychological impact on biases. “It may seem like a small thing, but research has shown it’s not,” he said. “This gets back to the debate last year about Civil War monuments, and the impact that they had.”

Responding to a student question, he emphasized the need for organizational leaders to make the effort. “I don’t think any of the burden should be on the targets of discrimination, it should be on the leaders. It’s hard to make societal change, you can’t boil the ocean. But you can boil a kettle or a pond.”