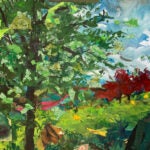 To everything there is a season

Imagine a class that asked you first to stop, and just listen.

Claire Chase’s first-year seminar, “Community Building and Social Justice Through Music,” did just that, and used the results to produce an original musical score that gives listeners a virtual soundwalk of Harvard’s campus.

“This is my favorite way to teach — and learn,” said Chase, professor of the practice in the Music Department. “In my own music education, the transformative moments for me always took place when an elder invited me to do work alongside them — not just for them — and when they invited me into their practice, assuming that I would rise to the occasion. I wanted to invite these freshmen into the process of making work alongside some of the greatest artists of our time.

“They have more than risen to the occasion.”

Chase commissioned the Houston composer, percussionist, and sound artist Susie Ibarra to create an interactive, virtual musical score with the 15 students in the seminar. Ibarra, who is based in Houston, Texas, has done soundwalk projects — which send participants into the world to listen intently to the noises around them — in New York, Pittsburgh, and the Philippines. But this was the first time that she had worked virtually with students, many of them first-time composers, on a college campus.

The result is Digital Sanctuaries Harvard, an app that invites the public on a virtual walk around and beyond Harvard’s campus through an ever-changing musical score.

“Students chose places of importance to them and created original compositions that combined field recordings, vocal and instrumental improvisations, electronic instruments, and original and historical texts,” said Chase. They formed “a dynamic sonic archive of the experiences of a freshman class searching for connection, community, and sanctuary in the midst of a pandemic,” according to the app description.

“These students are pianists, violinists, singer-songwriters, musicians in rock bands, music producers, budding music educators, and organization-builders, all from different musical backgrounds,” said Chase. “Over the first weeks of the term they learned recording and audio-editing techniques, worked with experimental vocal practitioners like Jen Shyu and Jasmine Wilson, with percussionists like Susie, and in a workshop with [electronic art consultant] Levy Lorenzo they all built their own custom-made electronic instruments.”

LyLena D. Estabine, a first year from Olathe, Kansas, who lived in Eliot House, said the soundwalk was an emotional experience.

“Walking around Harvard and Cambridge often felt surreal as I was struggling to understand my role as a Black woman at an exceptionally privileged, predominantly white institution in the midst of the civil unrest surrounding American racial injustice. My desire to speak out, and use my current position to make an impact, was waging war with the pragmatic understanding that everything those who came before me, my parents, and I did to get here could be eradicated in an instant if something went wrong or I went too far,” she said.

“As I was sitting in the Harvard Law School Yard, almost entirely empty because of COVID-19, I felt overcome with the isolation of not just my current predicament, but of every minority who has witnessed so many others like them be denied and rejected, while they continued to push for success in the face of potential failure. While many of their voices were lost to time, I could hear their stories in the steps, the railings, the trees, and locked doors of the library, the benches, and the melancholy melodies that filled my head as I sat there; as our country continues to move toward understanding and reconciliation, I thought it might be helpful if other people could hear them too.”

Outside the Zoom classroom, each student took a weekly walk to find their site and to listen. Most students lived in Cambridge, but a few were scattered around the world. Digital Sanctuaries Harvard includes compositions that incorporate volleyball courts in Taipei, the Bangkok international airport, a rocky beach in Seattle, the Charles River, Fresh Pond, the Harvard Square T stop, and the steps of Harvard Law School. Each site on the app includes a biography of the student, a selfie, and a program note about what this moment has meant to them.

“The campus and the city sound different in the fall of 2020 than ever before. Think of the wildlife that has moved in now that the campus has de-densified,” Chase said. “We all hear the world differently this year. But what does the freshman class at Harvard hear that we do not? How do they tell their stories through sound? They are by turns meditative, whimsical, expressive of racial tension, grief, loss, hope; we’re not trying to tell a single story, but many stories.”

Digital Sanctuaries Harvard is available for free in the Apple app store. The entire composition lasts one hour, and can be heard in the sequence the students imagined, or in in your own order. Collaborators included computer scientist Rommel Feria, interaction designer Shankari Murali, and audio engineer Jake Landau.