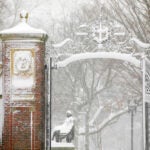 Elections will take place in April-May

Once again this spring, Harvard degree holders will have the opportunity to vote for new members of the Harvard Board of Overseers and elected directors of the Harvard Alumni Association (HAA).

The elections will begin April 1. Eligible voters will have the option of voting either online or by paper ballot. Completed ballots must be received by 5 p.m. (EDT) on May 18. All holders of Harvard degrees, except officers of instruction and government at Harvard and members of the Harvard Corporation, are entitled to vote for Overseer candidates. All Harvard degree holders may vote for HAA elected directors.

The candidates listed below will be considered by voters for five anticipated vacancies on the Board of Overseers and for six openings among the HAA elected directors.

The eight candidates for Overseer and the nine candidates for HAA elected director have emerged from this fall’s deliberations of the HAA nominating committee. The committee’s voting members include three current or recent Overseers as well as 10 Harvard alumni of varied backgrounds and experience who are appointed by the HAA executive committee. Through its deliberations, which extended over the fall, the nominating committee reviewed approximately 300 individuals proposed for inclusion on the Overseers ballot and approximately 200 individuals proposed for inclusion on the ballot for HAA elected directors.

Candidates for Overseer may also be nominated by petition — by obtaining a required number of signatures from eligible voters. The deadline for all petitions is Feb. 3. Eligible voters may go to elections.harvard.edu/elections-process for more information.

The Board of Overseers is one of Harvard’s two governing boards, along with the President and Fellows, also known as the Corporation. Formally established in 1642, the Board plays an integral role in the governance of the University. As a central part of its work, the Board directs the visitation process, the primary means for periodic external assessment of Harvard’s Schools and departments. Through its array of standing committees, and the roughly 50 visiting committees that report to them, the Board probes the quality of Harvard’s programs and assures that the University remains true to its charter as a place of learning. More generally, drawing on its members’ diverse experience and expertise, the Board provides counsel to the University’s leadership on priorities, plans, and strategic initiatives.  The Board also has the power of consent to certain actions such as the election of Corporation members.  The current membership of the board is listed here.

The names of the candidates nominated by the nominating committee appear below (in alphabetical order).

The HAA nominating committee has proposed the following Overseer candidates for the 2021 election.

The HAA Board is an advisory board that guides the fostering of alumni community building, creating University citizens of alumni and alumni volunteers. The work focuses on developing volunteer leadership, increasing and deepening alumni engagement through an array of programs that support alumni communities worldwide. In recent years, the board’s priorities have included strengthening outreach to recent graduates and graduate school alumni; supporting antiracism work in alumni communities; and continuing to build and promote inclusive communities.

The HAA nominating committee has proposed the following HAA elected director candidates for the 2021 election.