Turning the problem of cancer metastasis into an opportunity 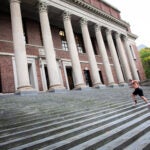 When a patient with cancer is told the devastating news that their disease has spread, or metastasized, to a new part of their body, it has most often moved to their lungs. There are no treatments approved for lung metastasis, which is the leading cause of death from metastatic disease. That grim prognosis may soon be less grim thanks to a new technique developed by researchers at Harvard’s Wyss Institute for Biologically Inspired Engineering and John A. Paulson School for Engineering and Applied Sciences (SEAS).

Rather than viewing lung metastasis as unfortunate fallout from a primary tumor elsewhere, the team focused on treating the metastasis itself by delivering immune-cell-attracting chemicals into lung cancers via red blood cells. Not only did this approach halt lung tumor growth in mice with metastatic breast cancer, it also acted as a vaccine and protected the animals against future cancer recurrences. The research is reported in Nature Biomedical Engineering.

“Our approach is the exact opposite of conventional cancer treatments that focus on getting the immune system to recognize and attack the primary tumor, because those tumors are often large and difficult for immune cells to penetrate,” said co-first author Zongmin Zhao, a postdoctoral fellow at the Wyss Institute and SEAS. “We recognized that the high density of blood vessels in the lungs provides much better access to tumors there, offering a unique opportunity to induce an immune response by targeting the metastasis.”

An EASI solution to a hard problem

Delivering therapies to their intended target while sparing the rest of the body is one of the grand challenges of medicine. The liver and spleen are incredibly efficient at filtering out any foreign substances from the blood, meaning that drugs often need to be given at a high dose that can cause harmful off-target side effects. Overcoming this barrier to effective treatment is a major focus of Wyss core faculty member Samir Mitragotri’s work, and his lab recently discovered that attaching drug-filled nanoparticles to red blood cells allows them to escape detection and stay in the body long enough to deliver their payloads while minimizing toxicity.

Zhao and his co-authors decided to use that technique to see if they could deliver immune-system-stimulating chemicals to metastatic lung tumors rather than chemotherapy, which can damage lung tissue. They chose a chemokine, a small protein that attracts white blood cells, called CXCL10 as their payload.

When cancer goes through metastasis, the branching blood vessels that allow oxygen to diffuse from the lungs’ air sacs into red blood cells are so tiny that a rogue cancer cell circulating in the bloodstream can easily get stuck there and take up residence, eventually growing into a secondary tumor. Once established, metastatic tumors unleash a campaign of chemical cues that thwart the body’s defenses, hampering efforts to induce an immune response.

“Lung metastases deplete certain kinds of chemokines from their local environment, which means the signal that should attract beneficial white blood cells to fight the tumor is gone. We hypothesized that providing that chemokine signal at the tumor site could help restore the body’s normal immune response and enable it to attack the tumors,” said co-first author Anvay Ukidve, a former graduate research fellow at the Wyss Institute and SEAS who is now a scientist at a pharmaceutical company.

The team first optimized their nanoparticles to ensure that they would detach from their red blood cell hosts only when the blood cells made their tight squeeze through the lungs’ tiny capillaries. They also decorated the nanoparticles’ surfaces with an antibody that attaches to a protein commonly found on lung blood vessel cells called ICAM-1 to help increase the nanoparticles’ retention in the lungs. These nanoparticles were then filled with the chemokine CXCL10, creating a package the researchers named ImmunoBait. ImmunoBait particles were then attached to mouse red blood cells to create a therapeutic delivery system named erythrocyte-anchored systemic immunotherapy (EASI), and injected into the bloodstreams of mice with breast cancer that had metastasized to their lungs.

ImmunoBait particles stayed in the animals’ lungs for up to six hours after EASI injection, and most of them were distributed in and around the metastases. Treatment with EASI led to strong expression of CXCL10 for up to 72 hours, suggesting that delivering the chemokine stimulated the body to start producing it on its own, despite the immunosuppressive tumor microenvironment. To find out exactly what effect the delivered CXCL10 had on the mice’s immune systems, the team analyzed the different types of cells present in the lungs before and after EASI injection. They observed increases in the infiltration of T helper type 1 (Th1) CD4 cells, which release pro-inflammatory chemicals that help keep tumors under control, as well as effector CD8 cells and natural killer (NK) cells, which drive the direct killing of cancer cells.

Armed with evidence that their system could attract immune cells to lung metastases, the team then tested its ability to slow or halt the progression of the disease in mice. They first removed the animals’ breast cancer tumors (to mimic the surgery that patients often undergo to treat their primary tumors), then injected them with either CXCL10 alone, ImmunoBait nanoparticles alone, or EASI.

EASI inhibited the progression of lung metastasis with four-fold and six-fold greater efficacy than free CXCL10 and ImmunoBait, respectively. All of the EASI-treated mice had fewer than 20 metastatic nodules after 37 days, and 25 percent of them had only one nodule. In contrast, mice that received the other therapies had anywhere from two to 100 nodules. The mice that received EASI also had nearly three-fold better survival: while animals in all the other treatment groups succumbed to their disease in less than 20 days, about 25 percent of the EASI-treated mice survived for 40 days. They were also free of any signs of off-target toxicity or other negative effects from the treatment.

Because EASI effectively activated the immune system against lung metastases, the researchers wondered if that activation could provide lasting protection against future recurrences of the same cancer. They analyzed the blood of mice that had received EASI and observed an increased number of memory CD8 cells, which persist long-term after an immune threat and can sound the alarm if that threat resurfaces. To test whether those memory cells provided sufficient protection, the team re-inoculated mice with the same tumor cells two days after their last treatment. Mice that had been treated with EASI had significantly lower tumor growth and tumor weight than mice that were injected with saline or left untreated, demonstrating that local treatment of lung metastases produced systemic immunity against tumor development.

“These findings highlight the ability of our EASI system to convert the biological adversity of metastasis into a unique therapeutic opportunity against metastatic cancers,” said senior author Mitragotri, who is also a Hiller Professor of Bioengineering and the Hansjörg Wyss Professor of Biologically Inspired Engineering at SEAS. His team is continuing to optimize EASI by experimenting with delivering different types of chemokines via ImmunoBait nanoparticles, and are exploring the combination of EASI with currently approved cancer therapies to identify potential synergies. 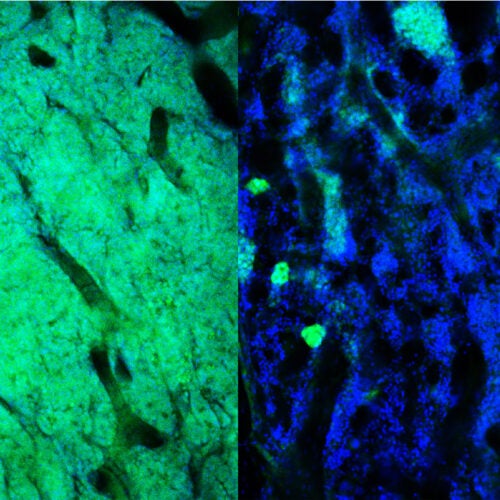 A unique characteristic in resistant cancer cells makes them easier to identify, eliminate

“This unique bioinspired approach to cancer therapy is a wonderful example of the out-of-the-box thinking that we encourage and support at the Wyss Institute — by leveraging the body’s own red blood cells to deliver drugs to capillary blood vessels of the lung where many metastases form, Samir’s team has developed an entirely new type of immunotherapy and opened the door to potentially lifesaving therapies,” said Wyss Institute Founding Director Don Ingber who is also the Judah Folkman Professor of Vascular Biology at Harvard Medical School and the Vascular Biology Program at Boston Children’s Hospital, as well as professor of bioengineering at SEAS.

This research was supported by the Wyss Institute for Biologically Inspired Engineering and the National Institutes of Health.