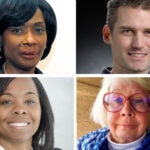 Four recognized for service and leadership

Shortly after Maria Dominguez Gray took the helm at the Phillips Brooks House Association, the organization for undergraduate volunteer opportunities at Harvard, two students came up with the idea of launching an overnight shelter for homeless youth.

Dominguez Gray, who had been a deputy director for the Phillips Brooks House Association (PBHA) for 12 years, wanted to support the students, but finding a location was proving difficult. Like other times when she needed advice, she turned to Frank Duehay ’55, who was on the PBHA’s board of trustees and had become a cherished mentor.

Known as “Mr. Cambridge” for having served on the Cambridge City Council for nearly 36 years, including three terms as mayor, Duehay threw all his support behind Dominguez Gray and the project. In December 2015, Y2Y Harvard Square, a student-run overnight shelter, opened in the basement of the First Parish Unitarian Universalist Church in Cambridge.

“Frank was the true embodiment of service and love,” said Dominguez Gray, PBHA Class of 1955 Executive Director. “He was so dedicated to his hometown of Cambridge and the student leaders, and he truly believed in PBHA’s mission of students and community members partnering to meet the most pressing needs in Greater Boston and make this world a better place.”

Duehay, 87, died Nov. 20 at Beth Israel Deaconess Medical Center of acute leukemia, but his legacy will be remembered at Harvard and beyond. After graduating with a bachelor’s degree in English, he later earned a master’s degree in teaching the subject and a doctorate in education from the Graduate School of Education. Teaching and public service were his passions.

At Harvard, Duehay served as both acting director of admissions and assistant dean in the Graduate School of Education. He received the Harvard Alumni Association Award in 2006.

Duehay chaired PBHA’s Centennial campaign, which raised a $7.6 million endowment fund that has sustained PBHA for more than a decade and allowed the organization to continue offering 80-plus programs to approximately 10,000 youth in Cambridge and the Greater Boston during the pandemic, said Dominguez Gray. The campaign included a gift from Duehay’s classmates from 1955 to permanently establish the Class of 1955 Executive Director, the position held by Dominguez Gray.

Duehay retired from public service in 2000, but he was involved in Harvard alumni affairs and Cambridge Rindge and Latin School, where he chaired Celebrate CRLS, a yearlong initiative to engage the support of all constituencies associated with the high school. He was chairman of the board of trustees for the Cambridge Health Alliance, a governmental health and hospital system affiliated with Harvard Medical School, the Harvard School of Public Health, and Tufts Medical School.

His trajectory in local government convinced Duehay of the transformative impact of public service on students’ lives because it gives students a chance to recognize their own responsibility to serve the community and gain leadership tools, said Dominguez Gray. He believed that Harvard students should hold a lifelong commitment to give back in return for their education.

Along with his commitment to public service, Duehay stood out through his long political career because of his low-key demeanor, friendly disposition, sense of humor, and the genuine interest he showed in listening to people’s concerns.

“He was propelled by the idea of a better society,” said his classmate Robert Blacklow, M.D., senior lecturer of global health and social medicine at Harvard Medical School. “You wouldn’t know he was a politician and that was his genius: being able to work through politics without being seen as a politician.”

Blacklow remembers having lunches with Duehay at the Faculty Club, and seeing wait staff greet the former politician with a friendly, “Hello, Mr. Mayor,” or “Hello, Frank.”

“Frank was a people’s person, but he did it quietly,” said Blacklow. “He was not a loud person. He was quiet, but very determined. Once he got a thought in his mind, he would grab it and would not let go of it until he found a way to at least have it moved forward a bit.”

Warren Little ’55 also remembers Duehay with affection. “He had a real ability to listen to people and help them if they needed help, even with a suggestion that would be helpful without telling them how to run their business,” said Little. “He offered quiet advice, and he made many friends because he was so laid back and he was always trying to help where we could.”

In 2005, on the 50th anniversary of his Harvard graduation, Duehay was able to reflect on his legacy. In the personal entry for the “Red Book,” the class reports that are a longstanding College tradition, Duehay wrote of his pride for all the contributions he had made during his political career and his commitment to public service. The entry also offered a glimpse of his humor, down-to-earth personality, and passion for making things happen.

“Why won’t I write a book about the 36 years I spent in local government in Cambridge?” Duehay wrote. “When I started, Cambridge was a declining industrial city with high unemployment and a dismal economy. Today, it is a very successful high-tech city with a booming economy and triple A bond ratings. But I won’t write the book because it’s hard to write a good one and I didn’t keep careful notes. I was too busy to do that. I was an actor, not the scholar.”