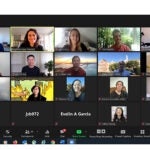 Everything about Carol Davis, who retired this fall after 50 years, is impressive. But because this story involves the Physics Department, it seems only appropriate to quantify the response to her departure with a little data.

At her Zoom retirement, 224 people from across the globe joined a 2-hour, 48-minute celebration honoring the 70-year-old Davis. Three people read poems; two gave live musical performances; and 21 past presidents of the Kuumba Singers serenaded Davis, whose time at Harvard predated the Science Center.

“I can’t think of anybody else who has made as big of an impact in the department,” said Melissa Franklin, Mallinckrodt Professor of Physics, who worked especially closely with Davis (who was also her faculty assistant for 20 years) as department chair from 2010‒2014. “I consider her my friend, and you don’t have that many friends in academia who sit in your building. Everyone is not sure what it will feel like to not have her presence.”

Never a wallflower and the department’s most dedicated supporter of students, Davis’ presence was felt most strongly on the second floor of Jefferson Laboratory, where her tiny office has been likened to a clown car with a seemingly endless parade of graduate and undergraduate students coming in and out.

“I have been building spirits there for decades,” Davis said. “When I first worked for Melissa, she taught a lot of undergrad courses, and sometimes students would have to wait for her in my office. I always had to think of things to keep me from being bored and them from not feeling awkward. Before I knew it they were coming just to see me. Then it seemed like if they had issues, I was listening. Students needed someone other than their family or friends, someone who wouldn’t pass judgment. I may not have the answers, but I could help them through what they were thinking.”

Dispensing food and relationship and marriage advice as the undergraduate and graduate coordinator, Davis taught students to advocate for themselves with faculty and administrators and helped them with funds if they didn’t have enough for bus fare or food.

“Sometimes I’d have six students in there,” she said. “We’d talk politics, race relations, even gender pronouns, which they helped me put under my title on my email.”

In her early years as technical secretary, she typed manuscripts for faculty research and books. She helped elderly professors put in their eye drops and straightened their suspenders before they gave important talks.

Hired on the very same day she applied, Davis took care of course preparation, photocopying and collating work for department chair Robert Pound. When he stepped down, she worked for Norman Ramsey, who went on to win the Nobel Prize.

“Students needed someone other than their family or friends, someone who wouldn’t pass judgment. I may not have the answers, but I could help them through what they were thinking.”
— Carol Davis

“It was amazing. We got so many calls, and I answered mostly all of the media questions related to Professor Ramsey and made appointments for them to meet with him. But when they came in, my blond counterpart (who worked for the faculty member in the adjoining office) was there, and they directed their questions to her. They thought she worked for him and me, a person of color, didn’t.”

Davis was especially fond of the Kuumba Singers, having attended the Black choir’s very first concert in 1970. She attended with her sister Romaine, who also worked at the University.

“We went to see them, and were over-the-top amazed. So the next concert I invited my parents,” she said. “I’ve always tried to go to their holiday concert and in the spring. I get all my girlfriends in my bowling league to go.”

Davis will be remembered in the oral history she provided to the American Institute of Physics and in the eponymous fund the department has set up to continue honoring her by dedicating efforts toward diversity education.

“We’re making a fund for inclusionary resources. We want to continue the conversation about including people of color, and from all backgrounds, in physics, which is still quite male and quite white,” said Franklin.

Davis was overcome with emotion several times during the Zoom celebration. Two weeks later, she was still awed by the many wishes.

“I am who I am, but you don’t realize the impact you have until you see something like that. I’m anxious to watch it again and absorb it all. I was so taken aback about how people felt about me because it’s how I felt about them. It has never been hard for me to tell a student I love them, that I’m proud of them,” she said.

In retirement, she has been cooking feverishly and plans to travel to visit her sisters in California this month. She hopes to do some serious traveling post-COVID.

“I met students from all over the world at Harvard, to find that even early in my life that we were all the same. We all have the same goals. We all have parent issues. Many had experienced racism, and violence,” she said. “I tried to make my office a space where none of that happened. I always said: ‘If the world was like this office, the world would be a better place.’”