Students make the show go on 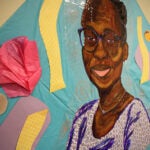 Three new pieces. Three ways past the clampdown. Each of them unique.

Members of Harvard’s Theater, Dance & Media’s (TDM) production studio have shown that it’s possible to improvise, create, and stage new works even when the performers can’t see the audience, and this semester many of its students and faculty are ready to go one step beyond.

“The pandemic hit right as our spring show was about to go into production,” said James Stanley, artistic producer and lecturer in TDM. “That was an interesting transition right there. On the one hand, it kind of took the legs out from under what we had planned to do. But on the other hand we were extremely lucky to have the team in place who used the students’ skills and their abilities to put together three different pieces.”

Very different, indeed. Take “The Great Emu War of 1932,” a mix of acted scenes and animated segments that streamed on YouTube, telling the story of the Australian military’s efforts to contain the enormous birds’ population in Western Australia, where they were attacking wheat fields.

Or another work, which used a video game world as its set. “Kaldi: Goats In Minecraft Getting Coffee” takes viewers — some interactive, some just along for the ride — through students’ simulations of Farkas Hall, a jungle grove, a monastery, and a village, all populated by rambunctious goats. The action is based on Kaldi, an Ethiopian herder who, according to legend, sometime around 850 A.D. noticed how jumpy his goats got after eating the berries of an arabica plant. Intrigued, he gave some of the berries to a local monk, who used them to brew the world’s first cup of coffee.

For Finn Bamber ’22, a TDM concentrator who worked on the show, it was the perfect solution to the lockdown.

“We ended up deciding to go for Minecraft and make it something that really we could only do in that medium,” said Bamber by the phone from Toledo, Ohio. “One of the things about Minecraft that I think makes it really well-suited for theater is that there is no particular objective … our point was basically to progress through the different storylines and explore.”

Devonne Pitts and a team of student collaborators’ Zoom-based piece, “As if by Magic,” was inspired by Alice Walker’s book “In Search of Our Mothers’ Gardens.” The invitation-only spring 2020 production explored themes of memory, matrilineal knowledge, “and the tools women of color use to care for themselves in times of transition,” according to a description on the TDM website.

“We felt a healing space would be more conducive to the moment we were living in,” said Pitts, of the work that at one point asked participants to reflect on important keepsakes from home. “We were just trying to create some intimacy with objects that we might brush past in our everyday … and getting us more accustomed to being back in spaces we most likely hadn’t been in a while.”

This fall only a small fraction of the student body is on campus, with many TDM concentrators opting for a gap year, and student gatherings are sharply limited in order to reduce the potential spread of COVID-19. Bamber, one of the leave-takers, said while he found “learning through the computer… very, very difficult,” during his year away from Harvard he plans to build on his springtime success by using different media to create communal theater. Recalling how the Minecraft piece allowed audience members to briefly convene in the virtual Farkas Hall lobby during intermission, he said, “I had this sense of, ‘Oh, we are all in this shared space’ in a way that I hadn’t felt since March … it was that same feeling of a series of strangers coming together and having the same space and having the same experience in this lobby. … Minecraft as a medium, I think, was a really positive thing and I’m excited to see if I can take that other places.”

Pitts, on campus this fall, said she used the summer to expand on the virtual work she did in the spring, creating an online version of Shakespeare’s “Rome and Juliet” that blended the live action on Zoom with prerecorded segments captured on cameras and iPhones. Editing the recorded video allowed directors to better control the flow and pacing, said Pitts, and tricks like color-correcting, fast-paced editing, and adding sound in post-production amplified its “emotional intensity.” The recorded pieces also “helped simulate proximity and being close to other bodies and spaces,” she said, something that’s harder to capture on Zoom in real time.

“I think people are becoming more comfortable with experimenting … to really brainstorm ways, if we can’t necessarily simulate the liveness of a theatrical stage and being in that area at the same time as actors on the stage, how we replicate the newness and the ingenuity that comes with that space while we’re all virtual, and while we’re all distant from each other.”

Stanley said that though this semester is still being planned in full, it will include a virtual event with director Spike Lee, an online workshop with playwright and filmmaker Young Jean Lee, as well as other online master classes and a spring production led by director Tara Ahmadinejad, known for her work in the virtual theater world, and playwright and TDM faculty member Phillip Howze. And administrators are continuing to explore ways to incorporate emerging technologies into the curriculum. Through the summer, TDM faculty researched how professional theaters are adapting, and the different platforms they are using to ensure the show goes on, including a type of reverse-engineered version of Zoom that allows users “to aggregate images and then control the output of the images to create different frames and put people together,” said James. “There is a learning curve to all of it, so we’re really kind of seeing what we can do, what resources we have.”

This semester, playwrights and directors Jay Stull and EllaRose Chary will lead a TDM production based on student-conducted interviews around a topic of their choosing. Chary, who produced a short musical during COVID restrictions that is meant to be watched on a smartphone, called it a “moment of opportunity” and said she is excited to see what the students come up with.

Moving forward, Pitts said she is eager to see the ways in which the program will continue to help students adapt and find new ways to experiment with form.

“I think you start to open yourself up to questions you would have never asked, had we not been put in this situation in the first place. So I do think there’s a heightened curiosity and interest in really figuring out what is this nebulous thing we call theater. I think TDM will be trying to figure out what that definition is, or helping students want to learn more about what the definition is, and providing the resources for that exploration.

“If there’s any group of people in the world who would be really adaptable to change like this, it would be artists, because there’s always some challenge,” she said. “Even the best show you’ve ever seen has had some difficulties, some obstacles thrown at it. That’s kind of inherent to the work in the first place. So it’s just another challenge to work around.”