Richard A. Smith dies at 95 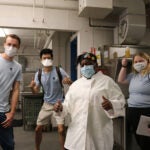 Richard A. Smith, a former member of both of Harvard’s governing boards, has died at age 95. Smith was a member of the Harvard Corporation from 1991 to 2000, and an Overseer from 1989 to 1991. A prominent philanthropist, executive, nonprofit trustee, and Harvard citizen, he and his wife, Susan, provided a transformative gift to the University for the redesign and renovation of what was formerly Holyoke Center, and the Richard A. and Susan F. Smith Campus Center opened in 2018.

Smith was also a member of the governing boards’ Joint Committee on Appointments for eight years, sat on the executive committee of the Committee on University Resources, and was a member of several visiting committees. In addition, he served on the board of the Harvard Management Company, which manages the University’s endowment.

“Dick Smith loved Harvard,” recalled Harvard President Larry Bacow, “and he always looked on the institution with a critical eye — wondering how it could and should be improved for the people who would care for it after him. The University we know today would not be the same without his efforts and his generosity. Together with his wife Susan, Dick created for all of us a campus center that has truly become the heart of our community, a gathering place that celebrates the best of what we can be when we are together — creative, energized, and optimistic. He will be greatly missed and fondly remembered.”

He was a member of the College Class of 1946 and had enlisted in the Navy during World War II. He was awarded an honorary degree from Harvard in 2001, cited for “[h]is incisive mind, his concern for the fundamental values and purposes of Harvard, his great experience, and his eye for what is really significant in a given situation.” His honorary-degree citation recognized him as a “superlative and civic-minded executive, whose insight and dedication have invigorated medical research and advanced the enterprise of education.”

An engaged and devoted alumnus, Smith was chair of the Class of 1946, chair of his 50th and 55th Reunion Gift Steering Committees, and a member of the Harvard College Fund Council.

Smith graduated from the Browne & Nichols School in Cambridge in 1942. At Harvard, he lived in Lowell House. He played squash, tennis, basketball, and football, and he participated in the Navy V-12 program.

After World War II, Smith went to work for General Cinema Corp., then a family-controlled drive-in theater chain. Rising to become chairman and  chief executive officer, he led the company’s development into a diversified enterprise known as Harcourt General Inc., a Fortune 500 company that at various times included movie theaters, publishing houses, retail stores (including Neiman Marcus), and other lines of business.

For decades, Smith was a leading figure in Boston’s nonprofit community. Along with his wife, he had a distinguished history of philanthropy and service not only to Harvard but to affiliated medical institutions, including the Dana-Farber Cancer Institute, where he was chair of the board of trustees, the Joslin Diabetes Center, and Beth Israel Hospital, where he was a trustee.

His and Susan’s legacy gift to Harvard made possible the Richard A. and Susan F. Smith Campus Center, which has become an anchor for Harvard’s campus and a crossroads for the community. At its opening, President Emerita Drew Faust said the re-created center would “enable us to change how we can be together, how we can learn from one another, and how we can advance the fundamental purposes of this extraordinary institution. The Smith family’s generosity launched us onto the path of making this real. They enabled this dream, and we are incredibly grateful.” The center has won numerous awards since its opening, including the Harleston Parker Medal.

Other gifts from the couple include the Smith Family Graduate Science and Engineering Fellowship, which from 2011 to 2019 has provided 175 awards to almost 150 Ph.D. students in the sciences at the Graduate School of Arts and Sciences and the John A. Paulson School of Engineering and Applied Sciences (SEAS). The Smiths also endowed graduate fellowships supporting students in the arts and in Jewish studies in the 1980s, and made other generous gifts supporting the Faculty of Arts and Sciences and SEAS, including support that enabled the launch of the Harvard Integrated Life Sciences Graduate Program.

Smith was co-founder and chair emeritus of The Smith Family Foundation, whose mission is “to effect permanent positive change in the lives of individuals and families across Greater Boston, especially in economically disadvantaged communities.”

Smith’s generosity and drive to serve extended deep into the Boston nonprofit world, with several prominent leadership roles for diverse organizations whose missions ranged from cancer research to the arts to education. He chaired the board of Facing History and Ourselves and served as a trustee, director, or member of organizations that included the American Academy of Arts and Sciences, Boston Symphony Orchestra, Combined Jewish Philanthropies, John F. Kennedy Library Foundation, and United Cerebral Palsy Research and Educational Foundation.

Upon his departure from the Corporation in 2000, Smith spoke of what his service to Harvard meant to him, describing it as an “awesome responsibility” that “has challenged my academic capabilities and pressured me to mine my business and social service career experience in order to contribute as much as possible.”

“In my opinion, Harvard is at the peak of its intellectual and financial strength, and is poised to render continuing great service to mankind.”