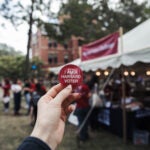 Harvard University’s Richard A. & Susan F. Smith Campus Center was recently awarded the Boston Society of Architects’ Harleston Parker Medal. Established in 1921 in memory of Boston architect J. Harleston Parker, the medal is the highest honor awarded by the Boston Society of Architects (a chapter of the American Institute of Architects) and recognizes “the most beautiful piece of architecture, building, monument or structure within the City or Metropolitan Parks District limits.”

The awards jury called the building “An ode to Josep Lluis Sert, this reimagined campus center respects all the strength and smartness of Sert’s original building while drawing it forward into the twenty-first century. The renovation was a Herculean task, turning the 1960s tower into a true community asset. Once, this building in the heart of Harvard Square was an uninviting concrete corridor. Today, it is opened and enlivened. The new glass entrance bumps out into the plaza and creates a two-floor commons that welcomes the urban and university communities. Green walls and details in warm wood add vitality and soften once-hard spaces. People clearly love being here. The Smith Campus Center is comfortable, contemporary, and contextual. As we enter an age in which we must creatively and considerately upgrade our existing building stock, the Smith Campus Center stands as a shining example, reinvigorating the used and historic with success and humanity.”

Additionally, in 1967, the Boston Society of Architects honored the building — then known as Holyoke Center — and its architects, Sert Jackson & Associates, led by Josep Lluis Sert, then dean of Harvard’s Graduate School of Design.

The Smith Campus Center has received 10 other awards for its design since opening in August 2018.

For more information on the Harleston award , visit the website.