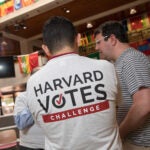 The center is an anchor for Harvard’s campus, and now a crossroads for the entire community. The first and second floors include the Moise Y. Safra Welcome Pavilion and Plaza along Massachusetts Avenue, where people can mingle, join tours of Harvard, and take in views of the square and the city beyond. Outside, new plazas open to Mass. Ave. and Mount Auburn Street; while indoors people lounge in large interior spaces with soaring ceilings, and a new roof deck along Dunster Street.

With its open-air vitrine garden, glass facades, and green walls irrigated with UV-filtered rainwater harvested from the center’s rooftop, the renovations increase access to daylight and nature.

Hungry passersby can grab a bite at Pavement Coffeehouse, Swissbäkers, Bon Me,  Blackbird Doughnuts, and Oggi Gourmet, which will be joined in the coming weeks by Whole Heart Provisions and James Beard winner Jody Adams’ Saloniki.  The center also offers spaces for meeting and performances, or a game of chess at any of 14 new tables.

The Campus Center first opened in 1966, designed by renowned architect Josep Lluís Sert, dean of the Harvard Graduate School of Design from 1953 to 1969. The renovations were designed by Hopkins Architects of London, with the Cambridge-based firms Bruner/Cott as executive architect and Michael Van Valkenburgh Associates  as landscape architect.

Learn more about the Smith Campus Center, as well as Harvard’s Common Spaces program, which oversees events, activities, and reservations in the new spaces by visiting commonspaces.harvard.edu.