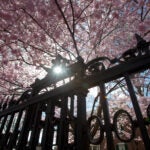 If ratified, new contract will provide range of benefits and protections

After months of negotiations, Harvard University and the leadership of the Harvard Graduate Student Union United Auto Workers (HGSU-UAW) representing more than 4,000 members, have agreed to the terms of a one-year contract that embraces a wide range of benefits and protections for graduate and undergraduate employees in all Schools, Provost Alan M. Garber said in an email to University faculty on Monday.

The tentative accord, which still requires ratification by the union membership, represents nearly two years of talks between University officials and the union’s bargaining committee to find a workable contract while advancing Harvard’s mission of teaching, learning, and scholarship, and furthering academic freedom.

“Our students are the heart of our institution, and we have approached these negotiations with their best interests in mind,” wrote Garber. “With the Union, we have reached a tentative agreement that we feel appropriately addresses the employment-related concerns of our student workers, while also ensuring the integrity of the University’s research and teaching mission. “

For the fiscal year beginning in July, the proposal guarantees a 2.8 percent compensation increase for research assistants and teaching fellows, along with a minimum hourly pay rate of $16 for nonsalaried student workers and $17 for hourly instructional workers. It also provides nearly $1 million in additional financial assistance for costs associated with health and dental insurance, childcare, and emergency situations.

Throughout the negotiation process, the question of how student-worker harassment and discrimination allegations should be handled was a key area of difference. The proposed contract features a range of provisions to address those concerns, including seats for HGSU-UAW representatives on the existing Title IX Policy Review Committee that includes faculty, staff, and students from across the University; seats for HGSU-UAW representatives on two planned committees that will make recommendations on University policies and procedures for addressing forms of discrimination and misconduct that fall outside federal Title IX regulations; and protections against retaliation for pursuing discrimination claims.

Graduate students at Harvard launched a union organizing campaign in 2015. The following year, the National Labor Relations Board ruled that graduate students at Columbia University could unionize, opening the doors for similar efforts at private colleges and universities across the U.S. Harvard graduate students voted in favor of unionizing in April 2018 and talks with the University began six months later, on Oct. 15. In December 2019, with negotiations at an impasse, HGSU members went on strike, picketing Harvard Yard and the Longwood Campus. The University engaged a federal mediator in January 2020 to help the sides reach an agreement.

On Tuesday, HGSU’s bargaining committee posted a message on the union’s site announcing it had reached a tentative accord and unanimously supporting ratification. If approved by the union, the contract will be in effect through June 30, 2021.