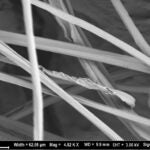 The sound of the Harvard’s Arnold Arboretum is about to change, as an innovative new app brings the scope of its landscape to life.

Expeditions — a free, interactive mobile tour app set to launch in June — reveals and celebrates all of the Arboretum’s living collections, putting spontaneous learning about nature right in the palm of one’s hand.

“Only a fraction of the Arboretum’s tens of thousands of annual visitors come into the Hunnewell Visitor Center, but most people are walking around the grounds with a smartphone,” said Amy Heuer, the Arboretum’s visitor engagement fellow and the creator of the Expeditions Mobile App. “We’re trying to meet visitors where they are, out in the landscape, and in the way that they’re used to learning — from their phones.”

Through audio, text, and images, Expeditions acquaints users with the institution’s history, plant collection and conservation, horticulture, science, and children’s education. Showcasing more than 60 plants throughout the Arboretum’s 281 acres, the app features two linear tours: a half-mile introductory walk along Meadow Road, featuring stories about the Arboretum’s past, mission, and research; and a quarter-mile stroll through the Explorers Garden, with stories from its 148 years of collecting plants around the world.

Stops on the Expeditions tours can be visited in any order, and at each stop users can both read and hear detailed narrations about the highlighted plants from the Arboretum’s experts. In addition to tours, users can explore other plants and sites on the grounds, and use the app’s “dig deeper” option to tap additional resources, including the Arboretum’s website, archives, and photographs. Available in English, Spanish, and simplified Chinese/Mandarin, Expeditions also includes more than 50 narratives from Arboretum staff, who share stories about their work in an inviting, conversational format.

“We didn’t just record interviews because we have a fabulous staff who tell entertaining, compelling stories. Our goal was to feature a range of experiences and voices to show that there are many ways to have meaningful relationships with plants,” Heuer said. “We’re in the midst of a climate crisis, and I think people will only start standing up for the environment — in ways big and small — when they feel connected to it.”

Heuer, whose background is in marketing and digital project management, said when she began work on the app in 2018 she suffered from “plant blindness,” the human tendency to take plants for granted. Spending time at the Arboretum opened her eyes to the botanical in a profound way. She said that’s why she created the app, which expands on the Arboretum’s mission to help foster a greater understanding, appreciation, and stewardship of the Earth’s botanical diversity and its value to humankind.

“Expeditions users may experience the feeling of being on a journey, as so many of the stories are tied to the plant collectors who collected seed for trees that are now upwards of 120 years old, which is something really special,” Heuer said.

Michael Dosmann, the keeper of the living collections and a narrator on Expeditions, shares the beauty of plants in their natural habitat in this excerpt about the Chinese plum yew (Cephalotaxus):

In 1980, a group of scientists and researchers embarked on a three-month trip through the Shennongjia Forest in central China. Representatives from five American institutions, including the Arnold Arboretum of Harvard University, joined colleagues from several Chinese institutions, tracing a route across Hubei Province … The seed for the Chinese plum yew was collected … in a thicket between a road and stream 5,000 feet above sea level … There’s something completely different when you see that plant growing in the wild, raw, unvarnished in its natural habitat. You get a broader appreciation and an understanding for what comprises that species’ essence.

Documenting the history of living objects, especially those extinct in the wild, offers a unique value, according to Jonathan Damery, Arnoldia editor and Expeditions narrator for the Franklin tree (Franklinia), first described by father and son colonial plant explorers John and William Bartram in 1765, and last seen in the wild in 1803.

This particular plant is just a mind-boggling specimen, in addition to being an important plant, [it’s] a plant that’s extinct in the wild … The collection of the Franklin tree by the Bartrams has outlived both the father and the son. It’s outlived Thomas Meehan, the nurseryman who sent it to the Arboretum. It’s outlived Charles Sargent, the founding director of the Arboretum. And I think it’s incredibly powerful to imagine that this particular plant will very well be here in 200 years and 300 years … This [is the] continuing living story of a relationship between people who observed and collected the plant and the plant as it has continued to grow.

Kate Stonefoot, the manager of visitor engagement, said the benefits of the Expeditions Mobile App are considerable, and include greatly broadening public outreach and education. 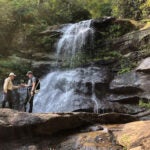 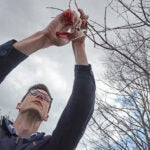 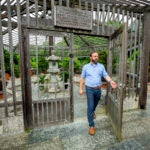 “Besides providing casual access to detailed, targeted information, there are profound benefits for individuals with hearing or sight impairments, as well as visitors for whom English is not their first language,” she said. “The Expeditions app allows us to share the story of the Arboretum and its world-renowned collection of trees in ways that will significantly enhance the visitor experience.”

“Behind each of our roughly 16,000 accessions lies a unique story — a story of journeys and collecting around the world, of amazing natural history, horticulture, and the aesthetic experience of observing our plants throughout the seasons and years,” said William (Ned) Friedman, director of the Arboretum and Arnold Professor of Organismic and Evolutionary Biology. “This app can enrich the experience of interacting with our photosynthetic brethren.”