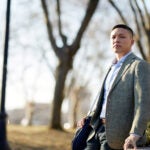 For Marion Dierickx, living in a socially distanced world is nothing new.

In fact, she does it for two to three months every year in one of the most extreme conditions on Earth: the South Pole. Dierickx ’12, A.M. ’14, Ph.D. ’17, is a postdoctoral fellow in the Cosmic Microwave Background Group at the Harvard-Smithsonian Center for Astrophysics. Every year she and some colleagues take the 9,000-mile journey from Cambridge to the Amundsen-Scott South Pole Station to build and maintain the BICEP/Keck microwave telescopes there. Life on the ice feels a lot like life in the U.S. during the coronavirus pandemic.

“In some sense, they are complete opposites but, in general, there’s also very clear parallels,” Dierickx said. “Here, you have to shelter in place because the outside is a dangerous place … venturing outside carries risk. You can’t forget your mask, your gloves. You steer clear of other people and heading into a store is like a whole expedition. Living in Antarctica is also like that, where the outside world is actively trying to kill you.” Temperatures never rise above freezing and can plummet to more than 100 degrees below zero Fahrenheit. “You have to be prepared [with the proper equipment each time], and it takes a mental toll every time you step outside.”

Another defining parallel: The internet and phone are necessary to keep up with friends and family. In Antarctica, it’s a little tougher because connection is limited, but she’s discovered that civilization comes with its own discontents.

Dierickx, who returned to Boston in January, now finds herself isolated in a different way. At the station she was surrounded by colleagues but cut off from the outside world. Here, she is “in the middle of a dense urban environment, the world’s knowledge at my fingertips thanks to a high-speed internet connection, but no ability to [meaningfully] connect in person with another human being.”

This is where lessons from the past come in handy. During her last trip to the pole, from October to late December, she made a big effort to connect with people outside her immediate team over the internet, and it paid off. “For the first time ever, I did not want to leave.”

She figured out that one way to avoid loneliness while distanced, socially or geographically, is “to diversify our social exposure through the phone, through different media, different social networks,” she said. “I think that’s a very healthy thing to do right now. Use that time to connect with people we don’t normally connect with. To reach out.”

Taking a lecture for a jog

Before the pandemic, Elena Glassman’s “Design of Useful and Usable Interactive Systems” course was a conventional “flipped” class. Thirty-minute mini-lectures by the assistant professor of computer science at the Harvard John A. Paulson School of Engineering and Applied Sciences were followed by individual and group exercises in which her 70 students practiced applying insights from the lecture to their group design projects.

“The format entails brainstorming, ideation, and introspection on the part of the students,” said Glassman, who is also the Stanley A. Marks and William H. Marks Assistant Professor at the Radcliffe Institute. “The big question was whether the psychological safety I’ve strived to develop in the class would transfer to this new online infrastructure. It takes courage to sketch something and share it on a document camera with 69 others.”

In week one of remote instruction, Glassman abandoned the goal of a synchronous lecture with students, who were situated in different time zones around the world. Instead she turned that part of her flipped class into a podcast.

“For every topic we talked about, there was an expert out there, and many are my friends,” Glassman said. “So instead of talking to a wall in my home studio — a.k.a. my dining room — I talked directly to the experts, recorded our conversations, and edited it down into an engaging podcast.”

The format allowed greater flexibility for students who could listen at their convenience — even while taking a run or walk — instead of having to sit before a screen at a prescribed time. Glassman’s podcasts are posted on her faculty website and available to all.

Glassman said she received some pushback about the audio-only format from students who learn best when they have something to look at, and she has explored options for adding a visual component to each episode should classes remain online come fall.

Creating an engaging podcast required significantly more effort than recording a solo lecture. For her first two episodes, Glassman estimated she spent an average of 4½ hours to plan, record, and edit each 45-minute segment. She invited each of her six teaching fellows to join her in interviewing an expert of their choice.

“It was really fun to see one of our TFs gush over Zoom to a researcher she’d followed online and finally got to talk to,” she said.

Students have 24 hours to listen to each podcast once it is posted. Glassman asks them to spend 10 minutes reflecting on the recorded conversation and its implications for their creative process and group project. They then submit a paragraph on the course Canvas site, discuss ideas with their groups, and develop a communal answer to post on a forum so students could see what others took away from the lecture.

“The solo answer helps me make sure that students got something out of the lecture,” she said. “In this different format, where I’m not relying on people to raise their hands, I get to read everybody’s 10-minute reflection on my lecture. I get a more thorough understanding of what got across and that is thrilling; I never had that before.”

Rachel Kahn ’20 knew she would miss much about school — friends, singing in the Harvard Opportunes, living in Leverett House. But she also longed for simple pleasures like the Harvard breakfast sandwich at Darwin’s Ltd.

“I wrote my thesis at the Darwin’s near Mather [House], and I hate to be home not having it,” said the senior from Lexington, Mass., who concentrated in history and literature with a secondary in women, gender, and sexuality studies. “My whole past year was working on that thesis, and everything it would take to do it. Getting that fun sandwich was a treat.”

So she recreated the sandwich — egg, bacon, cheddar, and avocado on a bagel — and posted it on Instagram. When Darwin’s reposted it, she was inspired to sate her hunger for other Harvard Square favorites as well.

She made &pizza’s American Honey, which features pepperoni, arugula, and hot honey, during Passover, so she replaced the crust with matzoh, and served up her best creation a la Tatte in the form of a ham and fried egg tartine.

“That tasted the most like the real thing,” said Kahn, who posts at @woohooitsrachel. “I don’t really know how to cook, which is why I mostly have been doing eggs, but it’s fun to experiment and work with the ingredients I have.”

She’s expanded to drinks, concocting Felipe’s margarita alongside the Mexican restaurant’s nachos. Next up may be the burger and beer punch from Cambridge Common.

“Some of the restaurants have commented, and I feel like an influencer,” said Kahn. “It’s so hard for them to not be fully open for business. This must be at least entertaining for them to see they have dedicated fans.”

The COVID-19 pandemic has upended Isabella Kwasnik’s life. Her senior year was disrupted by a campus evacuation, and her hometown of Staten Island, N.Y., is at the center of the outbreak in the U.S.

The one constant has been her virtual voice lesson.

“My voice lessons have been one of the most stabilizing experiences and a routine that carried over even though I’ve shifted locations away from Harvard,” said the Lowell House resident and history concentrator.

Kwasnik began taking lessons two years ago through the Music Lesson Subsidy Program at the Office for the Arts. She was paired with Katherine Fuller, a voice instructor at the Boston Conservatory at Berklee College of Music, and commuted to Boston every Thursday for lessons.

Now the sessions take place online. Fuller suggests mostly jazz and musical theater numbers, and Kwasnik practices in her bedroom at home. She records herself singing and emails the files to Fuller before each lesson. The two then review and “spot check” elements of the piece during their 30-minute meeting on FaceTime or Zoom.

Amid the upheaval around her, staying connected to the musical world feels essential to Kwasnik, who is also a member of the Harvard-Radcliffe Veritones. The group is not able to rehearse while its members are scattered around the world.

“Having a teacher who presents me with a challenge and gets my mind out of these otherwise darker times by giving me something I have to learn and invest in is very therapeutic and rewarding,” she said. “Music is the way we connect with people, and nobody is able to attend performances on a large scale, so I feel incredibly grateful that I have a way to connect to art. I sit at my laptop in a specific corner, and that’s the place where I can sing my heart out and have a really good time.” 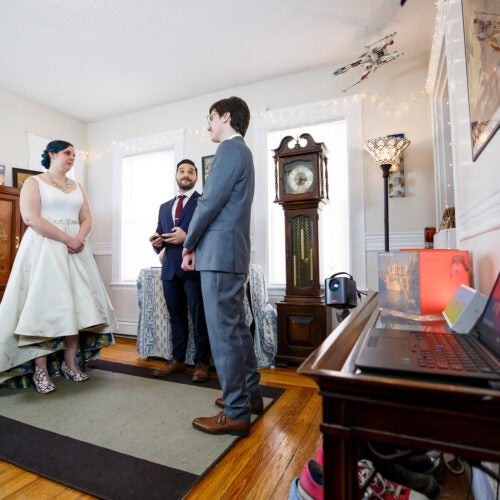 Snapshots of the widespread Harvard community: A Zoom wedding; reunion in St. Croix; challenges of teaching ASL online; and a taste of Cuba