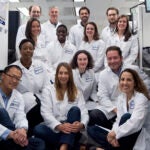 Responding to this pandemic, preparing for the next

Chan School grad is on a mission for environmental justice

When Saamon Legoski sees something wrong, he feels compelled to make it right.

Last year, for example, while working as a behavioral specialist and staff sergeant for the U.S. Army in Kuwait, he helped several of his peers and soldiers come forward with allegations of sexual violence. A formal investigation substantiated the allegations, he said, and the accused sergeant was discharged from the Army.

“I’ve learned to be disruptive in a positive way,” said Legoski.

These days, as a student in Harvard T.H. Chan School of Public Health’s M.P.H.-45 program, he’s focused on redressing the wrongs that arise when people, because of race, national origin, or income, are treated unfairly with respect to environmental laws and policies. He said it riles him that underprivileged neighborhoods are often the most polluted, that tax credits for electric cars predominantly benefit the wealthy, and that the world’s poorest communities bear the biggest burdens from global warming.

Legoski plans to become an environmental justice attorney — one who understands enough science to be an expert litigator in court. “At the end of the day, I don’t want the opposing counsel to fool judges, juries, or me with scientific-sounding nonsense,” he said. “I want to be a one-stop shop for interpreting scientific data in the courtroom.”

Legoski is clear about his goals these days, but that wasn’t always the case. His childhood was chaotic. He grew up in southern California, where parental disputes sometimes led to living in homeless shelters with his mother and younger siblings. He worked in school cafeterias to pay for his lunches. “I got better in high school, but in the earlier years, the disruption would come with me from the house to the classroom,” he recalled.

After high school he decided to join the military “to get away from everything” — and loved it. “It was the first place where I challenged myself and leaders really encouraged me,” he said. “Plus, in the military I found a lot of people who had the experience that I did. Growing up I was usually the poorest kid, the least well-dressed, usually just the ‘least’ among people. But when I got to the Army, I was on pretty equal footing with a lot of people.” He says the Army helped him mature and straighten out his rough edges.

During his yearlong deployment to Afghanistan, Legoski saw scores of what he thought were needless deaths, and fellow soldiers suffering post-traumatic stress. The experience cemented his interest in psychology, and also led him to think deeply about how to avoid war. “The Afghanistan war led me to believe that our political leaders weren’t effective at conflict resolution and would keep us in Afghanistan indefinitely,” Legoski said.

In 2013 he enrolled at Stanford to study psychology. He chose as his adviser social psychologist Lee Ross, who had done real-life conflict resolution work in Ireland, Israel, and other parts of the world. “I spent a lot of time in and outside of class picking his brain about political and social conflicts and pathways to resolution,” Legoski said.

During a Stanford quarter in Washington, D.C., Legoski took a seminar in civil rights law and learned about “disparate impact,” which occurs when laws or rules negatively impact a particular group of people. “It’s up to civil rights lawyers to prove disparate impact through testimony, data, and analysis in the courtroom,” Legoski said. He decided that becoming a lawyer “would be a good career match for my strong sense of justice,” he said.

The field of environmental justice caught his attention when he spent a year as an executive fellow in California’s Department of Toxic Substances Control, working on projects to keep consumers and workers safe from the toxic chemicals found in some nail products. The field “had all the civil rights components that I want and I love,” he said.

Thanks to support from the Harvard Presidential Scholars Program, Legoski was able to come to Harvard Chan School to get the science background he wanted. In a class last fall on analytical methods and exposure assessment, he and a group of fellow students studied the role of compostable beverage containers in microplastic contamination.

Jonathan Buonocore, research scientist at Harvard Chan School, advised Legoski and the other students on their research. “With the issue of plastics, we have been hearing about impacts on sea turtles and pollution on beaches, but Legoski wondered if humans are getting exposed to microplastics through compostable cups,” he said. “He took it upon himself to find a way to address the question.” Previous studies have suggested that microplastics consumption may harm health. The students found significant leaching of microplastics from some of the compostable cups they looked at.

While at Harvard Chan, Legoski has done field work at Clean Water Action, an environmental advocacy group. Last fall he spoke on the organization’s behalf to a Massachusetts Department of Environmental Protection panel about the health impacts of the Wheelabrator Saugus incinerator, the nation’s oldest. He also spoke at a Massachusetts Department of Transportation board hearing about the need in underserved communities for better public transit service, lower fares, and reduced transportation-related pollution. On campus, he serves as a student ambassador for the Center for Climate, Health, and the Global Environment (C-CHANGE), helping promote collaborations among departments to address environmental issues.

“He’s definitely a driven individual and has a good line of sight on how to use both scientific evidence and the legal mechanisms we have to improve public health and, in particular, right environmental justice wrongs,” said Buonocore.

“What I love as an environmental justice advocate and future lawyer is that I will be able to tackle civil rights from a perspective that takes many issues into account — environmental issues, housing, transportation, job insecurity, food costs— that are often treated as separate issues by policymakers,” said Legoski. “It’s a field where I’ll be able to channel my passion for helping people and making sure there’s justice.”