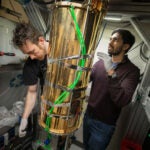 Billions of people worldwide marveled at the first image ever captured of a black hole. The photo of the glowing, blurry doughnut, taken by the Event Horizon Telescope (EHT) team, showed the massive dark region, a monster the size of our solar system, that, like its peers, gobbles up everything — even light — that ventures too close.

“I definitely got shivers down my spine,” said Alexander Lupsasca, a junior fellow in Harvard’s Center for the Fundamental Laws of Nature, remembering the moment he saw the photo for the first time. It was thrilling because so very little is known about black holes. And now, Lupsasca and a team of scientists at Harvard’s Black Hole Initiative say the image may help provide more answers: Hidden within the glowing ring are an infinite number of sub-rings that offer a way to capture an even higher-resolution image and more precise data on the massive enigmas of the universe.

“They’re paradoxical objects. They’re the epitome of what we don’t understand,” said Andrew Strominger, the Gwill E. York Professor of Physics at Harvard. “And it’s very exciting to see something that you don’t understand.” Black holes are one of the great puzzles of modern physics — where Einstein’s Theory of Relativity and quantum mechanics collide. Scientists still know so little about them — their mass, how fast they spin, what’s inside their warped space-time. Until the EHT produced the first actual image, Strominger could only investigate their mysteries with complex mathematics, pencil, and paper. “I cried when I saw their picture,” he said. Then, he asked: “What can we learn from this?”

The fear, Strominger said, was that the image would only reveal information about the swirling, glowing stuff, which is mostly gases heated to billions of degrees and back-lit by light looping around and around and around. The black hole, “the prize in the middle,” as Strominger called it, casts a shadow on that jetsam, gifting the scientists with a few nebulous clues about its mass.

The photo brought theorists — like Strominger — together with observers like Michael Johnson, first author on the EHT team’s recent study published in Science Advances and an astrophysicist with the Black Hole Initiative. “It’s an example of how a new result can prompt these unexpected, new collaborations,” Johnson said.

Together, the interdisciplinary team discovered the doughnut is not just one doughnut but a collection of sub-rings of light bending in thinner loops the closer they get to the black hole’s event horizon — a boundary around the hole, which is the point of no return where matter and even light disappear to no one knows where. Right outside that is what the team calls the photon shell. “In that region,” Lupsasca said, “gravity is not strong enough to capture the light rays forever, but it’s strong enough to deflect them so much that they go around in circles.” Nothing can bend light like a black hole.

“[Black holes are] paradoxical objects. They’re the epitome of what we don’t understand.”
— Andrew Strominger

As Strominger feared, an image of just one of those rings gives information about the inferno outside the black hole but not much about the “prize,” he said. But the team has a solution for that: With an image of a second ring, they can compare the black hole at two different periods of time. Each ring is like a mirror image of the black hole at different points in its history, not unlike the rings of a tree. So, like the infinite reflections of a person surrounded in mirrors, the stacked images provide enough data to learn the black hole’s essential properties: mass and spin.

The rings also betray how the black hole warps space-time. Their individual brightness, thickness, and shape depend on the monster’s manipulation of its surrounding geography. In reality, the rings are far from perfect circles — like a bug caught in the gravitational pull of a drain, each one weaves a warped path around the black hole’s bizarre landscape.

Here’s where things get stranger: A black hole hoards images of the past. Light is composed of photons, and each one carries a bit of the image of whatever it hits. So when you see a tree the light hits the tree, bounces to your eye, and your brain eventually pulls it all together like a mosaic. Light stuck in a black hole’s gravitational pull can loop once, twice, or an infinite number of times, depending on its angle of approach, Lupsasca said. Those that finally escape in the direction of Earth carry a reflection of what the universe looked like when they entered the black hole’s pull. The longer light was held captive, the earlier in the past their image shows.

“As we peer into these rings, first, second, third, etc., we are looking at light from all over the visible universe; we are seeing farther and farther into the past, a movie, so to speak, of the history of the visible universe,” said Peter Galison, the Joseph Pellegrino University Professor of the History of Science and of Physics, in the Black Hole Initiative’s press release.

To capture the original image of M87’s black hole, the EHT crew needed a telescope the size of the Earth. Since they couldn’t build an instrument that big, they created a virtual one, connecting multiple radio telescopes from across the world to provide different pieces of the black hole puzzle.

Normally, said Johnson, this form of observation — called interferometry — requires more than two telescopes. But the black hole’s rings have a special property: They encode their properties in a distinctive oscillating signature. Because of that signature, Johnson said, “You can tell everything you need to know about the ring with just two telescopes.” 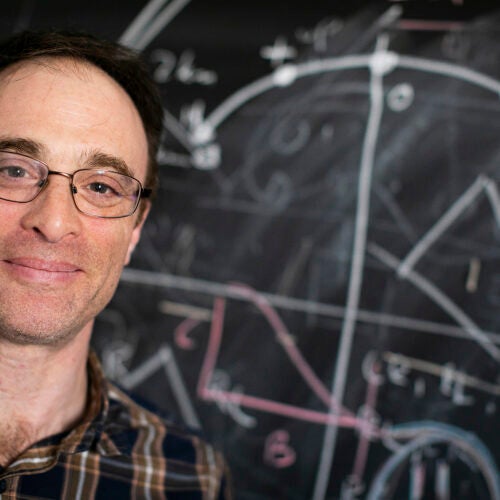 The Black Hole Initiative already has one — the virtual Earth-sized telescope they used to see the first ring. For the second, they only need a longer baseline between the two — one in orbit or on the moon would work. The longer baseline could improve the resolution of the original photo by a factor of 100, Johnson said.

This year, the COVID-19 pandemic prevented the EHT from capturing a new image of the M87 black hole. April is the only month when the weather is clear enough across the world for each telescope to obtain a clean shot. “That’s been heartbreaking,” said Johnson.

Still, the team is hopeful they’ll capture higher-resolution images of two sub-rings in about 10 to 20 years — a short time, considering the first image of a black hole is only one year old.