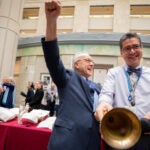 At graduate Schools, reinvention on the fly

The coronavirus outbreak has pitched financial markets into turmoil and raised the likelihood of a deep global recession, leaving entire industries, including higher education, scrambling to adjust to what could become an existential threat. Colleges and universities, including Harvard, have already experienced significant additional costs, as they took unprecedented steps to reduce risk to their community members.

At Harvard, the decisions to send students home for the rest of the semester and move classes online, while prorating room and board and providing moving assistance, have all occurred while the majority of expenses the University incurs has remained the same. The Gazette spoke with Thomas J. Hollister, vice president for finance and chief financial officer at Harvard, to learn more about the planning the University had already undertaken to prepare for the eventuality of a financial downturn and how the emergence of the coronavirus might affect the University’s finances, along with those of the nation’s other  institutions of higher learning.

Gazette: What can you say about the state of higher education’s financial health, broadly, and Harvard, more specifically, with regards to the potential fallout from the coronavirus pandemic?

Hollister: Even before the coronavirus outbreak, the financial health of the higher education industry was under stress as evidenced by recent closures and mergers of schools. The pandemic will put an additional, enormous strain on the industry. Harvard is relatively well resourced compared to many other universities, but contrary to popular perception, Harvard does not have unlimited wealth. It’s true that our endowment is large on an absolute basis, but it is committed to supporting existing vital academic programs and campus activities. In short: Every penny of the annual distribution from the endowment is subscribed and utilized in support of our mission.

Gazette: Is Harvard prepared to weather a recession, then, should it happen?

Hollister: We’ve done a lot of recession-based scenario planning, and the University is in a much better position than we were following the 2008 financial crisis with respect to liquidity and the capacity to withstand stress. Thanks to purposeful planning by Narv Narvekar and his colleagues at Harvard Management Company, the endowment is comparatively liquid, does not have any substantial derivative exposures, and is not broadly leveraged. In addition, the University itself, which provides working capital to the operating activities across campus, is in a healthy and liquid position. This means that the University is positioned to withstand an interruption in normal operations, an economic downturn, and other stress scenarios. These efforts put us in a good position and give us the ability to focus on aligning our resources behind our academic mission, but they will not eliminate adversity or difficulty in the event of a recession. Given what is happening, we expect to see a decline in revenues due to, for example, increased financial aid needs, a slowdown in philanthropy, and a lower distribution from the endowment, and we will need to adjust our spending accordingly.

Gazette: Tell us more about recession planning, and what that looks like at Harvard.

Hollister: About 18 months ago, we set out to study how Harvard reacted in the 2008 economic downturn, in order to learn lessons of the past and to ready ourselves for the next recession. President [Larry] Bacow and the Corporation Finance Committee provided the guidance for this effort.  We interviewed past and current leaders across the University, leaders and experts in higher education outside of Harvard, as well as members of our Corporation and Finance Committee. Through these conversations, we developed a framework for recession planning, as well as a list of potential actions the University could take to ensure resilience in our teaching and research — even during times of financial hardship. In September 2019, we publicly shared a version of our findings in a “recession playbook”’ which is titled “Financial Resilience at Harvard.”

“We don’t know what the depth and duration of this downturn will look like or how it will rebound, and so it’s wise for us to plan and prepare for the worst.”

Gazette: Did the Schools have a role in all this?

Hollister:  Under the direction of their deans, each of Harvard’s Schools as part of the annual multiyear financial-planning process, as well as the annual budgeting process, examined how an economic downturn could impact their operations, and they began to scenario-plan different responses. Organizations that are carefully monitoring their resources do this kind of planning on a regular basis, and Harvard is no exception. We wanted to be prepared in the event that our revenues were diminished in order to try to concentrate our resources on the vital core mission of teaching and research. Again, these efforts will prove very helpful, but they will not eliminate challenges or difficult decisions in the event of a recession.

Gazette: Did the University have an opportunity to begin to take any actual steps before the outbreak?

Hollister: As a parallel part of this effort, in the second half of last year we repositioned our (non-endowment) central resources to have less exposure to the markets and to carry more liquid fixed income securities than we have held in recent years, as a cushion for managing through a recession. Again, these efforts will prove very helpful but they will not eliminate challenges or difficult decisions in the event of a recession. In addition to strategically conserving resources, there is a forward-looking aspect to recession planning, which is to be on the lookout for opportunities, as well as very select investments, that would position the University to come out stronger as an academic enterprise after an economic downturn. As President Bacow is fond of saying, “Races are won on the uphill.”

Gazette: If a recession does materialize, how might the University be forced to respond?

Hollister:  We are already examining and reducing all discretionary, nonessential spending.  There are other places where we can look to reduce costs, beginning with slowing the pace of capital projects, limiting the use of consultants and third parties, and renegotiating contract costs and terms with outside suppliers. Everyone can help identify opportunities.

Hollister: We don’t know what the depth and duration of this downturn will look like or how it will rebound, and so it’s wise for us to plan and prepare for the worst. This downturn could be more severe than 2008. There is, however, a lot of uncertainty so we want to avoid either under- or over-reacting, and yet ensure that we’ve properly planned for any potential unfolding scenarios, and have appropriate measures on the ready to best weather the storm, and also assure our community that we are mindful of the uncertainty these economic challenges bring. What we do know is that a lot of Harvard’s expenses are somewhat fixed, and any actions that we take must be strategic and focused on our mission priorities.

Gazette: So what will decision-making look like going forward?

Hollister: Harvard’s Schools may need to make hard decisions over the next 18 months. What we learned when we interviewed people who were involved in the ’08-’09 recession, though, was that our community took solace and pride when decisions were made with teaching and research at the top of the list. There are pluses and minuses to decentralization, but one great advantage we enjoy is that the deans of Harvard’s Schools have authority over their School resources and are used to making decisions locally in the best interests of each School and their mission, although in coordination across the University. The voices of the past and present all state that our mission centers on faculty and students, as well as our learning and research environments, and that is what needs to be most sustained and supported. I’m confident we’ll continue to be able to support this purpose moving forward, although not necessarily without difficulty, thanks to the commitment of our president, provost, executive vice president, the deans of Harvard’s Schools, and many like-minded individuals across Harvard.