Hot fun in the wintertime 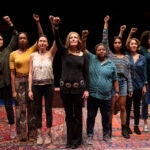 A selection of upcoming local theater, music, and art events around Boston and Cambridge

What would it take to make your winter more interesting? A stage full of singing, dancing mean girls? A flashback to a golden era of Japanese art? Or maybe a visit by a forefather of electronic music? All this and more are happening on the arts scene in the winter months.

It’s an oft-forgotten bit of Boston history that Malcolm Little lived here as a young man, where, on his way to recreating himself as Malcolm X, he was known in Roxbury as “Detroit Red.” The celebrated writer/actor/rapper Will Power tells this story in “Detroit Red,” a new piece that combines the historical record with hip-hop lyricism. Power has explained, “I was interested in this young man who was kind of wayward, kind of a gangster, and kind of confused, and yet went on to become Malcolm X. What allowed him, pushed him to be that, when other people don’t?” The Broadway-bound play has its world premiere at Emerson’s Paramount Center Feb. 1‒16.

The Pulitzer Prize-winning and Tony-nominated play “Sweat” made its debut four years ago, but its concerns seem to grow more timely by the year. Playwright Lynn Nottage explores a big topic, the collapse of the American working class, through individual stories revealed in a bar in Reading, Pa., including those of two friends who have a tense reunion after serving prison time. The Chicago-bred director Kimberly Senior, who directed the Pulitzer-winning Broadway production of “Disgraced,” has updated “Sweat” for the Huntington Avenue Theatre production, which runs Jan. 31‒March 1.

If you cried over the goodbye scene in the BBC-TV/Amazon series “Fleabag,” solace is at hand. Devotees know that the television production was based on a one-woman show by the TV production’s star and creator, Phoebe Waller-Bridge. Last fall Waller-Bridge performed her play about an emotionally complicated London woman and her spectacularly dysfunctional love life for broadcast by Britain’s National Theatre Live. The performance was screened at a limited number of U.S. theaters. There will be one more round of these shows — not live this time, but a “prerecorded encore” — at the Emerson Paramount Center Jan. 31‒Feb. 2, though tickets only remain for the Feb. 1 matinee. Fans of Waller-Bridge can then start anticipating the April release of the new James Bond movie, “No Time to Die,” which she co-wrote.

Tina Fey gave high-school rivalries and social rituals everything they deserved in “Mean Girls,” which became a runaway hit twice: in 2003 as a movie, and in spring 2018 when it opened as a musical on Broadway. (Director Casey Nicholaw has another recent smash, “The Book of Mormon,” to his credit.) The touring version hit the road last year, and it plays the Opera House through Feb. 9. Those who grew up with Fey’s tale of fear and loathing in an Illinois classroom should find it’s lost none of its wicked wit.

Here’s one that boomers will be more than OK with: The New Rep has a revival of the iconic ’60s musical “Hair,” the show that taught Broadway about hippie-dom. The only major musical by the team of Gerome Rangi and James Rado, the 1967 play dragged the antiwar movement and the sexual revolution into the mainstream and produced a few hit singles (you’ll probably remember “Easy to Be Hard,” “Aquarius,” and the title song). Genuinely transgressive in its time, the show is now being promoted as “a nostalgic and groovy experience”— 50 years will do that. The new production is at the New Rep now through Feb 23.

Beginning on Valentine’s Day, the Harvard Art Museums will present one of the most comprehensive exhibits yet of early modern Japanese art. The Edo period (1615‒1868) was a fertile one for Japanese culture: A new era of peace and prosperity was at hand, and Japan opened up to outside-world influences. Much art from this era is distinguished by its exuberance, and by a juxtaposition of opposites: past with present, vulgar with refined. Two of the world’s foremost Edo art collectors, Robert S. and Betsy G. Feinberg, have opened their collection to Harvard for “Painting Edo,” which features works on scrolls, folding screens, sliding doors, and fans, and in woodblock-printed books. Timon Screech, an art historian at the School of Oriental and African Studies, University of London, opens the exhibit with a lecture, “Into the Kaleidoscope: Painting in Edo Japan,” at 5 p.m. Feb. 13. The show runs through July 26.

The Harlem-born artist Tschabalala Self produces paintings and collages that celebrate and exaggerate the human figure, most often African American women. She mixes media — fabrics, textiles, and recycled pieces of her own work — which, she has explained, allows the bodies to “defy the narrow spaces in which they are forced to exist.” They also allow the artist to explore issues of gender and cultural identity. “Tschabalala Self: Out of Body,” which opened Jan. 20 at the Institute of Contemporary Art, is both the first Boston exhibit she’s done and the largest showing of her work to date.

Winter months are usually the slowest on the music front, but even a slow season in Boston is still pretty good. The biggest name coming in the next two months is also the youngest: Billie Eilish, the L.A. songwriter who turned 18 before Christmas and just picked up five Grammy Awards on Jan. 26. With her heady electronic pop and deep and dark lyrics, she might have seem destined to become an alternative rock cult figure; instead, she turned out to be the best-selling artist of 2019 and (so far) the biggest musical star born this millennium. She’s also one of the first artists to headline the Garden with just one album to her credit. She’ll be there March 19.

Speaking of cult figures, Bat for Lashes — the band alias of English singer/songwriter Natasha Khan — made one of last year’s biggest critical hits with “Lost Girls,” an enticing homage to lost-teen films and ’80s synth-pop. The live version should be something to see, and she’s at the Sinclair Feb. 17. Another songwriter of note, local resident Juliana Hatfield, has been writing resonant songs since she fronted the Blake Babies in the ’80s — that band, by the way, got its handle when they went to a Harvard reading by Allen Ginsberg and asked him to name them. Most recently Hatfield did a full album of her favorite songs by The Police, and she’ll play those along with her originals at Once in Somerville on Feb. 12.

On a good night, Athens, Ga.’s Drive-By Truckers is one of the greatest roots-rock bands you’ll ever see, equal parts righteous anger and guitar-slinging celebration. The group’s new album, “The Unraveling,” is full of the former, but expect plenty of the latter when the Truckers hit Somerville Theatre on Feb. 22. You’ll get your money’s worth, since the band tends to play epic-length shows.

It’s no stretch to call Terry Riley one of the greatest living figures in experimental music. He explored tape loops in the 1950s, absorbed Indian ragas before the Beatles made them fashionable, and pioneered the use of exotic keyboards. His late-’60s composition “A Rainbow in Curved Air” was widely influential (among others, The Who and The Velvet Underground claimed they took ideas from it). As a preamble to his 85th birthday in June, Riley is doing a string of retrospective shows, one of which hits Sanders Theatre on March 20. A more familiar sound at Sanders is the majestic vocal blend of Ladysmith Black Mambazo, the South African choir whose annual visits are always jubilant affairs. The band will play there on Feb. 2 at 2 p.m.